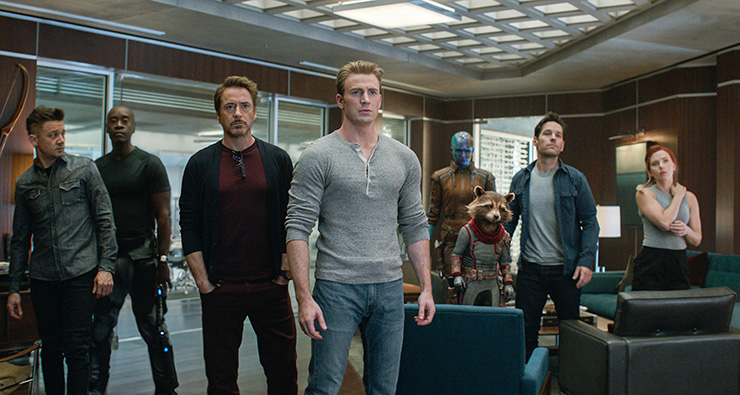 The curtain call is here. The showdown a decade in the making is finally before millions of eyeballs ready for worship at the altar of the Marvel Cinematic Universe. On those terms, âAvengers: Endgame,â the big-screen series' 22nd chapter and the third Avengers sequel (if you don't count âCaptain America: Civil Warâ), delivers the vast-scaled goods with an economy of storytelling that manages to incorporate aspects from every single one of its predecessors. No way around it: That's a Herculean feat worthy of its superpowered characters' abilities.

So why does the bulk of this three-hour opus play like a subpar season finale of âDancing with the Starsâ? 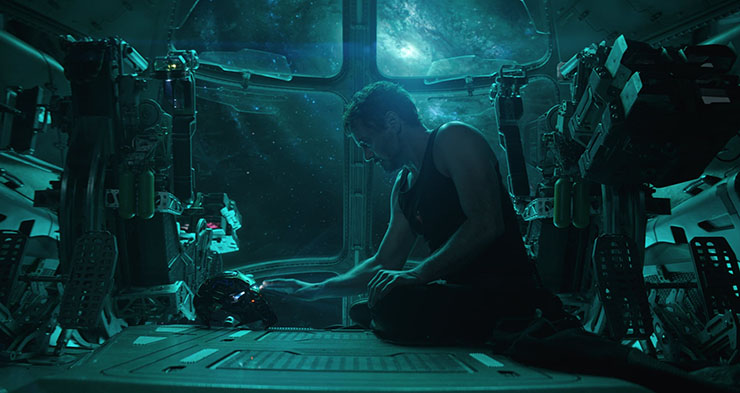 âEndgameâ is the MCU catalog writ large, a jumbo-sized variety-hour showcase of everything the movies' devotees clamor for. It unfolds as if it was assembled by the most mainstream corners of Film Twitter,â a greatest-hits Frankenstein monster that carries the weight of an entire studio's output on its shoulders with surprising agility. (It should have been titled âViewer's Choice: A Marvel Revue.â) But it's not exactly rough around the edges. It's more of a sleek, powerful android that can absorb a supercomputer's worth of data and blend it into its narrative like a DNA strand's double helix.

But intriguingly enough, it doesn't start out that way. Directors Anthony and Joe Russo know they have to make amends after leaving viewers hanging for an entire year. âEndgameâ immediately follows the apocalyptic ending of âAvengers: Infinity War,â a shorter but clunkier spectacle that was disingenuously sold as a be-all, end-all confrontation that would cost the lives of some of the MCU's biggest guns. (Spoiler alert: That's not quite how it played out.) 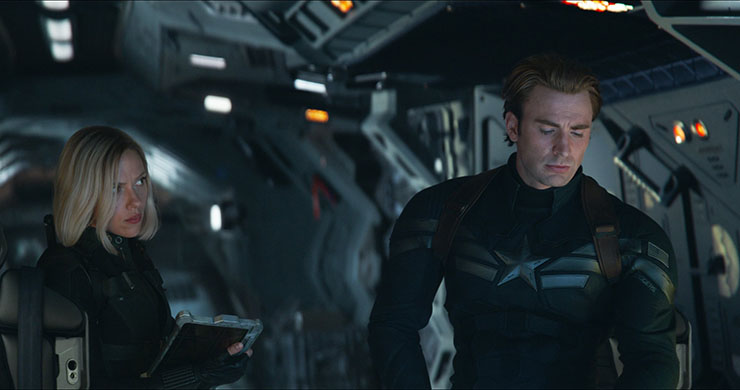 So the filmmakers do something interesting: They try to embrace the characters' pain. There's a deliberate delay on the slam-bang action one comes to expect from these tent poles in order to deal with the emotional fallout of the Big Snap. (Stop reading now if you still haven't seen âInfinity War.â Why would you be reading this if you haven't seen âInfinity Warâ? Wait, you haven't seen âInfinity War?â I'm so jealous of you right now.) Thanos, a capably rendered CGI baddie with a purple body and Josh Brolin's baritone pipes, wiped out 50% of all living creatures and fled, leaving in his wake shellshocked survivors and gray dust where those who were snapped into oblivion once stood.

So Act 1 of âEndgameâ is more of a regrouping/therapy session than the opening salvo of an everything-but-the-kitchen-sink epic, and the glum brooding, while one-note, is nevertheless a welcome change of pace. Sure, HBO's âThe Leftoversâ navigated this territory with far more nuance and care, but the stab at grappling with complex emotions merits acknowledgment. Heading the Mope Patrol are Steve Rogers, aka Captain America (Chris Evans), now back to his Ken-doll cleanshaven look after rocking a rather stern beard in âInfinity War,â and Natasha Romanoff, aka Black Widow (Scarlett Johansson), still licking her wounds over the abrupt departure of Bruce Banner, aka the Hulk (Mark Ruffalo), uh, how many movies back? Does it matter? 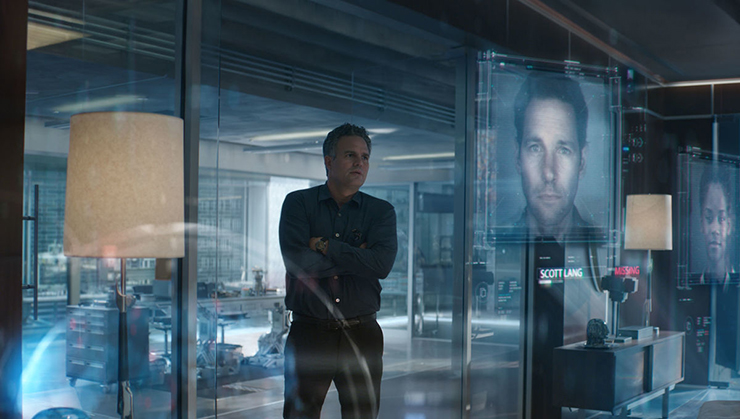 Lo and behold, Tony Stark, aka Iron Man (Robert Downey Jr.) and Scott Lang, aka Ant-Man (Paul Rudd) may have come upon a possible solution to Thanos' genocidal actions. That development redirects âEndgameâ along a more familiar path. (I wouldn't dream of revealing more specific details, but if you want your initial viewing to be as unspoiled as possible, stop reading here.) Here's what I can say: The surviving characters' journey come across less than against-the-clock efforts to bring about another opportunity to save the day than a shameless excuse to take viewers on a trip down memory lane. It's not the most fluid structure that screenwriters Christopher Markus and Stephen McFeely have come up with, but it's a marked improvement over âInfinity War'sâ inelegant back-and-forth lurching between characters and storylines. This is a three-hour movie where you only feel the length at roughly the two-and-a-half-hour mark, which considering how many moving parts the filmmakers are juggling, is mighty impressive.

The problem is that by the time âEndgameâ winds its way to its pull-out-all-the-stops climax, you're exhausted from the narrative calisthenics you've had to endure to get to this moment. Thus a moment that could have been powerful and cathartic plays like an elaborate variation on those raise-the-roof flourishes from past Avengers adventures, only, you know, bigger. Not all the fan service here is bad. There's one shot encompassing years' worth of female Marvel heroes that had my inner comic book geek beaming with joy. 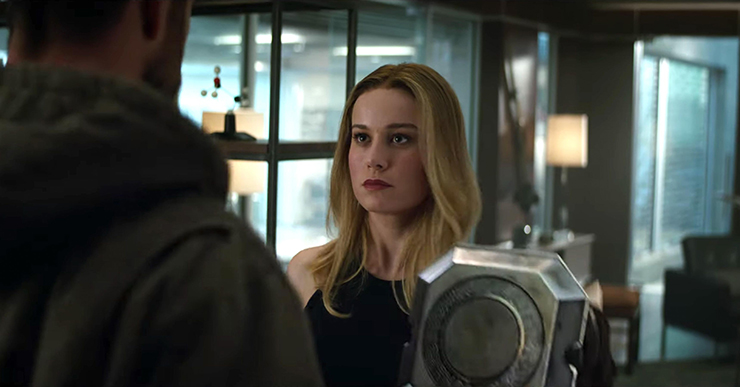 The bottom line is that âEndgameâ is better than âInfinity War,â so if you've liked what you've seen so far, never mind this sourpuss' grumblings. But there's no escaping that âEndgame'sâ ambitious agenda is hampered by the obligations those running the MCU have imposed for their silver-screen cosmos. What could have been a swift and nimble yarn is bogged down by a checklist of fan-favorite moments going all the way back to the first âIron Man.â The Russos dot every âiâ and cross every âtâ when they should be trying to weave in novel elements that suggest what the future of the MCU will look like. But for all its galaxies-spanning scope, the film feels at once drawn out and limited, even more so when considering it's coming out four months after the endlessly inventive âSpider-Man: Into the Spider-Verse.â

But try telling that to the masses who purchased tickets at least a month ago, only to discover theater chains will be showing the hotly anticipated title around the clock during its first few days of release. If the multiplex showtime schedule feels like a school curriculum, you're not that far off. Trying to keep up with all the characters and tangential story details feels at times like taking a quiz for which you haven't studied. There's a clear emotional engagement from the filmmakers' part that goes a long way toward making their audience groveling palatable, but when they remain so intent in playing a game of âspot that reference,â that investment's resonance largely goes out the window. 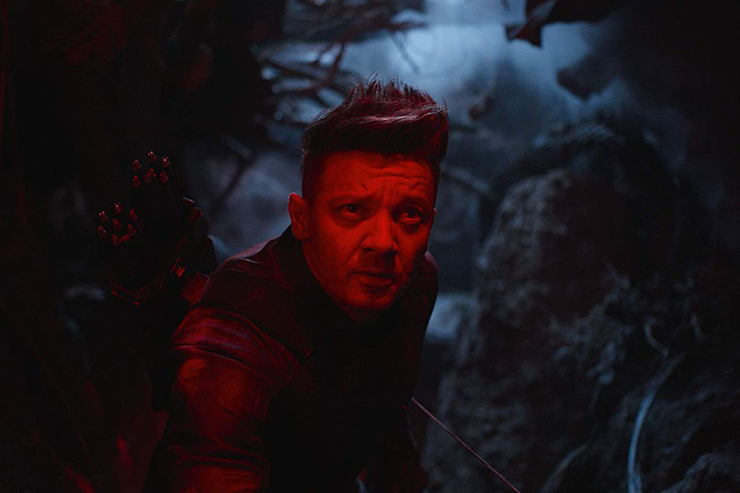 âEndgameâ will ultimately have some value in future viewings as a thesis statement in defense of the MCU's assembly-line approach to world-building. âSee, all those little things that were apparently unrelated (and superfluous) in some of our films did have a purpose after all,â the Russos appear to be saying here. They all led to this extravaganza that yearns to appropriate the distinctive sensibility of Joss Whedon, who helmed the first two âAvengers,â with a dash of Peter Jackson in trilogy-capping âReturn of the Kingâ mode, without quite reaching either filmmaker's flair. The pieces may all fit together like a mammoth jigsaw puzzle, but what's sorely lacking is spontaneity, that final-chapter frisson of anything-goes tension. âEndgameâ is tame pageantry, a love letter to fans that rings hollow because it's hopelessly stuck in the past. But don't let me stop you from checking your brain at the box office.

âAvengers: Endgameâ starts Thursday night in wide release in standard and IMAX, including engagements in 3-D. The latter would not be advisable, as 2-D was enough to induce a headache for this reviewer.