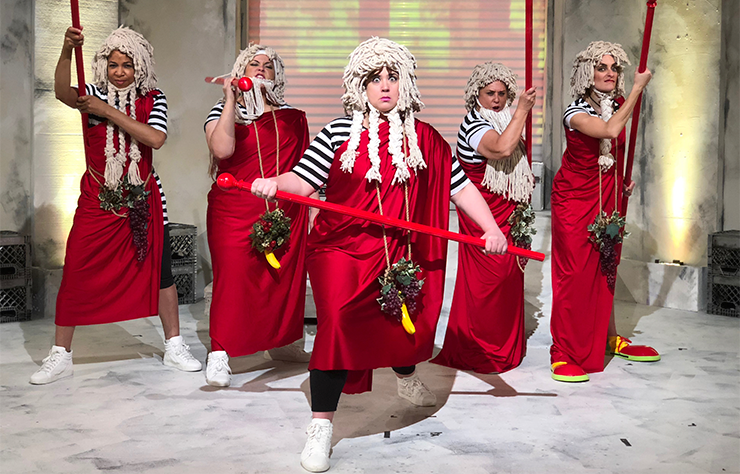 I usually never insert myself in the first person into reviews. I was trained as a journalist to write as an observer. I preface this review by saying that because, another truth be told, I don't read others' reviews before I write mine, and I don't follow threads on Facebook.

So, for those of you who have somehow been involved, whether directly or indirectly in threads and discussions about Thinking Cap Theater at the Vanguard's production of "Women In Assembly," possibly, or probably, you know more than I do.

The only reason I bring this up is because of questions tossed my way about aforementioned subjects, of which I appear perplexed and confused about conversations and critiques regarding the Nicole Stodard directed, and originally adapted, play. You can say it's all Greek to me!

I am a bit late, too, in covering this show as it opened at the end of February, and, because of other commitments I was only able to see the play last weekend. It closes this weekend in Fort Lauderdale.Â

I come to this review as a blank slate â unblemished by any discussions or others' comments or writings. For those of you reading this that don't have a clue what I'm talking about, no worries. You're approaching this review as I approached Thinking Cap's play. Untarnished.

Now to the review.

Aristophanes' Assemblywomen dates from 392 BCE. His plot? Fed up with the mess Athenian men have made of things, the townswomen, under the leadership of a feisty female named Praxagora, plot to infiltrate the all-male assembly and turn it over to women.

"Women In Assembly" doesn't veer much from the wording of the original script, which is what makes the phrase "the more things change the more things stay the same" continually come to mind.

Despite the language, which is ancient in its composition, these folks are faced with problems in politics like we have today.Â  Obviously, Athens and Washington, D.C., have a lot in common. There's also the issue that came to fore with the #metoo movement recently, headline news of men wielding their power to control women, especially in sexual matters. "Women in Assembly" has much ado about the #metoo movement, too! 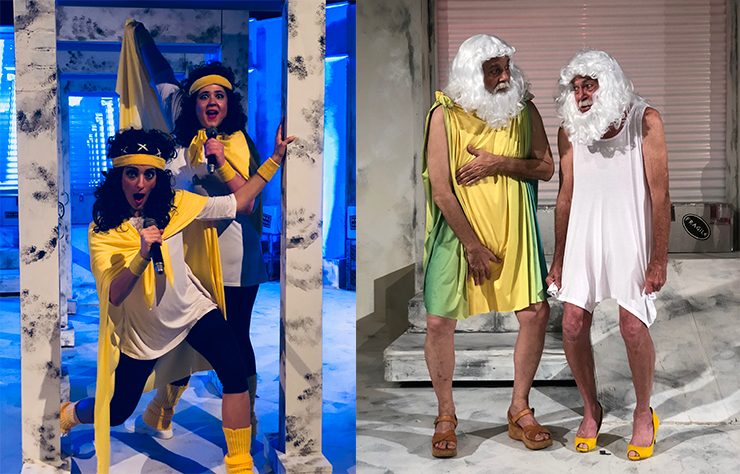 Where the presentation differs, according to director's notes is that, back then, the story of the women taking over the men's assembly was performed by an all-male cast for an all-male audience.

Stodard let's the words speak for themselves, drawing insider laughs from her 21st century audience who obviously relates to the dilemmas of the ancients to ours in the modern.

"We get a proposal to launch a fleet of ships. What happens? Well, the wealthy will vote 'yes,' but the poor and the farmers will vote the opposite."

In today's Washington, D.C., isn't the conversation the same?

Built into this production is a cheeky undertone that can best be described as the constant wink. It's almost as if there's a wide eyed, "can you believe this was written so many centuries ago and we're still going through the same bull?" Casey Dressler as Praxagora, the rabble-rouser and leader of the "Women In Assembly" adds to that wide-eyed, who me? that puts "Assembly" smack dab in the center of the age-old philosophical question: "How can we still be in many of the same situations even though centuries have gone by."

Dressler's Praxagora instructs her women to steal their husband's cloaks and staffs, and when they show up to get ready for assembly, the women must put on their beards (which look like the bottoms of rag mops), and practice their deep manly voices. Her partners in crime are Sally Bondi, Vanessa Elise, Carey Brianna Hart, and Sabrina Lynn Gore, who work in tandem as a tight knit ensemble, each playing off one another's characterizations. Each actress gets their time in the spotlight, too, playing various characters. They are given antics aplenty.

Antics aplenty are given to the men of the show, too, who, in "Women In Assembly" are consistently puzzled over how the tables have turned where now they are the weaker sex.

Michael Gioia as Praxagora's husband, spends much of the show in a short, yellow dress and chunky, wedge sandals, and Jim Gibbons as Pheidolos, also wears a short, yellow dress, except with a large bush of white hair coming from underneath, and high heels that are a size too large. Gibbons (who was so wonderful in Thinking Cap's "Unproduced Screenplay About The Death of Walt Disney") and Gioia are invested in the words, and actions, at every turn. They are two of the finest actors in South Florida theater, and they don't miss any opportunity to show their skills here. Gibbons' teetering around on heels, and Gioia's shuffling up an incline in the wedges create laughs without even saying a word.

Noah Levine is one of two other guys in the show. For most of "Assembly," he's covered from head to toe in a red stocking as a non-speaking mannequin. In the second act, he's rock star Epigenes, who gets #metoo-ed by three hags and a man in drag as Snow White (Carlos Alayeto as a giddy, giggling Snow White is laugh-out-loud funny as he steals much of this scene) in one of the most creative highlights of the show. Alayeto also doubles as old man Chremes.

There are obstacles to combat in "Women In Assembly." The ancient language is difficult for a modern audience (much like Shakespeare), but the actors and director work hard with plenty of subtext to make it at least understandable.

There are 1980s references that don't seem to tie together. One scene where Gore and Dressler sing Bonnie Tyler's "I Need A Hero," while fashioned in "Let's Get Physical" get ups was confusing. There are a few disjointed elements such as these, which, if addressed would make the play hang together better.Â

Here's a plus for those of us who have come to brace ourselves for sitting through plays that seem to drag on and on. This one moves at a clip, and considering its roots, you wouldn't expect that. (The play runs about an hour and 45 minutes with a short intermission.)

There is much that has gone into this creative endeavor that makes it one of the most original pieces of late seen on a South Florida stage. Thinking Cap continues to take chances â "Straight White Men" comes to mind from last season, as do so many others.

There are small touchesâattention to detail â that shouldn't go unnoticed, and a grasp of clever comedy. There's a tip to the queen of female comedic strength, Lucille Ball. A pita making bakery is a definite throwback to the famous "I Love Lucy" chocolate factory episode. You know the one, where the conveyor belt speeds up at the factory and the two gals are stuffing their faces and blouses with candy? There's another Lucy episode that's referenced, too, where Lucy and Harpo Marx create mirror images of one another.

The set design, an all whitewashed room, is much akin to a Greek forum. Everything is stark, except for two garage doors with one serving as a projection screen. Videos, including a cartoon of an ancient Greek god flying through the air on a winged horse, welcome the audience as they come into the space, and again at intermission. It is also used, at times, during the play as a projection to set up different scenes.

Alyiece Moretto-Watkins is set design and scenic artist for Thinking Cap, Stodard created the projection, along with costumes and sound design. Joel De Sousa is lighting designer. Patrick Watkins is musical director. Emma Magner is stage manager. On the script side, Mitch Silverman is resident librarian, and Judith M. Hurst is dramaturg.

We're sure this first time out of the box for "Women In Assembly" will have Thinking Cap pondering what works and what doesn't. However you slice it, it's original, and clever to the core. Best of all, although written eons ago, Thinking Cap has given the ancient Greeks relevance in today's Weinsteinian and Trumptopian universe.