GableStage's 'The Year of Magical Thinking' Demands Attention And Deserves It 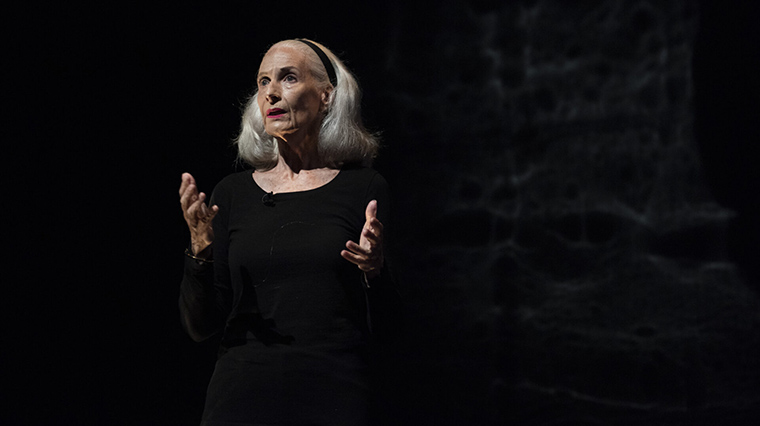 In Joan Didionâs "The Year of Magical Thinking," the one-person show now at GableStage at the Biltmore Hotel, the character's life may seem unrelatable to the everyday audience. The author of what was first a memoir and then a play talks about what seems like a charmed life.

She name drops about celebrities teaching her daughter to swim in the pool at the home of she and her husband, writer John Gregory Dunne in Malibu. She talks about the Manhattan apartment where the couple lives, where night after night they volley back and forth on what to have for dinner.

Sara Morsey has played the role before in the Florida Repertory Production a decade ago, but the GableStage production is wholly different. (Photo by Niall McGinty, Felix Photography)

But soon enough, there's a realization that with all the fame and fortune, nothing could prepare Didion for her own personal Greek tragedy. First, her daughter, a woman just married and in her late 30s, becomes seriously ill. She is hospitalized, in and out of ICUs, in induced comas. The couple never knows from one day to the next if she would even survive.

There is a foreshadowing of the universal theme in "The Year of Magical Thinking." She delivers this line: "This happened on Dec. 30, 2003. That may seem a while ago but it wonât when it happens to you. And it will happen to you."

"The happening" was she and John returning to the Manhattan apartment after visiting their ill daughter, Quintana Roo, in the hospital. She says they began the usual banter about what to have for dinner. When she turned to her husband, she saw he was slumped over. She confides to the audience that she first thought he was playing a bad joke on her. 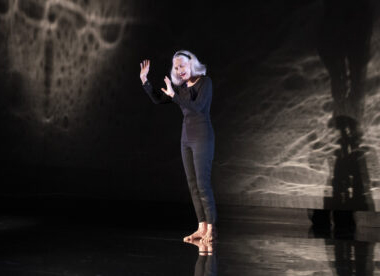 GableStage's production of "The Year of Magical Thinking" takes audiences on the character's journey from the play written by Joan Didion. (Photo by Magnus Stark)

Didion, who died in December of 2021, was a brilliant writer. It shows in the words in "Magical Thinking." Listen carefully. She chooses each with purpose.

She's journalistic in her exactitude. She explains statistics and facts. For instance, she paints a picture of what the apartment looked like when she returned after John had been whisked to the emergency room. There was a dark liquid (which she realized was blood) still on the floor, leftover remnants from the EKG and medicines induced to help revive John, which didnât work.

If you focus on the words as well as what is happening on stage, there's an immersion that happens. It is what good theater is. A slice of life. Going into someone else's world and, as you sit in the darkened space, relate it to your own experience.

But just as Didion likes to present facts. There are facts here to confront as well.

This is not an "easy" show. One woman telling her story, some of it in the past tense for 100 minutes with no traditional theater set. Pulling this off is a Herculean feat on every level. GableStage artistic director Bari Newport, her first season since the death of Joe Adler, directs âThe Year of Magical Thinking.â Here is a bit of a backstory: What was supposed to have been a staged reading became a full-blown production because of the pandemic. 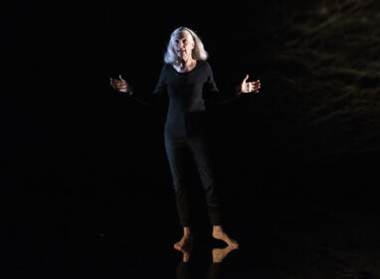 It was put in place when Janece Shaffer and Kristian Bushâs musical âMe Before Youâ was postponed until next season. That undertaking would have been too much for the theater just coming out of a pandemic pause. The timing wasnât right. So it's been bumped to next season.

So, Newport imagined the solo show "The Year of Magical Thinking" as a theater piece in the true sense of the word. With the help of a stellar team, the surroundings create a subtext that gives what could be, in lesser hands, for lack of a better word "tedious."

Sara Morsey plays Didion, but itâs not really âplayingâ Didion as much as it is one womanâs story. It doesnât matter if you know the authorâs work or not. Morsey, who played the part previously at a theater in Fort Myers, doesnât try to capture a character but presents the words as if it is she who is telling this story of how one navigates through unspeakable grief.

Didion obviously did it by putting words on a page.

It helps that Morsey is such a strong presence who can deliver the words and the character. But then, Newport adds the elements. Thereâs the mirrored floor and the back scrim that displays numbers a la chapters and selects words from the text... short phrases that introduce the chapters and that elicit a feeling.

Morsey is in bare feet, partially for effect, partially out of necessity, as the mirrored stage is made of a special material that is easily scuffed. (Newport explains that after the production in a Sunday talk back.) But the bare feet also make the character appear vulnerable and fragile, which, when you hear the story you will know why.

Her costume by Camilla Haith is simple, black tights and a black top, which blend into the very darkness of the stage and the backdrop. Itâs another way of letting the words be front and center.

Frank J. Oliva's abstract projections that appear and disappear, and sometimes reflect like fractals off the actress add to the sense of disarray that Didion is dealing with as her life crumbles in a second. Tony Galaska's lighting creates different hues, gold, gray, and sometimes the character in a spotlight, which sets the mood and all inserting itself into the production as yet another piece of the puzzle. 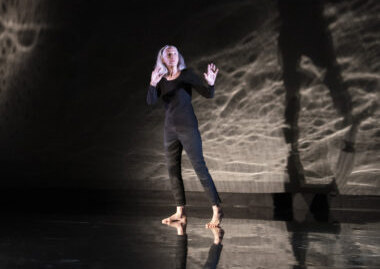 There are no sets for the solo show, but projection's by Frank J. Oliva and lighting by Tony Galaska create a mood in GableStage's production of "The Year of Magical Thinking." (Photo by Magnus Stark)

There is nothing on the stage; Morsey never sits. The blocking has her using different parts of the stage, but there is only one prop that appears. It is a book that she takes from a hidden nook on stage left and eventually returns it to an identical nook on stage right.

Music and sound by Matt Corey is present in nearly 95 percent of the 100, but it seamlessly mixes in the mood to complement the action.

This is a production that captures attention, demands it almost. It's thought-provoking, and inventive with every ounce of talent projected onto the stage from Morsey to Newport to the complete production team. 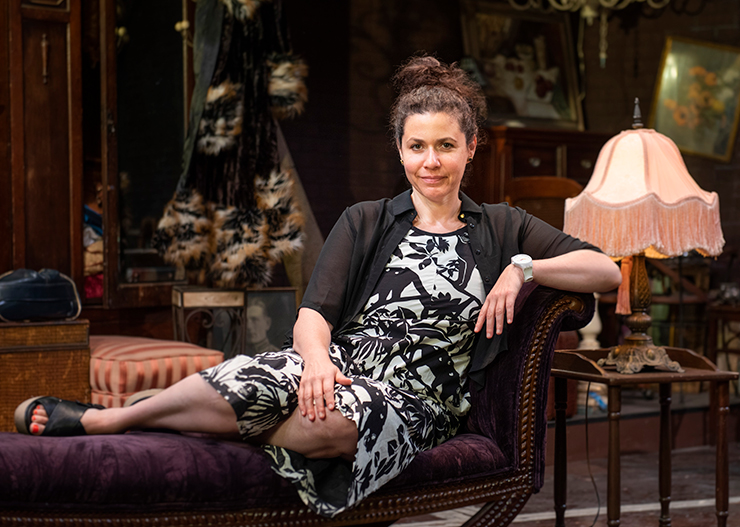