Okay, what do you want to hear first? The bad news, or the strange, somewhat unexpected, equally bad news?

Let's start with the former: âWrath of Man,â the latest dose of testosterone-fueled swagger from Guy Ritchie, is a slick, vacant fizzle, a hodgepodge of stuff done better by other (read: more mature) filmmakers. It's a slipshod, instantly forgettable action thriller where revenge is a dish served with a side of homophobia and a fragmented, needlessly convoluted narrative.

But here's what's unusual about this collaboration between Ritchie, who burst into the international movie scene with âLock, Stock and Two Smoking Barrelsâ back in the late 1990s, and that film's most high-profile cast member, Jason Statham: it's dead serious. Think âDeath Wishâ with a twisty makeover.

Oh, sure, you know Ritchie. He never met an off-color joke he didn't like, especially involving male genitalia, and as the film begins, the emasculating putdowns, often with the suggestion of sexual contact between men hurled as a mighty insult, are tossed early and often. In one case, they're an offense punishable by gunfire. Coming after Ritchie's âThe Gentlemen,â that unsavory A-lister ensemble piece featuring Hugh Grant as a lecherous swindler with the hots for Charlie Hunnam, this is par for the course and, sadly, to be expected.

What's different this time is a stony self-seriousness. In telling the story of Patrick Hill (Statham), a newly hired driver for a Los Angeles cash truck company whose strikingly adept handling of violent situations sets off all kinds of red flags to his co-workers and superiors, Ritchie has opted to stamp out the cheeky humor and verbose asides. On paper, this feels like progress: a challenge the director of âSnatchâ has set for himself to refrain from resting on his comfort-zone trappings and instead lean into the genre's core elements, with occasionally kinetic results. Think of Quentin Tarantino going easy on his trademark ornate dialogue when he made âKill Bill,â especially âVol. 1,â and you get the idea.

âWrath of Man,â a remake of the 2004 French film âLe Convoyeur,â also echoes Tarantino in its nonlinear four-act structure, but that's where the more overt similarities end. A man of few words and a hidden agenda at the center, widescreen compositions filled with steely grays, and elaborate shootouts that aim to place viewers in the middle of the chaos. Hmmm. Can you say Michael Mann? I'm told by Ritchie aficionados that his latest effort resembles âRevolver,â his 2005 British-French co-production mixing European and U.S. stars, also headlined by Statham and also driven by revenge. And yet, it's pretty clear to anyone who's seen Mann's âHeatâ that Ritchie is aiming a little higher this time.

Which makes the lackluster results all the more lamentable. It would have pleased me to report that Statham and âWrath'sâ sizable supporting cast were able to somehow elevate the material, but Statham's a sullen cypher here, and the other players range from insufferable (Josh Hartnett) to fitfully amusing (prolific character actor Eddie Marsan, trying an American accent on for size).

In imbuing the gravity that he clearly felt this tale of retaliation with a high body count merited, Ritchie has leeched the film from anything resembling a distinctive personality while retaining some of his prehistoric hang-ups that are well past their expiration date and, let's be real, a little startling that they got a pass from a major studio in 2021. In short, it's the worst of both worlds: a crime caper weighed down by an overwrought story with too many characters that barely leave an impression, while also largely devoid of the spunky verve that even detractors like yours truly concede is something that Ritchie has handled with considerable flair in the past, most notably in his Robert Downey Jr./Jude Law-headlined âSherlock Holmesâ from 2009.

If I'm being coy about story details, that's because âWrath of Manâ gradually peels back its onion layers after Ritchie introduces Hill, nicknamed âHâ by his trainer Bullet (Holt McCallany), and his cash truck colleagues. The director also throws PTSD drama and post-military service disillusionment into the mix. The bottom line is that a film that ought to have been character-driven, considering the baggage and past trauma on display, is sucked into a black hole of underworld rivalries and score-settling.

Driving home the lead character's laser-like focus on getting even is Christopher Benstead's repetitive drone of a music score. It fixates on five chords in a way that sounds like a lugubrious riff on John Williams' âClose Encountersâ theme. Ritchie drills those notes into us as if he were jabbing our foreheads with his index finger.

For all its stumbles, âWrath of Manâ does serve up a climactic setpiece that is capably conceived and staged, fueled by a trigger-happy abandon that deprives most characters from immunity. But all the skillful gunplay and perspective-shifting curlicues in the world are all for naught if they're hoisted onto a crumbling foundation. Much like the violence it depicts, the film spirals into chaos, on both sides of the camera, then reels it all in for the most mundane conclusion imaginable. 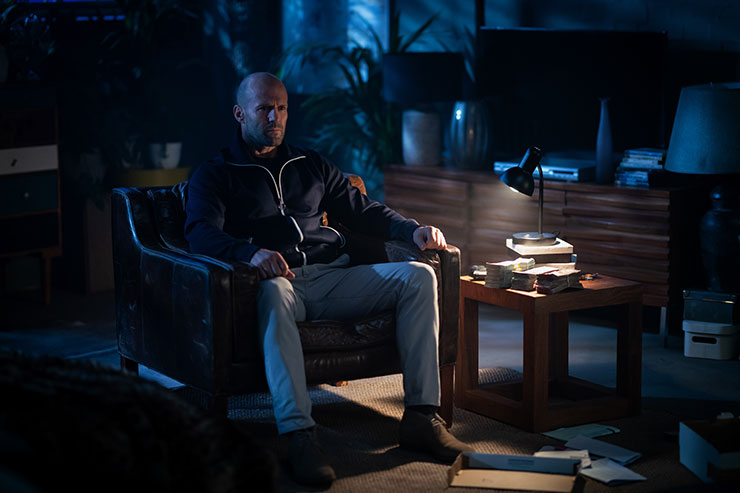 âBoredom is more dangerous than bullets,â one character muses. For the former Mr. Madonna, that's a line that he ought to take to heart. His worldview has curdled into gritty vapidity, and by the time the last bullet casing has hit the ground, he only has himself to blame.

âWrath of Manâ is now showing in theaters across South Florida, including IMAX and Dolby Cinema engagements at AMC Aventura and AMC Sunset Place. The AutoNation IMAX at the Museum of Discovery and Science in downtown Fort Lauderdale is also showing it this weekend.