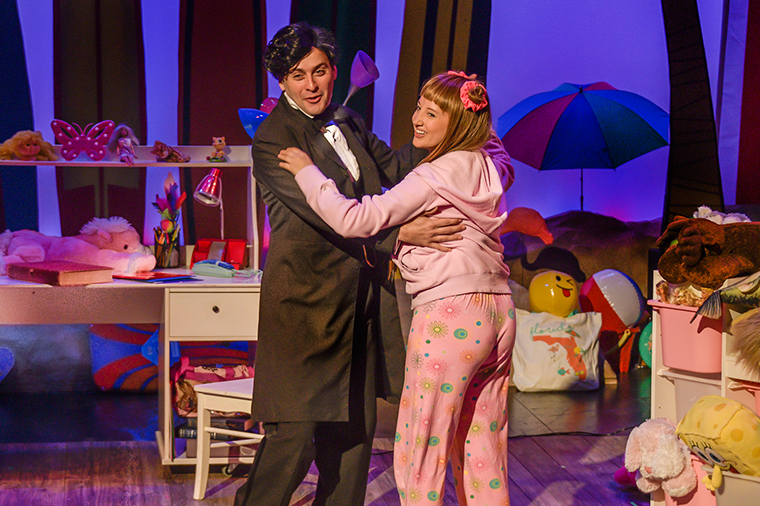 Hey, it's hard, catching the mercury of a short play. Miami's City Theatre has been trying for over twenty years and that they're still here is a testament to their success. There've been lean years and swell. But, hoo hah, this year's offering is on the swell side.

Artistic Director Margaret Ledford and her cohorts opted for the serious: climate change, me too, how's my life, etc but not too far on the dark side, leavening the drama with music and laughter. A good trick and they pulled it off, mostly.

Opening with the musical "Dragon Slayer the Untold Story of America's Debatably Least Effective President", Hannah Richter as high schooler Jennifer complained about getting Franklin Pierce as her project subject. Brian Rieff as Pierce defended himself with great elan. A fun piece, good music, well performed. Directed by Michael Yawney. Book and lyrics by Preston Max Allen and music by Will Buck.

"Frozen Foods" up next with the almost unrecognizable Lindsey Corey blowing up the stage over four for a dollar meal packs. Daryl Patrice as the sanity. Also directed by Michael Yawney and also great fun. No music, though. Written by Ian August.

Number three in the first act brought the best show of the night: "The Forgotten Place" by Jeff Locker. Eric (Jovon Jacobs) interviewed Kip (Brian Reiff) for the job as his best friend. Let's do the hyperbole with hilarious, tragic, and life as she is. Well written, directed and most importantly, well acted. Directed by Gladys Ramirez. Rah, rah.

Steve Yockey's "Telephones and Bad Weather" buttoned the first act with its take on climate change with Gregg Weiner talking to God via old fashioned wired phone. God calls him. (How's that for vip standing?) urging him to build an ark. Lindsey Corey is his, (Gregg's, not God's) wife, who knows her husband and light bulbs never mix. Hannah Richter is a nosy neighbor and interns Katherine Berger, Theresa Callison, Natalia Quintero-Riestra and Zye Reid play the Disciples, a Pacific Island Greek Chorus. More fun stuff, but marred with a weak ending. Andy Quiroga directed.

Act Two opened with a gasp from me: "Heavens to Betsy, what were they thinking?"

Jen Diamond's "This is How Ghosts Speak" has Gregg Weiner, Hannah Richter and Daryl Patrice in a theatre basement with no electricity. So Gregg tells a story about a long dead maintenance man who haunted the joint. Daryl has hysterics because she's the theatre manager who's about the open a show, and Hannah does ghostly things. Like Boo. All this lit only by three flashlights. Not enough tension? Let's turn the flashlights off, so now the City Theatre stage is completely black. No lights, nada. For at least half the show we are listening to Talk Radio from Ghost Land. The only serious world problem this piece addresses is the plenitude of the underly imaginative. Directed by Margaret M. Ledford.

Back to somewhat sanity with Lia Romeo's "The Presentation" in which Lindsey Corey teaches a horde of Vikings (take a bow costumer Ellis Tillman) the evils of being nasty to women. She's at a lectern and they're drooling in anticipation, the air thick with kills, rapes, and oh no you mustn'ts. Gregg Weiner, Zye Reid, Jovon Jacobs and Brian Reiff are the weapon waving hairy lusters. Entertainingly obvious. Directed by Margaret M. Ledford. 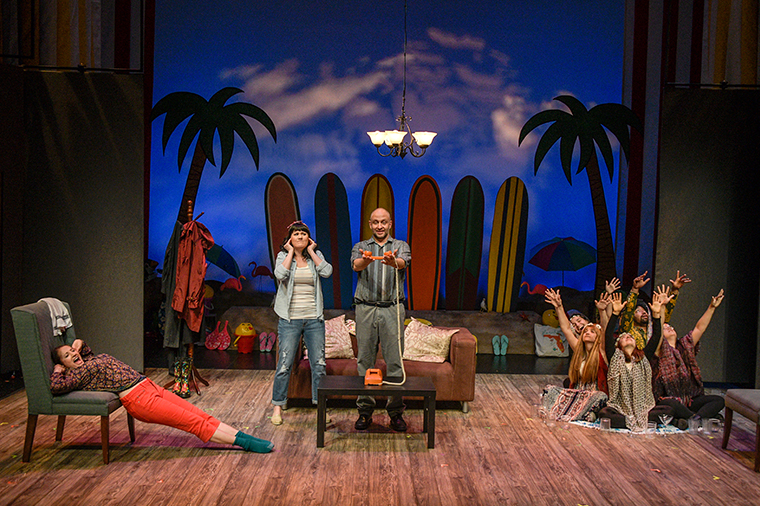 And then, thank Heaven, art returns with "Schrodinger's Gun". (Oh, Google it, please) An intense piece by Greg A. Smith. Jovon Jacobs and Brian Reiff are a couple of cops, Jacob the trainer and Reiff the trainee. There are guns and attache cases. Full or empty? Make the right choice or it's flunkola time. Jacobs and Reiff work exceptionally well together and their performances and the writing put this piece right up there with their previous "The Forgotten Place". Daryl Patrice also appears. Directed by Gladys Ramirez.

So now we're coming to the big finish and whew, City Theatre is back up to its first act standard.

Gregg Weiner finally gets a role worthy of his talent...as Elsie the Cow. He's a singing, dancing, udder flapping, has been, lamenting his past glories, now exemplified by Lindsey Corey as his younger self. She, ahem, has perky what nots. And once again, she disappears into her role. Good trick when you're playing a cow. The whole gang's on stage for this finale, bovine chorus line, raging bull, and most of all Weiner, at his very best. The lipstick is a killer. Book and lyrics by Hillary Rollins. Music by Bill Johnson. Directed by Margaret M. Ledford with musical direction by Caryl Fantel. Choreography by Sandra Portal-Andreu.

The show is "Big Fat Cow". It goes a long way to making this season one of "Summer Shorts" best.

"Summer Shorts" plays through June 23 in the Carnival Studio Theater at the Arsht Center.