"John Wick: Chapter 3Â â Parabellum" is a symphony of breaking bones, spurting arteries and shattering teeth. It's an elaborately choreographed ballet where pirouettes and pliÃ©s are replaced by karate chops, slicing swords and the kind of firepower that disintegrates its targets from the waist up. It throws everything it can think of at the screen to see what sticks. Most of it does, in spectacular fashion. Its predecessors, solid as they are, feel like warm-up acts by comparison.

But what ultimately sets director Chad Stahelski's floridly entertaining shoot-em-up apart from others of its ilk, action movies that unfold with the rat-tat-tat logic of a video game, is its temperament. This is not a butt-numbing wallow in carnage where everything is staged with such oppressive homogeneity that your mind ends up tuning out along with your goodwill. Its virtues go beyond lively staging, beyond endlessly inventive clashes shot and chopped with an eye for spatial continuity. Take, for instance, a knife fight that follows the titular hit man, played by Keanu Reeves, as he takes on a very talented duo. When his foes drop him to the ground, and you think the end is near for our intrepid hero, the other men just help him get up so they can continue fighting. Talk about camaraderie among mortal enemies! 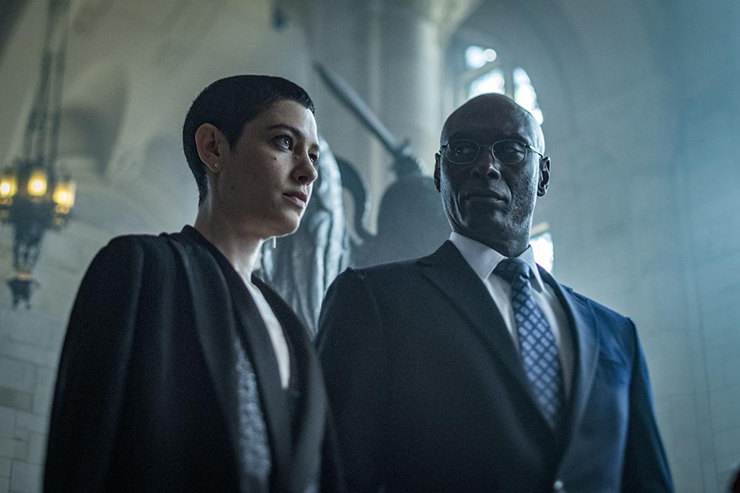 Make no mistake: This is still an ultraviolent foray into the kind of underworld that exists in graphic novels and first-person shooter games. But unlike your standard sequel, the kind that settles for Xeroxing what the original entry special, sometimes beat by beat, "Parabellum" improves upon and expands its already intricate universe of assassins and kingpins. It provides more details about its avenging angel's past. It also knows when to give viewers breathing spaces throughout its otherwise relentless thrill-ride approach to world-building. It's a film of slick, neon-lit surfaces, of treacherous back alleys with precious few places to hide. It takes you inside a hermetic society bound by blood oaths and strict codes of behavior. (Stahelski does assume you've seen the first two films, but newbies who go in blind won't find themselves that lost. Still, it's not something I would recommend.)

What kicks the plot of "Chapter 3" into gear is actually a violation of this rigid set of rules. At the end of "Chapter 2," Wick chooses to spill blood inside The Continental, the fictional New York City hotel regarded as a neutral ground where guests of ill and dangerous repute are forbidden from engaging in "work." It's Switzerland for professional killers. The new film picks up where its predecessor left off, with Wick, all bruised and sweaty and uncharacteristically disheveled, stumbling down the streets of the Big Apple, his trusty pit bull by his side, with a $14 million bounty on his head and less than an hour to escape or find shelter. 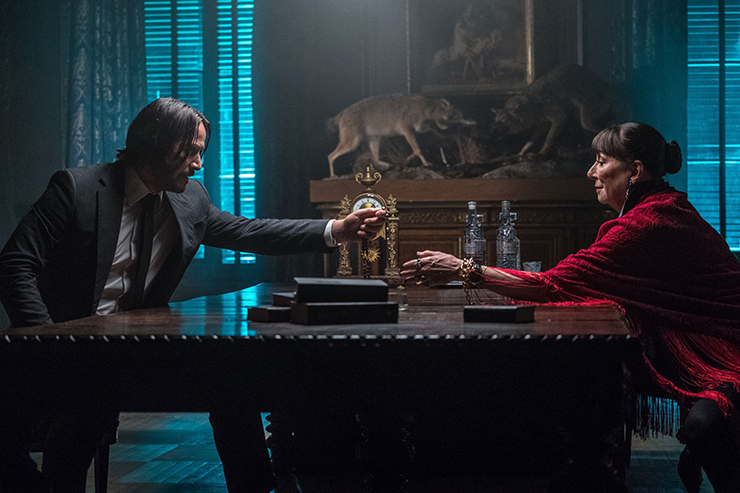 A quick stop in the New York Public Library leads to a mano-a-mano where the U.S. Marine-turned-hired gun uses an old book as a lethal weapon. (Beware dusty hardcovers!) The movie appears to plateau early shortly after, when Wick fends off goons on motorcycles while on horseback. Meanwhile, The Adjudicator ("Orange Is the New Black's" Asia Kate Dillon), a no-nonsense underworld adjuster of sorts, visits those who may helped Wick escape and ensures that they pay for their transgressions in all kids of visceral ways.

But Stahelski, aided by cinematographer Dan Laustsen, editor Evan Schiff and an army of stunt performers, makes it clear this is just the opening salvo. The hyperkinetic adventure that follows indulges in the right kind of excess. With the help from a handful of reluctantly helpful figures from his past, Wick embarks on a globe-trotting odyssey punctuated by obsessively crafted chases, melees, tussles, brawls and desperate cajoling. It delivers a balls-to-the-wall extravaganza that bridges the gap between the Jerry Bruckheimer crowd and cinephiles with a yen for action cinema. Stahelski, who collaborated on the first "John Wick" with "Atomic Blonde" helmer David Leitch before they went their separate ways, has crafted a corker of a thriller that aims to please multiplex audiences while still dropping some hard-to-miss nods to Buster Keaton and Andrei Tarkovsky. Think of the Tokyo section of "Kill Bill: Vol. 1" stretched to feature length, and you get the idea. It really is that strong. 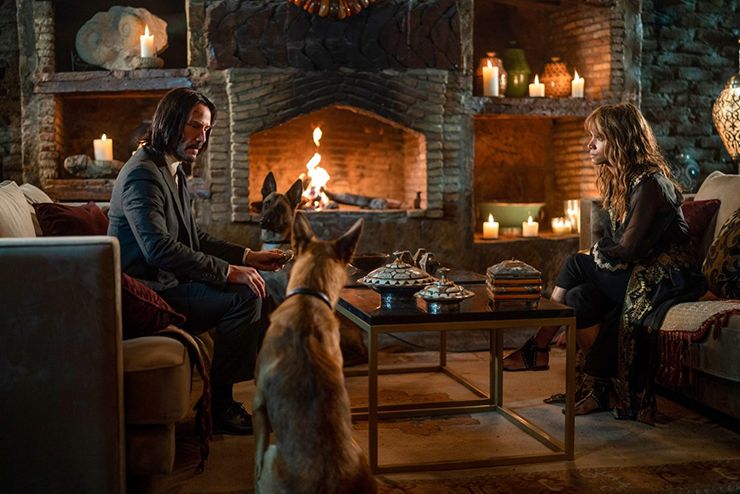 And despite the brutality of the bloodshed, "Parabellum," a Latin word that means "prepare for war," doesn't have a mean bone in its body, or in this case, bodies. Lots and lots of bodies. Colleagues of mine have already deconstructed the action sequences in more minute detail than I have, and more power to them, but what stands out to me even more is Stahelski's generosity of spirit, a sense that this cast made up of A-listers (including Halle Berry, Laurence Fishburne, Anjelica Huston and Ian McShane) and B-movie stalwarts like the charismatic Mark Dacascos are all playing with Reeves in this jumbo-sized sandbox. Their onscreen rapport offsets the panoply of eye-gouging, limb cracking and splashes of digital blood (used well, for once) that Stahelski serves up with bracing consistency.

And just when you think there's no way the filmmaker can top himself off any further, he unleashes a tense climax to tie things up with cathartic panache and a few narrative surprises that whet viewers' appetite for "Chapter 4." Despite the film's awe-inducing logistics, the movie never lets viewers forget that Wick's journey was started as a response to grief, a righteous quest spurred on by the loss of his wife and the puppy that was her last gift to him. In other words, what could have easily been a franchise that focused on highlighting its star's physical prowess and death-defying skills (I'm looking in the direction of Christopher McQuarrie's "Mission: Impossible" films) ends up being something considerably more egalitarian. That certainly applies to the way "Chapter 3's" headstrong women approximate gender parity in what's often considered a male-centric genre. Reeves, who at 54 is aging like fine wine, doesn't make it all about him, and that makes all the difference here. 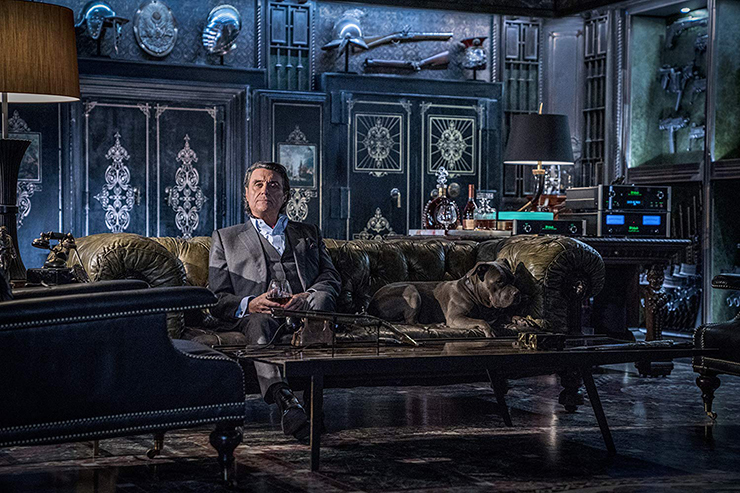 So, what are you waiting for, action junkies encompassing multiple generations and sensibilities? "Parabellum" is the gift that keeps on giving, the cinematic equivalent of an extravagant banquet where the chef doesn't let up until you're satisfied (and stuffed). The best movie the genre has seen since "Mad Max: Fury Road" is waiting to give you that unfiltered high that you crave. Is it too much of a good thing? At times, yes, but why would you want restraint from such a wild ride? In this case, too much is enough. More than enough.

"John Wick: Chapter 3Â â Parabellum" kicks and punches its way into theaters May 17 in wide release. Seek it out in IMAX, Dolby Cinema and other large format screens to get the full Keanu.