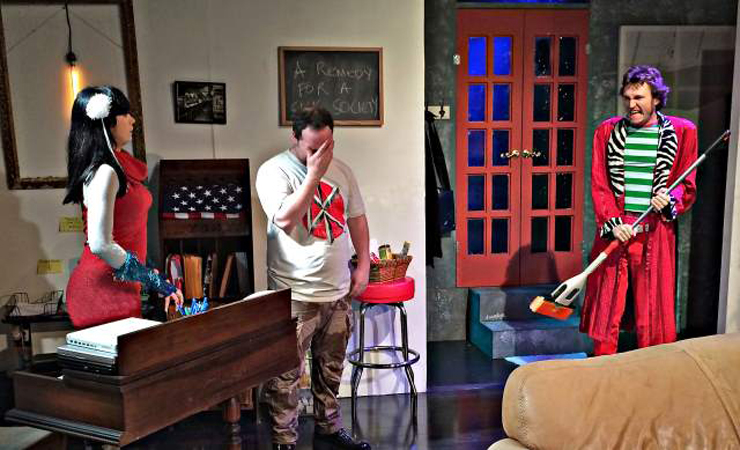 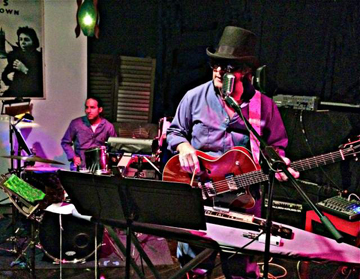 Hit or miss, Paul Tei's Mad Cat Theater Company does not play by the rules. To provoke, to be different is a theme apparent in every show and in Neil Simon's Star-Spangled Girl, currently playing at MTC's SandBox, they've taken a minor piece by the master and "re-examined" and "deconstructed" it, shifting it from 1966 to 2066. The Simon jokes remain, untouched.

Andy (Theo Reyna) and Norman (Noah Levine) are struggling and starving in San Francisco. Andy publishes and Norman writes for their magazine, the anti-government Fallout. Sophie (Jessica Farr) moves in to their apartment house and behold, the crazed Norman becomes obsessed with her, sniff, sniff, what a wonderful smell. Norman's pursuit gets Sophia fired and Andy convinces her to work for the magazine, thus getting Norman back to writing rather than stalking. Eventually, however, and despite their political differences, she falls for the slightly more normal Andy.

Levine's Norman, in eyeball blistering clothing, a demented stick insect flailing through a failed love affair, Reya's Andy, the straight man worrier and Farr's Sophie, the All-American girl who might just be an android, work well together. The fight between the two men is an hilarious highlight and Farr's sense of humor shines through her robotic speech and movement.

Director Tei has added music and narration to the piece. Stephen G. Anthony, Slash reincarnate, plays guitar, steel guitar and bass. He also sings and narrates. Brian Sayre is the drummer, and the two back up the actors, who each have a brief song. Anthony and Sayre also provide the many rim shots.

It's a three act evening, a lot of laughter, not too much political posturing, and with a faint sense of straining to be different.