Rags at the Plaza Theatre 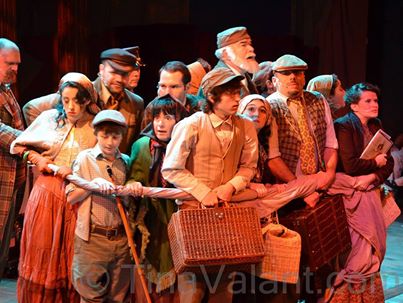 That it ran for only four performances after it opened on Broadway in 1986 might suggest there is a little something amiss with Rags, the musical by Joseph Stein (book), Stephen Schwartz (lyrics) and Charles Strouse (music). The show has been reworked a couple of times since and now, in another adaptation and with additional musical arrangements, Rags is on stage at Alan Jacobsonâs Plaza Theater. Unfortunately something is still amiss.

If you want to hear, once again, every clichÃ© ever written about every Jewish immigrant in New York, then this is the show for you. And to be fair, a lot of people obviously do, as the house was packed.

Not to give away the plot, but watch out for the landing at Ellis Island, the father and daughter tizzies, the mother and son without papers, the genial bachelor, the slimy husband, the union leader, the Tammany mob, the little tykes, the slave drivers in the sweat shops, the starvation wages and the hope that shines through it all. And oh, goodness me, even the The Triangle Shirt Fire.

So I didnât like the book. How about the music? Hard to tell as the singers seemed to be at odds with the live music and each other. No sense of cohesion, no melding into the spirit of the show. The songs? Workman like, but you could string me by the heels over a pit of vipers and I still wouldnât say I heard anything close to memorable.

Fifteen actors make up the cast including several children and thereâs much role doubling with chops ranging from amateurish through community. But watch this kid, heâs going to be a star, and Iâm talking about Michael Westrich. As Ben, the bachelor, his acting, singing and moves channel a young Gene Kelly. Charm is the word. Itâs a different Rags when Westrich is on stage. A nod also to James Cichewicz as Saul the union organizer, Gail Byer as Rachel the widow and Abigail Perkins as Rosa and Sophie. Melissa Boher Jacobsonâs wide experience as a singer adds much to her performance as Rebecca, the showâs lead.

Michael McClain designed the wooden scaffolding set with a backdrop of multi colored rags, and be warned, the whole is bathed in a too dim dappled orange glow.

Rags is playing through March 16 at the Plaza Theater, 262 South Ocean Boulevard, Manalapan.