Egos Run Amok in Front Of and Behind Camera in 'Birdman' 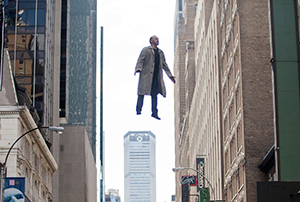 In the blink of an eye it's gone, but the word is hard to overlook. Amor flashes on screen during the retro beatnik-scat cat opening credits of Birdman or (The Unexpected Virtue of Ignorance), but love is in short supply in the fifth feature by Mexican auteur Alejandro GonzÃ¡lez IÃ±Ã¡rritu (21 Grams, Babel). Or empathy. Or modesty. Or restraint. Or subtlety. Or generosity or spirit.

IÃ±Ã¡rritu's first comedy is a corrosive portrait of unchecked artistic ambition, a Broadway-set showbiz satire that not only sets its sights on the entertainment industry's most deplorable Darwinian impulses, but also places the audiences genuinely captivated by pop culture â and reviewers who analyze these works for a living â in its crosshairs. It proclaims its contempt for Hollywood's dream factory â and the oversaturated superhero genre in particular â without even considering that quite a few of these films could, and have been, as relevant as snide takedowns of such mainstream fare.

The curtain rises on Riggan Thompson, a struggling A-lister who catapulted to household-name status after he breathed life into the titular costumed crimefighter over the course of three wildly successful box office juggernauts. But Riggan, played by Michael Keaton in a fully committed comeback bid, turned his back on his meal ticket, declining to star in a fourth Birdman, which led to a career slump from which he is trying to recover. The solution: the theat-uh! Specifically, a stage adaptation of Raymond Carver's short story âWhat We Talk About When We Talk About Loveâ that he's written, directed and is headlining alongside his offstage girlfriend Laura (Andrea Riseborough) and esteemed thespian Lesley (Naomi Watts).

When a falling stage light takes the overacting fourth cast member out of commission on the eve of the play's first preview, it's up to Riggan and his producer/attorney Jake (Zach Galifianakis) to find a last-minute replacement, resulting in a tee-hee-we're-so-droll scene in which they go through actors' names only to realize â wait for it â they're unavailable because they're currently playing superheroes. Lesley is able to talk her boyfriend, notoriously difficult prima donna Mike Shiner (Edward Norton), into agreeing to step in, leading to hamfisted head-butting between Riggan and his new co-star, all while the older actor's daughter Sam (Emma Stone), a recovering addict hired by her dad to be his assistant, looks on with jaded bemusement.

GonzÃ¡lez IÃ±Ã¡rritu and his screenwriting team must have loved the fact they were able to nab Keaton, who played Bruce Wayne/Batman in Tim Burton's Caped Crusader forays Batman and Batman Returns, as their leading man. They nevertheless proceed to stamp out any connection between the actor and his iconic role, flattening any potential spark this nifty art-imitating-life-imitating-art conundrum would have had on their material. The sole overt vestige of Birdman in Birdman, in addition to some eleventh-hour CGI-driven flourishes I won't spoil here, is the character's voice, a disembodied id berating Riggan for this quixotic endeavor crumbling before his eyes. The raspy baritone sounds suspiciously like Keaton's own Dark Knight, but it fails to imbue Riggan with an engaging inner life that would have made a solid counterpoint to the discombobulated mise en scene. 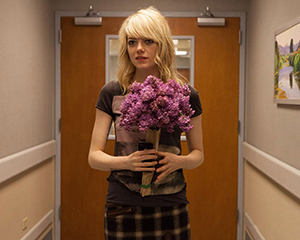 Speaking of aesthetics, Birdman is shot to resemble a single uninterrupted take, a daunting undertaking capably executed by cinematographer Emmanuel Lubezki, even if the Steadicammed-into-submission camerawork results in the Oscar winner's ugliest-looking movie to date. (Actually, scratch that. Birdman is ugly inside out.) Instead of making the movie unfold as if it were just happening, it makes this magic-realism-speckled heightened reality all the more false. Instead of liberating the (facile, thinly conceived) text, the constantly roving camerawork stifles any creativity.

This critic acknowledges Birdman's tunnel vision has yielded an echo chamber of praise, including an extended standing ovation at the film's New York Film Festival screening. This critic further admits to loving GonzÃ¡lez IÃ±Ã¡rritu's Amores Perros, liking 21 Grams and Babel with some reservations, and being thoroughly turned off by Biutiful's oppressive calamity porn. So it's safe to say I went into his latest effort with significant trepidations, but while I did, indeed, hate Birdman in all kinds of expected ways, as stated above, I also despised it in ways that completely took me by surprise, and yes, this goes beyond the crashing cymbals in Antonio Sanchez's earache-inducing score.

Birdman continues the self-referential tradition of introspective auteurist cinema epitomized in films like All That Jazz and, especially, 8Â½. In fact, halfway through the screening I attended, I scribbled âFellini's Black Swanâ in my notes, and while the notion is intriguing, what's astonishing about GonzÃ¡lez IÃ±Ã¡rritu's film is how one-dimensional its females roles are. Laura, Lesley, Sam and Riggan's ex-wife Sylvia (Amy Ryan) are so narrowly defined that they wind up serving little purpose beyond being signposts in Riggan's life. One gets the sense the characters, well performed as they are, vanish into thin air the second they're out of Lubezki's vantage point. (In order to dig into what I found objectionable from this point on, I will have to go into some mild SPOILERS, so if you plan to see this crass misfire, skip the next paragraph and come back after you've been subjected to its bombastic brand of satire.)

The filmmakers' icky gender politics reach a nadir during a borderline-offensive, jaw-droppingly inane scene in which Method junkie Mike, required to simulate sex on stage, asks a horrified Lesley to drop all pretense and copulate for real, to which she firmly objects. GonzÃ¡lez IÃ±Ã¡rritu is aiming for laughs during this uneasy exchange, even going so far as having Norton sport a (cartoonishly oversized) boner, but the reaction it engendered in me was utter repulsion. The more I think about it, the angrier I become at Birdman's caustic, inelegant dick-swinging, literal and figurative alike. The heavy-handed meta-commentary and incident-laden shenanigans even find time to introduce yet another broadly conceived woman: Tabitha (Lindsay Duncan), a powerful New York Times theater critic who, during a scene with Norton's character, initially comes across as an oasis in this desert of self-importance, but once she clashes with Keaton, is reduced to a shrew from Shrewsville. Bitter, dismissive and irrevocably biased toward Riggan's movie-career baggage, she's a stand-in for all critics who dare to take issue with GonzÃ¡lez IÃ±Ã¡rritu's vision.

Birdman aspires to celebrate the chaos of creative pursuit, the glory of regaining your mojo after it's gone astray. It reaches for the stars, goes for broke, pulls out all the stops â¦ and instead of shedding light into the ashes of a once-promising career, builds a shrine to the idiosyncratic âgeniusâ of Alejandro GonzÃ¡lez IÃ±Ã¡rritu. It's a smug, feature-length temper tantrum so in amor with itself it can't be bothered to get its head out of its own ass.