The Universal Pictures release, which is opening in the cinematic no-man's-land that is January at your local multiplex, shamelessly serves its purpose â and does so with tongue placed firmly in cheek â as the fluffer for the studio's high-profile adaptation of 50 Shades of Grey, which is coming out just in time for Valentine's Day. 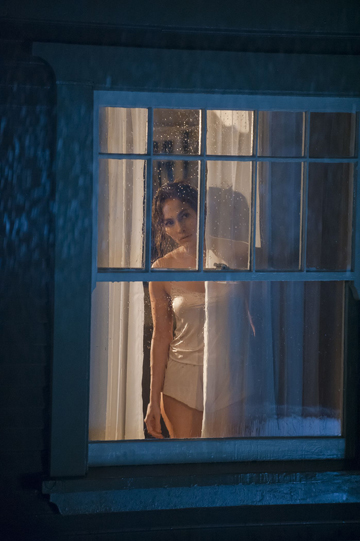 But relationship bliss is virtually absent for Claire Peterson, the high school literature teacher played by that most intellectual of movie bookworms, Jennifer Lopez. Claire, you see, was a good wife to her computer software engineer hubby Garrett (John Corbett, aging like fine wine), at least until he chose to cheat on her by banging a work colleague. Director Rob Cohen shows the meltdown in cheesy flashbacks set to composers Nathan Barr and Randy Edelman's ominous chords, but he doesn't linger on the aftermath. Credit Cohen and screenwriter Barbara Curry for the movie's let's-get-on-with-it momentum.

Garrett's been shunned from the Petersons' suburban Shangri-La, limited to visits to spend time with the couple's nebbishy teenage son Kevin (Ian Nelson). The adulterous hunk, however, refuses to give up on their marriage, and a conflicted Claire is beginning to show signs she may be willing to give them another chance before signing those divorce papers. It is in this ambivalent state of mind that Claire and Kevin meet Noah Sandborn (Ryan Guzman of the Step Up series' fame). Actually, our first glimpse of the titular character is not of his face but his bicep, as the strapping stud helps mother and son with a faulty garage door.

Claire is taken aback by her gregarious new neighbor, who has moved in with his frail uncle after his parents were killed in a terrible car crash. Curry takes pains to establish that this twentysomething adolescent shares Claire' love of the classics, Homer's "The Illiad" in particular, but she knows what she's making here, and it ain't Shakespeare. But wait, you might say, how's the sexytime action between this shapely MILF and her boy toy? Indulge me for one minute, dear reader, and let me refer you to the sequence that precedes Boy Next Door's hanky panky. Claire's friend Vicky (comic relief Kristin Chenoweth), the vice principal at her school, has fixed up Jenny from the Block on a blind date with a self-satisfied businessman, and the scene â mortifying, ruthless, cartoonish â shows the filmmakers putting a specific demographic in their crosshairs you rarely see in this position in mainstream U.S. cinema: moneyed, predominantly Republican Wall Street sharks with nothing but condescension and disdain for women. Claire and her date butt heads over the role literature should play in a high-schooler's education, and her putdown is actually kind of priceless.

Then she goes home, accepts Noah's invitation to come over on a stormy night, and lets herself go as the attractive sociopath gets to work down below. The sex scene is a tad on the tasteful side, and as such slightly at odds with the trashiness coursing through the rest of the film â think Zalman King remaking Fatal Atraction with the genders reversed â but it's certainly racier than this reviewer expected, and like my colleague and fellow critic Juan Barquin noted, it depicts a man performing oral sex on a woman (albeit briefly), a rarity in mainstream cinema.

And this is as far as The Boy Next Door strays from norm. The rest of the film, taut yet predictable, goes through the stalker-thriller genre motions and hits the expected marks. Nevertheless, it fits the mold with gusto and verve, never taking itself too seriously â¦ something that marred Michael Apted's Enough, a similarly-themed Jennifer Lopez vehicle endlessly referenced in some of this new film's more disparaging reviews. Cohen (Dragon: The Bruce Lee Story, The Fast and the Furious) is channeling Joseph Ruben (The Good Son, Sleeping with the Enemy), another filmmaker who's short on subtlety but highly skilled in delivering low-end thrills.

If there's anything dampening the fun in The Boy Next Door, it's the post-coital guilt with which the filmmakers saddle Claire. They make too big a deal of the character's buyer's remorse. Just once, I'd like to see a studio film handle morning-after jitters with joy, not apprehension. Thankfully, the rest of this satisfyingly junky flick knows it's best to just sit back and let the psycho in this psycho yarn chew the scenery and drop his drawers. I kinda dug this movie, and I don't feel the least bit guilty about it. In a season filled with overpraised Oscar bait and genuinely wretched winter releases, such unfettered abandon is worth celebrating.