'Grass Stains' Choreography One Of A Kind

âGrass Stainsâ continues to evolve as it now enters into its second cycle of creativity and production. Launched as an opportunity to provide both financial and mentoring support for site-specific creations in South Florida, the project, in 2018, has chosen 13 artists to participate in the local residency program to be mentored by Los Angeles artist, Stephan Koplowitz. Two of those 13 artists were selected to create site specific works in the Miami area that will be premiered in performances in early and mid-December. 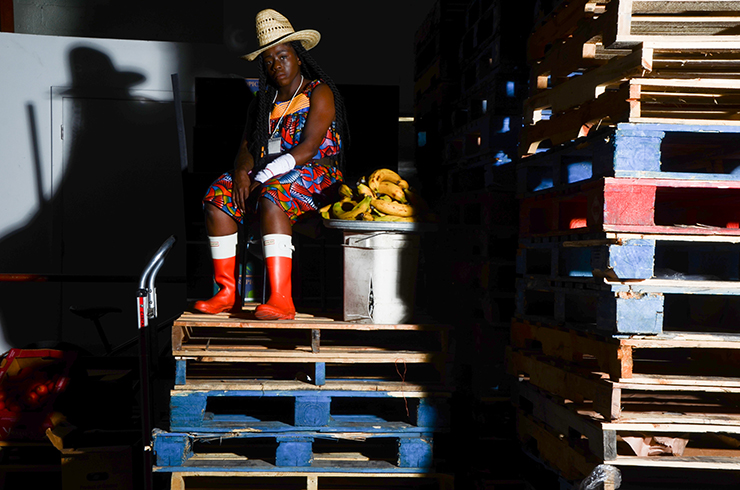 I had the opportunity to speak with founder, Pioneer Winter, as well as Sandra Portal-Andreu and Liony Garcia, the two artists who were chosen in 2018 to create site-specific works.

Winter spoke candidly about the creation of âGrass Stains,â how it came to be, and what makes it unique. He said he noticed many choreographers doing site-specific work, but he knew there was another way that could honor the site and still keep the integrity of the work. Winter also saw that there were choreographers in Miami who wanted to create site-specific work, but didnât know how to do it. He met Koplowitz who is an accomplished choreographer and site-specific artist. Koplowitz was ready for the challenge to create something new and different. Koplowitz brought experience and knowledge, which was truly empowering to the project from the beginning. The idea became a reality. âGrass Stainsâ is the only model of its kind that works in the way a residency does, while providing on-going mentorship and funding.

âThere is a huge amount of planning needed to make each iteration for 'Grass Stains,' " said Winter.Â  "Lining up funding and scheduling and just searching for artists that meet specific criteria. We learn more each year. So next year, we want to spend more time in the environment. Not imposing a concept on a site but allowing the site to determine the concept.â

He continued. âOne of the biggest differences between 2016 and 2018 is the idea to really re-conceptualize a place. So it is a place that may be a little hidden. We want to connect with people where they are rather than trying to get them to a theater. This year, we also wanted to have deliberate inclusivity so that every location is ADA compliant, that weâve already thought about all of the challenges, and we make each performance easily accessible to everyone.â

Sandra Portal-Andreu has been selected to create site-specific work in 2018. Her work, âLuckyâ will be in Hialeah Park.

Portal-Andreu said, âI didnât expect ('Grass Stains') to be as in depth as it was. It was really enriching to work with Stephan so closely. I had two sites in mind. I really wanted my first choice, which was Hialeah Park. I channeled my energy!â

âI was literally born down the street,â she continued. âMy ballet studio was close, and we used to take our dance photos at the park. I went to QuinceaÃ±eras there, and my family celebrated New Yearâs there. I just have so many memories from that park. Iâve never seen a horse race there! It was always social occasions.â 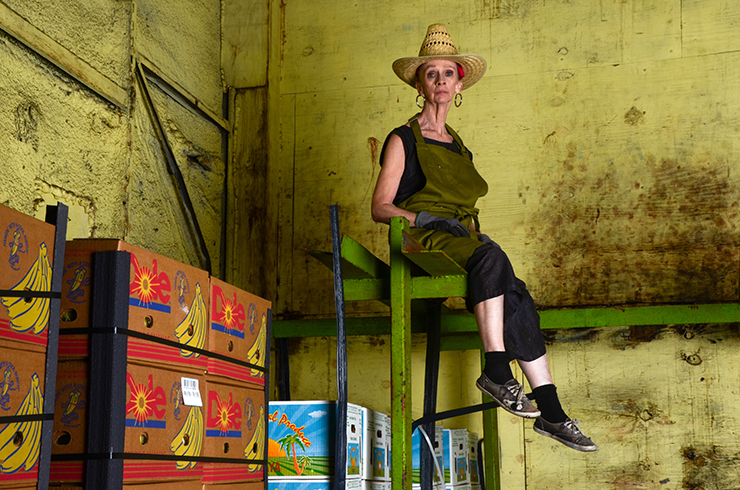 She said, âIn this process of working with Stephan, I had to let go of what my pre-conceived idea was. I had to work from a different place. No, I was forced to work from a different place. But it gave me a sense of freedom to explore. To quote Stephan, Iâm allowing myself to read the site. Allowing the site to tell me what needs to be done there.â

In a site-specific piece, the site actually becomes one of the performers. In Portal-Andreu's mind, she sees the performance as a promenade that takes the audience through the experience of walking through the space, but seeing it in a different way. The park is an open space, especially when the races are not happening. It is becoming a space that is used for many things, not only as a race track. This performance will help to spread the word that the space is and can be used for numerous other activities and events.

She continued, âMy piece is called 'Luck' for many reasons. One, the site itself dictates what the site is for. Two, I am lucky to be able to use this site. Also, the symbolism of the horses that were used to build things and are now in this context are somewhat magical creatures.â

Portal-Andreu feels that not only has she discovered new ways of working on site-specific pieces, but she has also learned much about herself, especially when it comes to working with what is given.

One day they arrived for rehearsal on site, only to discover thatÂ the clubhouse rehearsal areaÂ  was under construction and being refurbished.Â  After some quick re-thinking and decision making, even better options presented themselves.

She said, âSometimes you just need to go with the universe and everything works out as it should.â 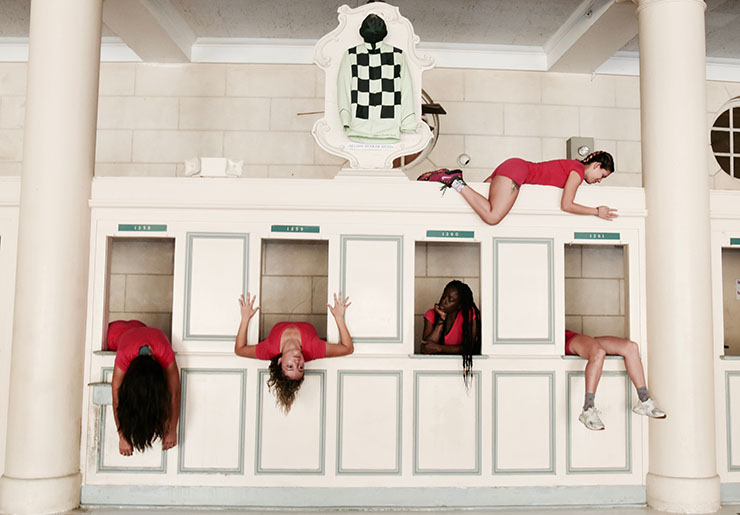 Sandra Portal-Andreu's 'Luck' will be in Hialeah Park.

âI am so excited about this project because it is free and open to the public . It can reach people who may not come to theaters. It is accessible, open to all audiences and free. I have so many friends and family who are excited about coming.â

Liony Garcia grew up seeing his father work in a produce market, a place where Garcia spent many hours as a child. The market of the site-specific piece is owned by his uncle in the diverse community of Allapattah. It is an environment that Garcia feels a familiarity to.

âWhile I had an idea, 'Grass Stains' made me think differently as a choreographer,â Garcia said. âStephen would let me know what Iâm not considering. In this process, Iâve learned what it means to work in collaboration with a site. There are so many things that you think youâre initially working with and then you find there are lots of missing pieces.â

âI wanted to work within a site that had action, labor going on: not a fixed place, Garcia continued. âThis is Miamiâs largest open air produce market and it has been bought out. Meaning that the whole area in the next two years may change. So, I thought it would be interesting to bring an audience into an area that probably wonât be there.â 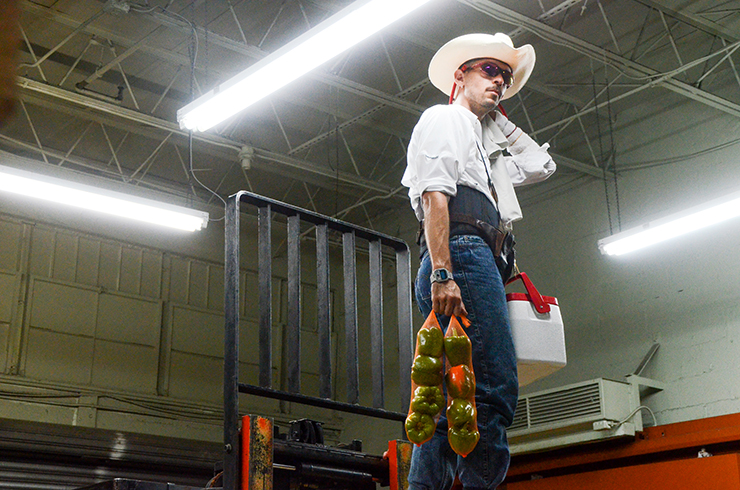 Every time Garcia enters the produce market, the arrangement is different. Within those changes there is an organization. Garcia wanted the challenge of creating with the on-going shifts. He wanted the emotional side of the intense labor to surface, but also wanted to show that this is a business with no emotion at all.

Spending time in the various rooms of the market, led Garcia to create the movement, an abstraction of the labor that takes place in each compartment of the warehouse.

âThe space is similar to a maze, there are changes in temperature, and the audience will enter the back, as the produce does, in the loading dock,â Garcia said. âI think it entangles the whole situation.â

Garcia asked, âWhen do you get to go to a factory, in Allapattah? Now audiences will know this place exists.â

Both Garcia and Portal-Andreu are excited for audiences of Miami to venture into areas that they may have never been to before. They want the spaces to be seen and experienced in a new and different way.

Winter concluded, âOur goal is to create works that are completely unique to the site and could not be applied to another location. In 2019, we are hoping to have a series of dance for seven days in a structured improv in a really populated place like Lincoln Road. So itâs a version of 'Grass Stains' about awareness and randomness in a really populated place. 'Grass Stains' is evolving.â

All performances are free and open to the public.

All performances are free and open to the public.