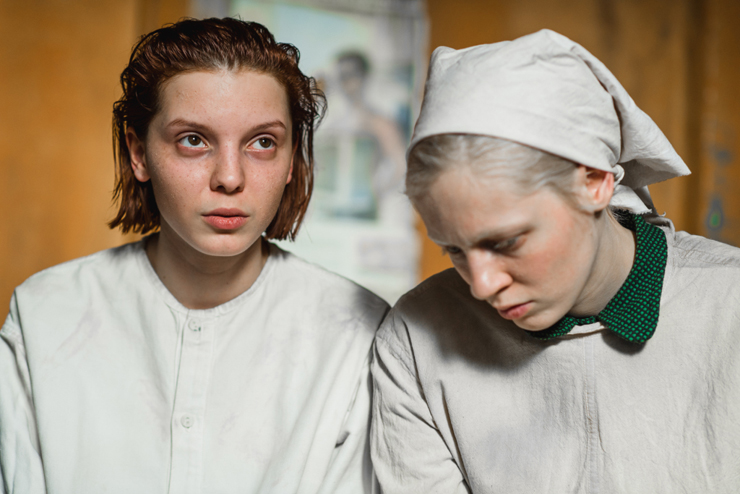 She has to be standing on a stool, right? There's no way she's that tall. But as the somber Russian drama âBeanpoleâ opens, Iya appears to tower over her co-workers. It doesn't take long to notice two things: Yes, she is that tall, and there's also something off about her. Vacant stare, unsettling guttural sounds.

The staff at the hospital in Leningrad wait patiently, suggesting they've seen this episode before. Less than a minute later, ambient sounds seep into the soundtrack, and she's back, all wide-eyed eagerness to serve, tinged with a certain melancholy. The year is 1945, and the beds are filled with bandaged vets on this first autumn after the war. Iya (Viktoria Miroshnichenko) assures a paralyzed sniper that he'll be running back to his family in no time, though his doctor's grim look suggests the outcome is not plausible.

What's immediately striking about this portrait of post-World War II Russia is how immersive it is. The magnitude of the attention to period detail is staggering, yet never calls attention to itself. It breathes authenticity. Director/co-screenwriter Kantemir Balagov, all of 28, takes a cue from Iya's straw-colored locks and bathes most of the interior scenes in a saturated yellow light. It denotes something that's past its sell-by date and is beginning to decompose, a fitting visual cue for a city left in tatters, as its residents try to hold on to a shred of normalcy. 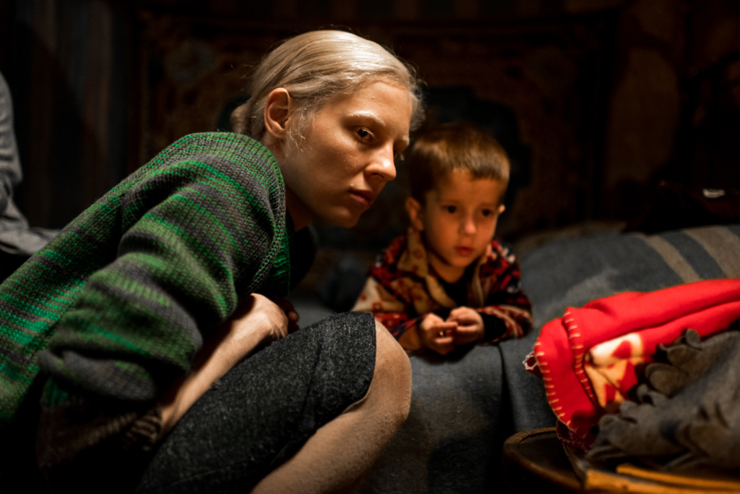 That also goes for Iya, who is caring for Pashka (Timofey Glazkov), a frail 3-year-old boy who viewers might first assume is her own. The purity of their bond propels the early scenes, as Balagov underscores the physical difference between Iya's lanky frame and the boy's small body. Can two people with such fragile dispositions subsist in such a harsh environment?

And then the boy's actual mother walks into the picture. Bold, brassy Masha (Vasilisa Perelygina) struts in like she owns the room, her tan military uniform only enhancing her commanding aura. But how are Iya and Masha related? Are they sisters? Longtime friends? Balagov, working from a screenplay he wrote alongside Aleksandr Terekhov, doesn't spell anything out. And yet details begin to trickle in. âWe fought together,â says Masha, followed by an off-hand mention of anti-aircraft gunnery. 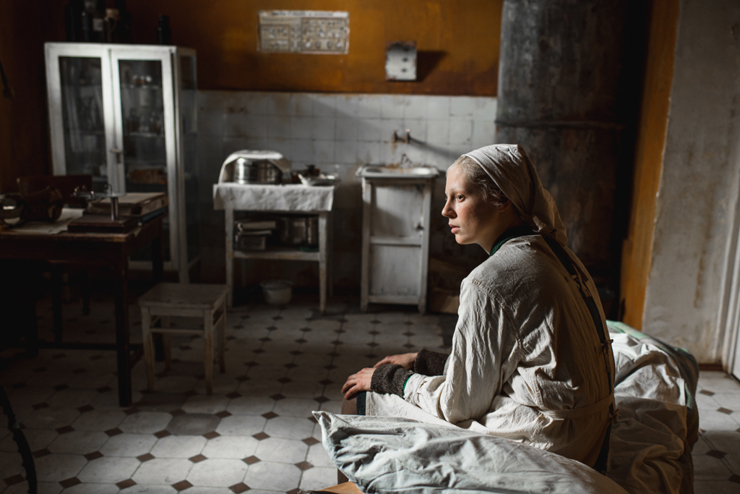 But now that she's back, the first thing Masha wants to do is go out on the town. What's left of it, anyway. This leads her to cross paths with shy, nebbishy-looking Sasha (Igor Shirokov), That random encounter leads to what is perhaps the most joyless car sex scene ever filmed. But rather than be happy for her, Iya's shyness melts away, replaced by an aggressive jealous streak. It's not a stretch to put two and two together here, but Balagov has a more ambitious scope in mind. This fraught (romantic?) triangle is the main story of a handful he juggles here. He also looks in on that sniper, Stepan (Konstantin Balakirev), as he grapples with the certainty he will likely not walk again. A visit from a government official allows the filmmaker to give viewers a closer look at the patients. It amounts to an austere but vivid mosaic of postwar strife.

Tragedy and the demands of Masha's biological clock, meanwhile, intertwine in all kinds of somber ways, but Balagov, to his credit, prevents the film from slipping into miserabilism. Mixing gritty camerawork with inspired use of static long shots, he creates affecting tableaux of despair but stops short of wallowing in the squalor. This is Balagov's third work that is not a short, but it already possesses a seasoned hand's control of the medium. An assured new voice emerges. 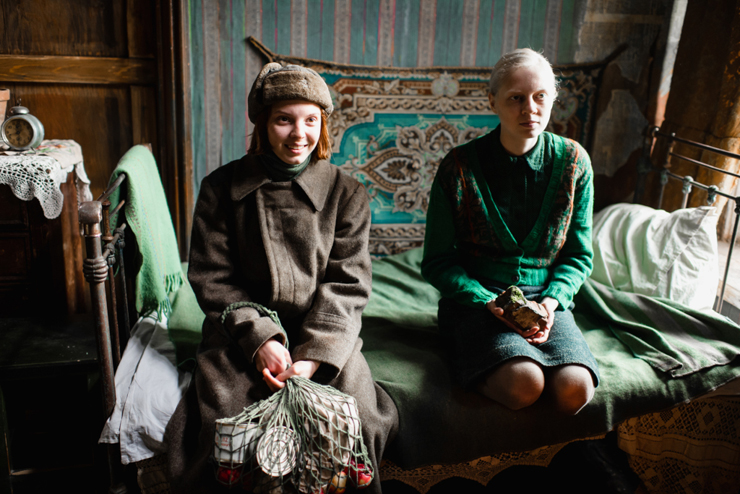 Which makes it somewhat disappointing that the filmmaker, known back home for a rebellious streak, remains unwilling to concretize the nature of the bond that ties âBeanpole'sâ central duo, especially as all the other narrative strands give way to their characters as the movie's eventual focus. That dysfunctional push-pull tension between the women, conveyed in lingering close-ups, recalls the sadomasochistic codependency at the heart of in Rainer Werner Fassbinder's âThe Bitter Tears of Petra von Kant,â but that 1972 movie made no bones about its central couple's relationship. For too much of âBeapole'sâ running time, viewers looking for definitive answers about what's really going on between Iya and Masha have to make do with Iya's mood swings and Masha's apparent lack of physical interest in her.

Thus, it's a testament to Balagov's skill behind the camera that his stubborn refusal to give an LGBTQ audience more specifics is not a dealbreaker. What is very clear here is the raw intensity that bubbles to the surface. The director puts viewers through the wringer, so it's a good thing that Miroshnichenko and Perelygina are both up to the challenge. Their high-wire act helps us us navigate some very tough material. They're riding tall, and rise above this critic's objections. Are you ready to take the plunge? 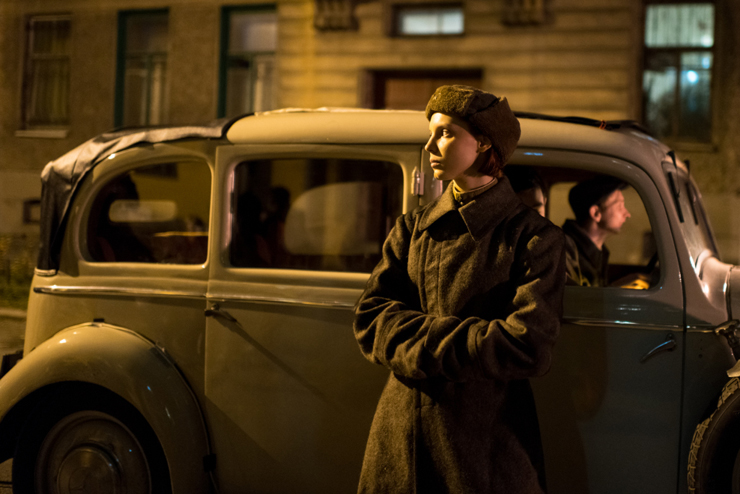