Something's Been Added to Sondheim Musical 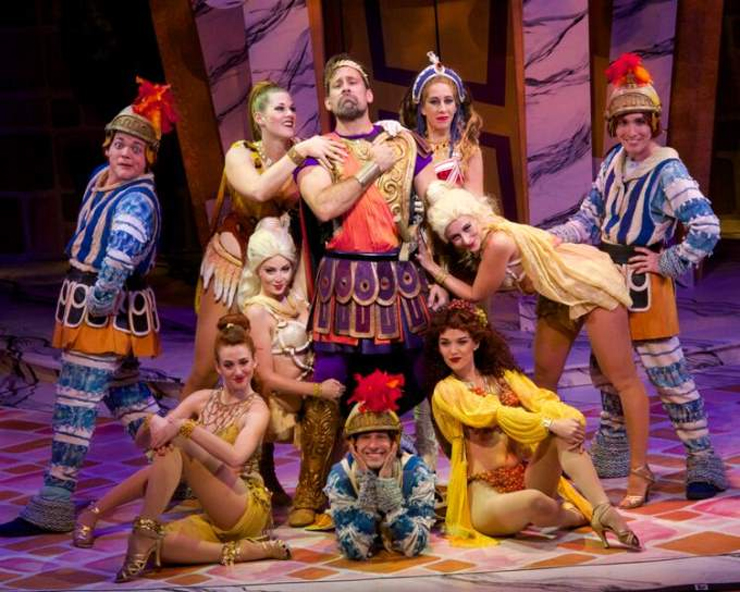 Jim Ballard with Courtesans and Proteans by Amy Pasquantonio.

If It Weren't For The Songs...

If you're a lover of musical comedy classics you might look a little askance at the production of A Funny Thing Happened on the Way to the Forum now running at The Wick Theater in Boca Raton. All the wonderful songs are there, all the jokes, the pretty girls and super singing, but something's been added. And it doesn't help.

It's been turned into a âlet's cater to the Boca crowdâ show with asides worthy of a community hall. Some aspects of the piece are not up to that standard.

But hey, it's Forum, so we can forgive a few blips. Onto the good stuff:

The standout of the show is Jim Ballard as Captain Milos Gloriosus, conquering hero and buyer of the virgin, Philia, played by Whitney Winfield. Ballard is an exceptional comic actor and the show comes alive every minute he's on stage. Thank goodness.

The voices are excellent and the songs are just as fresh as if it were the first time heard. Thank goodness.

âThe House of Marcus Lycusâ with Pseudolus (Ken Jennings) and Marcus Lycus (David Setteducati) and the Courtesans is a highlight, especially amongst the venerable Boca Raton gentlemen. I peeked at the old guy two seats down from me and was delighted to see the eyeballs protruding, the mouth agape and the Adam's apple going up and down like a demented elevator as he watched the Courtesans writhe around the stage.

Broadway veteran Ken Jennings as Pseudolus seems desperate to prove that he's still got it. And he has. He sets a frantic pace, speaking, singing, running, jumping, mugging. Amazing stamina.

The plot? You have to ask? Okay, Senex (Michael Scott) an old man has a son, Hero (Christopher Brand) who's in love with the virgin courtesan Philia. So is daddy Senex. Pseudolus is a slave promised his freedom by Hero if he can fix Hero up with Philia, who is of course promised to Miles Gloriosus. Senex has a wife, Domina (Erika Amato) who has the hots for Gloriosus. Hysterium (Michael Ursua) is the house slave of Senex and Marcus Lycus is politely described as a buyer and seller of Courtesans. Erronius, an old man, (Troy Stanley) has been saddled with a pair of horn rimmed glasses, (it's Rome 200 BC) so we know he's a little blind. Stanley's a good actor. Could he not be allowed to play a little blind?

And the performances? Adequate. Wow, that seems harsh, but from the get go this Forum is played at a monotonously frantic pace. Lines are shouted; it's a comedy, let's act funny, that always works. Right.

A gaily colored cartoonish set by Bruce Walters amplifies the cartoonish aspects of this Forum, and speaking of cartoonish the three Proteans whom I haven't the heart to name are...well, you get the idea.

The book is by Burt Shevelove and Larry Gelbart with music and lyrics by Stephen Sondheim. Thank goodness.

Directed by Bob Walton with less than inspired choreography by Angela Morando-Thomas, lighting by Jose Santiago, sound by Justin Thompson. Music by Canned.