Could Zoetic Stage's Florida Premiere Be Better Than Broadway? 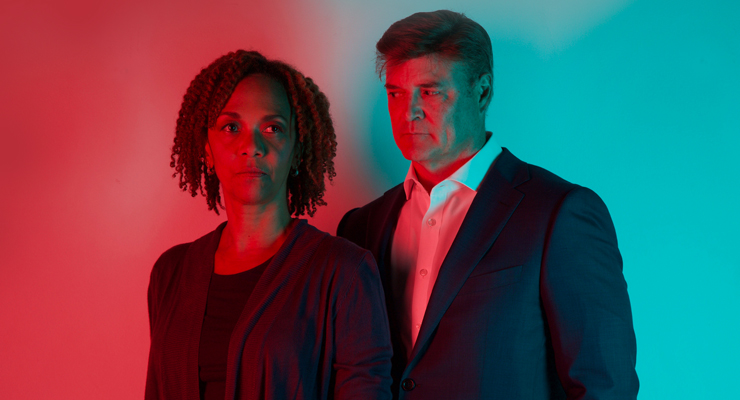 One of those Miami downpours falls outside of windows of a large waiting room. On the back wall, the seal of the City of Miami faces out to what is alluded to be a street. A woman paces frantically around the room. She has her iPhone close. In her back pocket. The phone is her lifeline to her son, Jamal. She hasn't heard from him in more hours than usual and she's concerned. She's reported her son missing and arrived at the police department. They finally tell her that they know where he is; he has been involved in an "incident." But that's all the information "protocol" will allow the police to release.

So rises the tension early on in Christopher Demos-Brown's "American Son," now at Zoetic Stage in the Carnival Studio Theater at Miami's Arsht Center.

The homegrown play, Demos-Brown was one of the founders of Zoetic, had a Broadway run in 2018 and then was filmed for Netflix.

It's interesting to see a Florida premiere written by the playwright with the two local actors (Karen Stephens and Clive Colerton) he had in mind for the parts from the get go; a show that's already been to Broadway, and at regional theaters in other parts of the country, and now we have the privilege of seeing it here.

In its Miami-centricness, there's a kinship that the audience experiences with each other and the actors on stage that Broadwaygoers may not have had the privilege. In fact, a reference to the Arthur McDuffie riots in Overtown in 1980, which was a monumentally racial divided firestorm in Miami, may have gotten lost on some of that crowd. Demos-Brown's character, Kendra, remembers: "My mother was sobbing. I was four years old." For those who are steeped in Miami history, the McDuffie riots, when four white policemen were acquitted for beating a black motorist (he died from his injuries), understand the deep pain of a part of Miami burning literally and figuratively in the first major race riot since the 1960s. 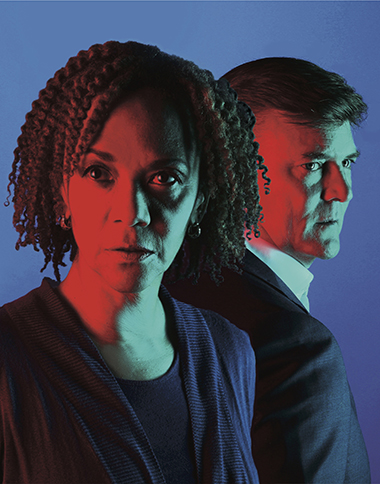 That's the shared experience of the Florida premiere. That's what "American Son" does best. It doesn't tug at emotions, it grabs at your gut with both hands and doesn't let go.

At its center is Kendra Ellis-Connor, an accomplished psychology professor (Stephens) who is frantic over what may have happened to her 18-year-old son. She's protected him from being the "face of race" and now she's feeling helpless. She's fearing the worst. Him out in a Lexus and maybe being pulled over for DWB (driving while black). She's also dealing with a junior cop, who, at every turn gets under her skin. Mostly because she feels behind his stonewalling is a racist at heart. It may be true.

When her white ex-husband, Scott (Colerton), shows up, an FBI guy who wears his badge in plain sight clipped on his belt, the junior cop mistakes him for an investigator on the case and tells him more details about Jamal's plight. It just adds fuel to Kendra's fire.

Stephens embodies Kendra, her pent up emotions of years of feeling she needs to prove herself. The protective mother bear who fears that if she lets her son out of her sight, he'll be fed to the wolves. Colerton's Scott can go from calm to crazy in 0 to 60 seconds. He's a guy who has made more than a few mistakes, mostly in his personal life, but has always found of way toÂ  brush off the soft emotions. Colerton is able to soften the macho Scott in a very tender moment that the playwright has given him where he recounts the days of passion and love when his marriage to Kendra was fairy tale.

Ryan Didato is the junior officer Paul Larkin. Didato plays him with a befuddled naivete that is spot on. James Samuel Randolph always commands a presence on every stage and he does so here as Lieutenant John Stokes.

Director Stuart Meltzer allows the play to evolve without forcing a message or an agenda. Jodi Dellaventura's wondrous downpour set design adds character. Yet, another way that "American Son" immerses you in its dramatic weaving.

In the end, this isn't a play about race or parenting or divorce, it's about how America's sons and daughters are learning to deal with emotions that run high in a modern world where day to day living creates a constant state of heightened anxiety.