It's ULTRA with a C for Cool. In fact, it's quite the antithesis of the noise-making techno boom- boom fest that annoys residents of Downtown Miami until all hours of the night, creates a havoc of traffic for vehicular commuters, and brings out a bevy of interistingly odd international tourists for a weekend in March. Many locals complain about it, but few do anything about it. You have to create what you want to see. You have to make your own culture. You have to create your own roadshow.

The folks at Emerge Miami and Buskerfest have done just that in Miami with CULTRA, thanks to a grant from the Public Space Challenge. CULTRA is a roving open mic that has been held at various public spaces in Downtown Miami every third Thursday since January. Each evening showcase has been hosted by a different, well-known local creative entity, who then performs at the end. I talked to the founder of Buskerfest, Justin Trieger about CULTRA, culture in Miami, and claiming public spaces. 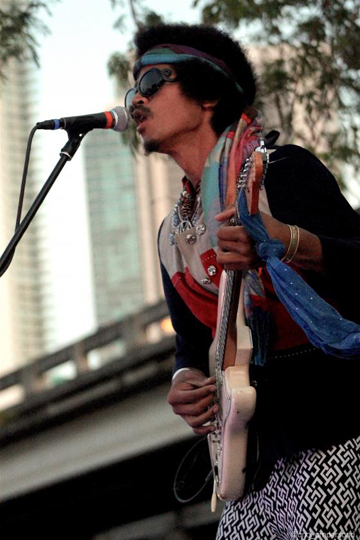 Monica Torres: What was the idea behind CULTRA? What led you to produce this roving open mic in public spaces?

Justin Trieger: CULTRA was designed to accomplish a few key goals. The most obvious is that it provides a platform for performers, something that is increasingly rare in Miami. Another was to demonstrate to attendees non-traditional uses of the parks to expand their ideas of how public space can be activated. The third was to create stronger ties between Miamians and the parks themselves, which are constantly sought by private interests. We hope the series creates a sense of ownership and drives engagement in the parks' futures.

JT: People need to feel empowered and that they are a valued part of our community. By making the events free and allowing the general public to get on stage, we are saying emphatically, "we know you are out there; come show us what you got!" CULTRA attracts people from a wide cross-section of the County and provides space for social collisions that will help spur the city forward in a positive way.

MT: What is in store for people at CULTRA 5?

JT: Tons of talent, for sure. We are welcoming back three of our previous co-presenters: Artistic Vibes, Words and Wine and The Imperial. Each of these groups produces a long-standing open mic and brings a wealth of expertise and diverse audiences with them. The first 90 minutes of the event at Tina Hills in Bayfront Park are reserved for the open mic portion. This typically includes a bunch of artistic disciplines like music, dance, spoken word and comedy. Afrobeta will be blessing us with an explosive send-off to the series following the open mic portion.

MT: Do you plan to continue this event in the future?

JT: I think we and our collaborators (Emerge Miami) have intentions to make this an annual event in future years. It takes a lot of work to do a monthly series (and funding), but we are ready to empower someone else if they are interested in keeping the series more regular. We've got a good system in place for community outreach and logistics that we are prepared to share with the right folks.

MT: What do you hope people in the community gain from this event?

JT: We hope audience members leave CULTRA understanding how incredibly amazing Miamians are and how our diversity is a real strength. Miami is often viewed as a siloed place, but our public spaces and artists are the best tool for addressing that challenge. We hope CULTRA is part of a larger movement to create more engaged community members who value our world-class green spaces and give our artistic community the love and respect it needs.

On April 20, 2016, the event was hosted by Front Yard Theater Collective, an improv, musical act that performs original comedy sketches every, and it was held at Omni park. Psychic Dove, a cross between Jimmy Hendrix and Prince, opened the event with some rockin' electric guitar led vocals. Johnny C sang folk/country songs and played the guitar. Justin Paige read urban inspired poetry. I read from my book of poetry, "Moon over Miami." 2-Down, a rapper and singer duet performed original compositions. Adam Schachner from Emerge read a couple of his Miami inspired poems. Nocturnal Fix played an electronic track and sang through reverb. Electronic Connected sang and played acoustic guitar. George Michael performed rap onto a tracks he produced, and Cezar Padilla sang and played an electric guitar. After the 90 minute open mic, Front Yard Theater Collective performed a routine, improv act in which they asked the audience to answer questions like "What's an object that a grandmother would have?" seeking common questions like "a sewing machine." From there, various characters like a scientist, a hippie, and a Latino provided comic relief.

On May 18, 2017 CULTRA ringleaders will be Artistic Vibes, Words And Wine Open Mic and The Imperial, and it will take place at the Tina Hills Pavilion in Bayfront Park. Electro-savants Afrobeta will close out the night in signature fashion.