It's The Winter Whites in Florida 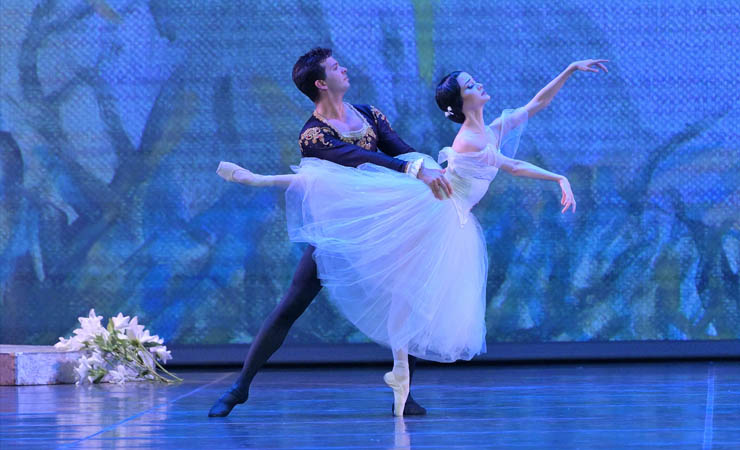 Enter a world of magic, unrequited love, spirits and sylphs when Cuban Classical Ballet of Miami (CCBM) presents an âEvening in Whiteâ on Saturday, Jan. 29 at the Fillmore Miami Beach Theater.

The company is performing well known and much loved pas de deux, trios and excerpts from four different full-length ballets created during the Romantic period of the1800s. Each well- known work is considered to be of the purest and still, the most difficult, form of classical ballet. It is every ballerinaâs dream to perform in these "whiteâ"ballets.

The term "white ballet" or "ballet blanc" refers to the white romantic mid-calf tulle tutus or the classical shorter tutus that are worn by the ballerinas and ensemble. While it was a rather briefÂ  period only encompassing about two decades, the Romantic era of the "white ballets" was a unique and particular time in the development of classical ballet. Not only was it about the white color of the costumes, it also depicted a period of artistic expression, technical skill and freedom in movement.

In the 1800s, dance costumes had evolved from the heavy trappings worn at court, and the masks and wigs of the1700s, to a much less cumbersome attire giving a more ethereal and almost weightless effect. Skirts were shorter and lighter to show the footwork of the ballerina, faces were able to be seen and partnering was expanded to include lifts to show off the strength of the male dancer. The pointe shoe became prominent to create the effect of unearthlinessÂ â or flying. 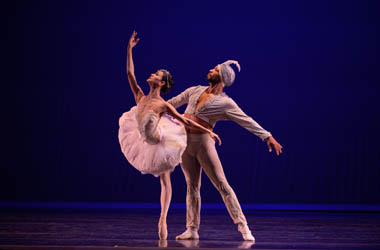 Inspired by the innovation and contemporary ideas of the time, choreographers created dramatic story ballets that were based on trending topics of conflict. Good versus evil, realism versus fantasy and the spirit world were subjects that gave opportunities for choreographers to create magical ballets that would show off the technical prowess and artistic expressiveness of the dancers.

In the present time of dance equality that often requires the male and female dancers to do much the same choreography, especially in contemporary works, the validity and beauty of the "white ballets" offers food for thought.

CCBM Artistic Director, Eriberto Jimenez, says, âThe main goal of the CCBM company is to keep the tradition of classical ballet. This program is spiritual, itâs love. I thought this was a perfect time to remind us of love.â

Dancers convey that they are hungry to do the classics. Basic classical dance is the foundation for the more contemporary dance forms that we see today. In fact, most every contemporary company functions with a daily ballet class before rehearsals. For a dancer, a mastery at executing the most classical white ballets enables them to do other dance forms even better.

âIf a singer doesnât have training for their voice, they will never sing all the things they would like to sing,â says Jimenez. âBallet is the base for everything, the technique, and if you know your body, then you can do any movement.â 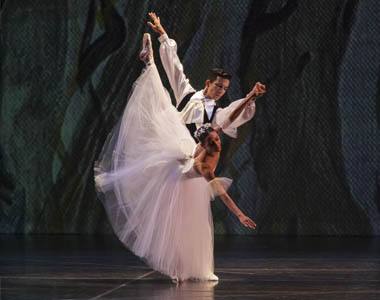 During this time of safety and health concerns, doing smaller pieces from ballets, too, is more possible, more affordable and wiser than working with a corps of many dancers. To that end, to augment the company, Jimenez is bringing four dancers from two other companies who are regular guest artists for CCBM performances. Cuban natives and principal artists, Marize Fumero and Arionel Vargas from the Milwaukee Ballet and Katherine Barkman and Gian Carlo Perez, principal artists from the Washington Ballet, will join the CCBM company of artists.

The "white ballets" are known for their narratives, i.e. story ballets. In a revival of the Romantic era ballets, âLes Sylphides,â premiering in 1909 with choreography by Michael Fokine, was considered to be the first plotless ballet of "pure dance" and was very contemporary for its time. While there is no story, context is provided by a lone man, the poet, who wanders into the woods and is surrounded by sylphs dancing in the moonlight. The ballet is performed to Chopin music and each section is named for the musicÂ â Valse, Mazurka, Nocturne, and Prelude. CCBM will present the ballet with the four main characters, originally performed by Anna Pavlova, Tamara Karsavina, Vaslav Nijinsky and Alexandra Baldina, who were considered dance royalty of the time.

The iconic âWhite Swanâ pas de deux from the second act of the full length ballet, âSwan Lakeâ is a more traditional "white ballet." Originally premiering in 1877 with music by Tchaikovsky, the ballet was reimagined by famed choreographers Marius Petipa and Lev Ivanov to premier in 1895. This is the choreography that is most often seen today. âSwan Lakeâ tells of the love between a prince and a beautiful swan, who, in reality, is a princess under a spell from the evil sorcerer, Von Rothbart. The exquisite White Swan pas de deux, performed the world over, is a feat of artistry, elegant passion and meticulous ballet technique. 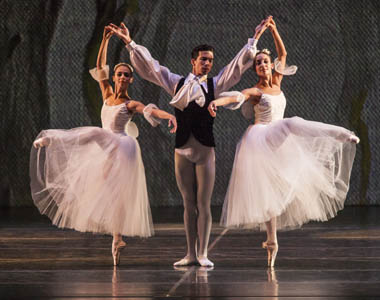 âGiselleâ tells the tragic story of the young peasant girl, Giselle, who falls in love with a disguised, and betrothed nobleman, Albrecht. Upon discovering his true identity, Giselle goes mad and dies. In some versions Giselle kills herself with Albrechtâs sword, in other versions, she dies of a broken heart. Act II is the "white act" as Giselle joins the battalion of Willis, maidens who have been betrayed by their lovers and died before their wedding day. The Willisâ revenge is to "dance to death" any man who comes into their forest in the night. Giselleâs love for Albrecht transcends death, and she saves him from the Willis just as the sun starts to rise and the Willis return to their graves. âGiselleâ premiered in 1841 with music by Adolph Adam and choreography by Marius Petipa, Jean Coralli, and Jules Perrot. The famous pas de deux in Act II is performed by the unearthly Giselle and her Albrecht.

Exotic and sultry, âLa BayadÃ©reâ (the temple dancer) tells the story of Nikiya, a temple dancer who is loved by both Solar, whom she loves in return, and the High Bramin. After Nikiyaâs rejection of him, the High Bramin vows to take revenge on Solar. CCBM will present excerpts from the most famous scene from âLa BayadÃ©re,â the Kingdom of the Shades, a vision scene that is especially known for an extensive corps de ballet that moves along a ramp in unison.

Each of the excerpts and pas de deux featured in the âEvening in Whiteâ reveal the depth of classicism, the artistic expression and beauty of each work and the technical abilities demanded by ballets from the romantic âWhite Balletâ period.

As Jimenez says, âThere is a big audience for classical ballet, but we have to teach the new generations. If we donât present it, how will they know?â

Cuban Classical Ballet presents âEvening in Whiteâ Saturday, Jan. 29 at 8 p.m. at The Fillmore Miami Beach at Jackie Gleason Theater, 1700 Washington Ave, Miami Beach, FL 33139. Ticket prices start at $39 and may be purchased by calling (305) 673-7300 or online at www.fillmoremb.com.