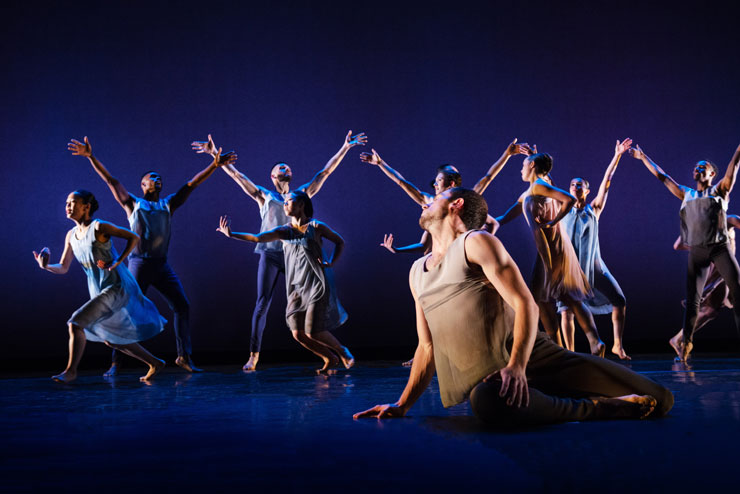 Dancers fly across the floor, with arms meticulously formed into right angles. At a midway point, each artist merges toward a center circle that liquidly morphs into elegant couples moving in diagonal formations from corner to corner. The slower, adage section has lifts that continue the same angled feel, adding a gentleness. Dancers are carried sideways, are tossed up in the air, only to drop to the lowest of lows on the floor. Finally, when exhaustion starts to take over, the entire cast rallies their strength for the third and final movement in a climactic burst of energy and joy. The dancers are smiling at and with each other.

This is Dance Now! Miami (DNM) in rehearsal at its home, the Little Haiti Cultural Center, preparing for its upcoming Thursday, May 12, Friday, May 13, and Saturday, May 14 performances in Palm Beach, Broward and Miami-Dade counties. The piece they are rehearsing is JosÃ© LimÃ³nâs âThe Waldstein Sonata.â

After the run, DNM rehearsal director, Allyn Ginns-Ayers, confirms, among other things, that "the lift is on two" as she responds to the notes given by DNM Co-Artistic Directors Hannah Baumgarten and Diego Salterini. The "Waldstein" piece is as much about community as it is about individuals. Most of LimÃ³nâs choreography manifests itself in movement portraying emotion or narrative.

Both companies have worked with rÃ©pÃ©titeur, Nancy Jordan, to ensure that the piece was staged precisely the same for each organization and that the "merging" of the two companies would be seamless. To continue the partnership, in November DNM will travel to New York to perform with the LimÃ³n company to mirror the performances that are being presented here in South Florida.

The LimÃ³n Dance Company was founded in 1946 by JosÃ© LimÃ³n and American modern dance pioneer, Doris Humphrey. Known the world over, LimÃ³n created a company that expressed emotion through movement. He ignited universal emotions that were tangible and comprehensible through dance. 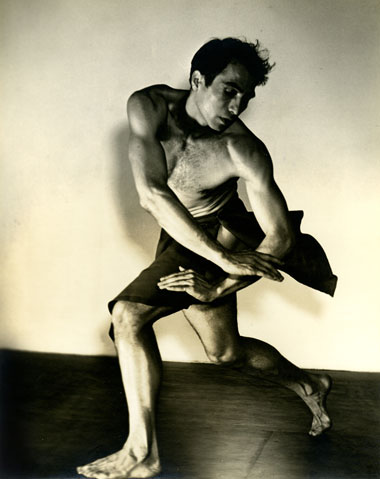 âJosÃ© LimÃ³n and the LimÃ³n company is one of the founding voices of modern dance, expressing the human experience through movement,â says Baumgarten. âWe feel honored and proud that we have created an organization that can rise to the occasion to be performing with the LimÃ³n Dance Company.â

Baumgarten and Salterini, who are the hosts of the collaboration, agree that the energy and emotions from both companies will be high for the three performances.

The LimÃ³n company is celebrating its 75th Anniversary and is under new artistic leadership.

âThis is particularly special. Itâs my first tour as AD, and because in this, our 75th Anniversary Season, we are able to perform JosÃ©âs last workÂ â a work that he didnât finish and that Dr. Lewis was able to complete. The LimÃ³n company has never performed the work. This collaboration with Dance Now, we are so excited and the synergy just feels so right,âÂ Puleio says. 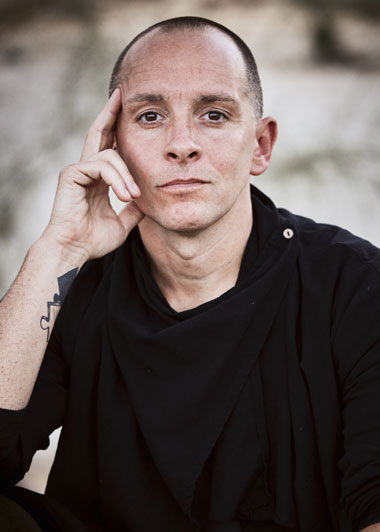 Puleio is speaking of Dr. Daniel Lewis, former LimÃ³n Artistic Director and the Founding Dean of the Dance Department at the New World School of the Arts who completed the "unfinished" âWaldstein Sonataâ in 1975, two years after LimÃ³nâs passing.

As the story goes, toward the end of his life, LimÃ³n had the desire to choreograph to all 32 of Beethovenâs sonatas, an epic undertaking. Working at Juilliard studios, he started pulling available dancers from rehearsals to work with them and create movement. This was in 1971 and he passed away in 1972.

Lewis had worked integrally with LimÃ³n and knew his movement and choreography innately. In 1975, he was commissioned by Martha Hill, then Director of Dance at Juilliard, to complete âThe Waldstein Sonata.â

âAs a choreographer,â Salterini continued, âI know that this is a masterpiece of choreography, the craft of choreography. It is so intricate and beautiful, so musical, so visually stunning.â

Lewis has been the overseer and often the stager of DNMâs five LimÃ³n works. To be performing âWaldsteinâ jointly with the LimÃ³n Dance Company and doing LimÃ³nâs final piece, as completed by Lewis, is a culmination indeed.

Nicholas Ruscica, a dancer from the LimÃ³n company, explains why the LimÃ³n technique resonates to him. âLimÃ³n technique is really sensation based and honors the principles that JosÃ© made a staple of his works - like breath, fall, recovery, suspension, oppositionÂ â these things exist in our life.â

âHe was usually such a narrative creator,â Ruscica continues. âBut this sonata, the âWaldsteinâ was just a celebration of the music. Itâs really us in synchronicity with the music.â 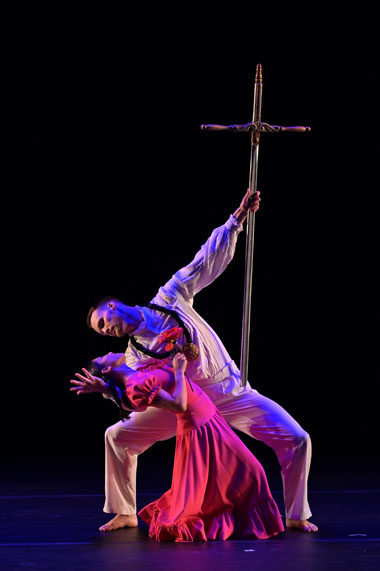 Ruscica says he is thrilled to be doing this joint performance.

âIâm excited to be exchanging with other dancers,â he says. âI personally think the blending of these two groups is going to feel natural.â

Ginns-Ayers has a personal relationship with the LimÃ³n technique and his ballets.

She says, âLearning LimÃ³nâs technique through Dr. Lewis has been a large part of my growth in DNM. Performing this piece that was completed by Dr. Lewis and with the LimÃ³n Company is a perfect way to celebrate modern and contemporary dance in todayâs world. The dance is inside of the music and the music is so beautiful. Itâs just very special.â

The collaborative performances will also reprise Baumgarten and Salteriniâs âAnnusim, What is Hidden is Never Lostâ performed by DNM. It is a ballet that audiences continue to request with an original score from long-time collaborator Federico Bonacossa and vocals from local Sephardic singer Susana Behar and depicts the rarely told story in Jewish history of a decree. In Portugal in 1947 all Jews were to be baptized to become âNew Christians" even though they continued worshipping in their Jewish faith. 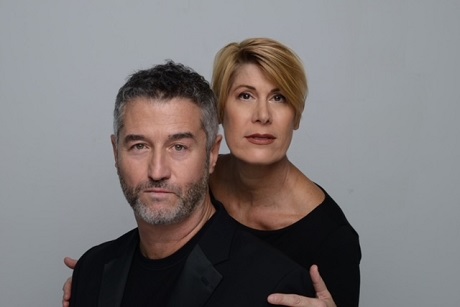 DNM will also present âLa Malinche,â a LimÃ³n classic that Lewis previously staged for DNM. "Malinche" is based on the real-life tale of a Nahua woman who was an indispensable interpreter, advisor and intermediary for the Spanish conquistador, HernÃ¡n CortÃ©s. She became a larger-than-life, controversial figure who played a key role in the Spanish conquest of the Aztec Empire. Initially known to be a traitor, legend has it that âLa Malincheâ is now considered a symbolic mother figure of the new Mexican people. LimÃ³n, of Mexican descent, portrays the legendary and emotional tale through his movement.

In these shared performances, the LimÃ³n Dance Company will present LimÃ³nâs 1967 âPsalmâ inspired by Andre Schwarz-Bart's novel, â The Last of the Just.â It portrays the Jewish tradition of 36 Just Men who have a deep connection to their spirituality and who carry the burdens of the world.

âIt is said that if these individuals didnât exist, the world would be poisoned by all of the sins,â Ruscica says.

Puleio says this is the first time in 40 years that the original music is being used as originally conceived by LimÃ³n.

âItâs outside of what you might expect from a modern dance company with the Hebrew text, the cantor singing - itâs a really interesting work.â says Puleio.

The LimÃ³n group will be in Miami for one full week. They will not only be rehearsing, but have numerous masterclasses and performances at public schools.

A highlight is an open public class in LimÃ³n technique given by Puleio on Sunday, May 8 from 2 to 4 p.m. The class will be followed by a short performance and a panel discussion about JosÃ© LimÃ³n, the company's history and dance reconstructions.

As Puleio says, âWith the two companies together, these performances, this partnership will really ignite that sense of the collaborative spirit and weâll create magic.â

Salterini concurs, âI hope the audience feels that they are dancing with the dancers on the stage.â

Advance tickets and information on current COVID rules for all venues at www.dancenowmiami.org/events/limon.