Embers Of Fame: 'A Star Is Born'

The chanteuse lies on the drink counter, enraptured in her own showmanship. For a few fleeting minutes, she's no longer Ally, former employee at a New York City drag bar, now back to show off her pipes to the regulars. She's ALLY, a supernova whose powerful vocals can bring show business to its knees. Then she turns her head and locks eyes with a barfly. No, not a barfly. A household name, with kind blue eyes staring right back at hers.

There's an irresistible pull to the boy-meets-girl moment that kicks the new remake of âA Star Is Bornâ into gear. That's when it's clear actor Bradley Cooper, here making his directorial debut, is bringing an intoxicating tingle to well-trodden territory. His naturalistic mise en scene blends grit and polish to this deeply felt music biz melodrama with the soul of a Golden Age backstage musical. Rather than shy away from the material's sudsy elements, the film wears them on the sleeve, then adds a killer sound mix, a stirring duet (and other new songs that are fine but not quite as memorable) and a flurry of F-bombs.

But back to that Lower East Side bar, which is where rocker Jackson Maine (Cooper), making a pit stop on the way to the airport after a concert, is wowed by Ally's star quality as she performs âLa Vie en Rose,â with fake Edith Piaf eyebrows, no less. But I've kept you in suspense long enough. What you probably want to know is, how good is Lady Gaga in the titular role? She's every bit as solid as the rest of this competently assembled remake, even though, in terms of performance level, she handles some scenes better than others. Rest assured, whenever she's on stage, she's electrifying.

With way more than a passing nod to Barbra Streisand (circa âFunny Girlâ as much as the 1976 âStar Is Bornâ), Gaga (nÃ©e Stefanie Joanne Angelina Germanotta) ends up being the ideal headliner for this wish-fulfillment fantasy that nevertheless keeps its feet planted on the ground. She's green as a thespian (stints on F/X's âAmerican Horror Storyâ and Robert Rodriguez's âMachete Killsâ notwithstanding), and that quality matches Ally's initial fear and insecurity about her musical chops.

The film's most magical moments, actually, happen during that first night, as Jackson immediately assumes mentor duties on his discovery. As someone who's been in the limelight for a long time, he knows a potential superstar when he sees one. He shares a song he's been working on, and she shares her own lyrics. An impromptu audition is taking place, and while Ally might be ambivalent about her prospects, she also knows a chance like this will likely never come again. (The resulting single, âShallow,â is no âThe Man That Got Away,â but I've had trouble getting it out of my head all the same.) Cooper is so occupied with depicting this meeting of talents that he almost forgets to convey the characters' physical attraction. But there's an organic flow to his storytelling, beautifully rendered by his collaboration with cinematographer Matthew Libatique (âBlack Swanâ) and editor Jay Cassidy (âAmerican Hustleâ). As a viewer, you'd have to be made of stone not to be swept along.

Making this âStarâ shine even more brightly is a strong supporting cast including Andrew Dice Clay as Ally's dad and the esteemed Sam Elliott as Jackson's brother/manager. All the pieces are in place for one shouting match after another, but Cooper keeps the drama on medium-low heat, a wise and inspired move. As an actor, Cooper, who says he was inspired by Eddie Vedder to play this role, is clearly channeling Elliott's deep growl (though I detect a bit of Sean Penn's swagger as well), and in a lacerating argument between the siblings, Elliott calls Cooper out on this mimickry. It's a moment that works in the context of the film (the Maine brother's simmering resentment), but also serves as a meta comment on Cooper's own performance. Artists are a sum of their influences, the filmmaker appears to convey. 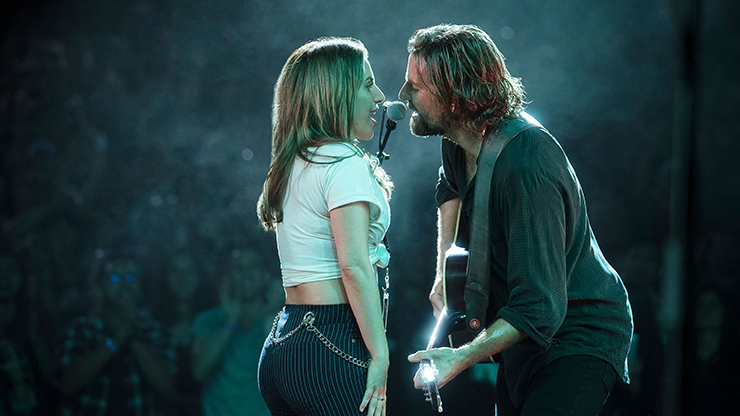 This is the fourth production that bears the name âA Star Is Born,â the fifth version of this tale if you count George Cukor's uncannily similar âWhat Price Hollywood?â from 1932. (Cukor went on to direct the still superior 1954 remake, starring Judy Garland and James Mason.) In narrative terms, Cooper's film covers very little new ground. But in hewing close to its predecessors, it shows just how enduring the allure of stardom is. It sweeps you off your feet with its dizzying tale of Ally's meteoric rise/Jackson's descent, but it never loses sight of the notion that natural talent is but one component behind lasting fame. That convergence of timing and location is a rare lightning bolt, and once you're in the position of having your foot in the door, luck gives way to discipline and work ethic for those who want to go the distance. It's a cycle here depicted as an unforgiving wheel that cannot be stopped.

Yes, the film is less effective in Hour 2, when Ally is shaped into a generic pop sensation and Jackson's disintegration takes over, but that has been a pitfall of every âStarâ incarnation, to varying degrees. What prevails is a commitment to the material that goes well beyond vanity-project interests, as well as a dogged affection for these two flickering flames that burned more brightly as one. Cooper shows a beguiling fascination with the intersection of artistic creation and recreation. He has been entrusted with telling his own version of a beloved Tinseltown perennial, and he delivers in unabashedly cornball spades.

Bradley Cooper's âA Star Is Bornâ is now showing in theaters across the nation in wide release. See it in the biggest, loudest auditorium you can find.