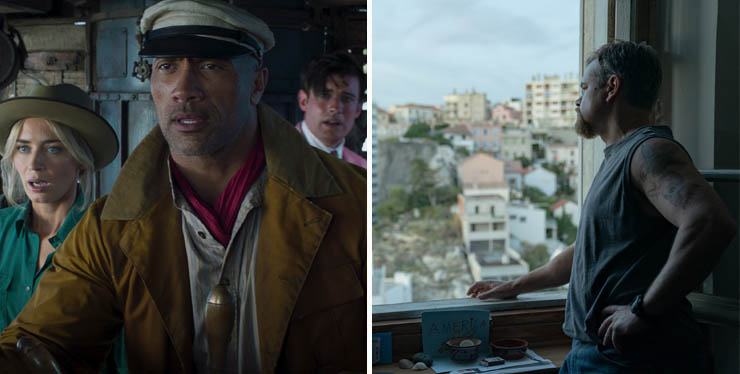 Father's Day was seven weekends ago, but this week sees the opening of two new releases tailor-made for the dads in our lives. Come on, you know a dad movie when you see one: an old-school shoot 'em up, preferably starring an action star from the 1980s, or maybe a comedy filled with pratfalls and double entendres.

The duo I'm reviewing represent dad cinema at its opposite spectrums. One is a Disney adventure, headlined by Dwayne Johnson, that belongs on a late '90s theater marquee but boasts visual effects more reminiscent of the late 2000s. The other is a sobering drama, not exactly dad movie territory, but one that stars Matt Damon, looking like a truck driver, as a man out to prove his daughter's innocence. In other words, wish-fulfillment catnip for dads. Which one is the better option? Hang on to your Old Spice, because we're about to find out. 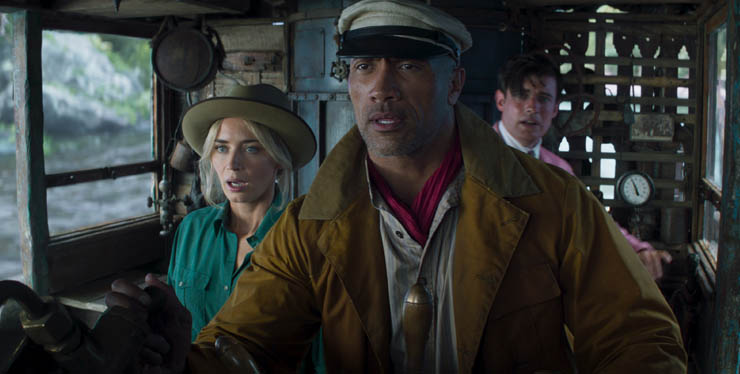 âJungle Cruiseâ: The latest big-budget spectacle from the House of Mouse hits the ground running and seldom stops to catch its breath. From its exposition-heavy prologue, the period extravaganza throws elaborate sight gags, fake looking CGI, cheeky double crossings and a dash of delectably corny plays on words befitting its main source of inspiration: a puntastic Disney Parks attraction you might try right after a big meal, perhaps before an afternoon parade, or maybe when you're decompressing from a more intense ride.

At first, you might wish upon a star that director Jaume Collet-Serra had opted to match the Adventureland staple's more mellow, easygoing vibe. After all, it's a slow moving voyage down a river where the peril takes a back seat to your skipper's groan-inducing puns. But no. âJungle Cruiseâ hurtles forward with ants-in-pants vigor, sparking comparisons to the âPirates of the Caribbeanâ films and the âMummyâ movies starring Brendan Fraser and Rachel Weisz. However, the staging here is so broad and over the top that it becomes much more of a live-action cartoon than its influences.

The film's playful cheerfulness is the very thing that prevents its rough first act from sinking this ship altogether. The year is 1916, and Dr. Lily Houghton (Emily Blunt) is dead set on traveling to South America to find a tree with miraculous healing powers that promise unheard of advances in medicine. Alas, she hits the glass ceiling of England's sexist scientific community, and not even MacGregor (Jack Whitehall), her high-maintenance younger brother, making a case on her behalf, will help get her expedition off the ground. 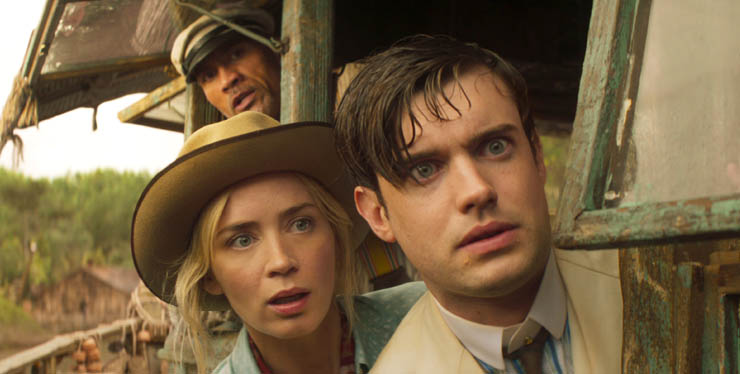 One nimbly executed heist later, and she has the piece of the puzzle she needs: an arrowhead that, she hopes, will show her the way. But where will she find a guide to take her up the Amazon? Cue a shopworn mistaken identity scenario that brings her face to face with Frank Wolff (Johnson), an opportunistic riverboat owner who agrees to take her and her reluctant sibling when he finds out there's money involved. (The less said about Paul Giamatti's cringe-inducing turn as a greedy Italian riverboat kingpin, the better.)

Unbeknownst to our plucky heroine, Prince Joachim (Jesse Plemons, hammy to the max), a power-hungry German aristocrat, is searching for the same tree and is just as driven as she is. With his platinum blond locks, shaved eyebrows and bushy mustache, he comes across as a parody of an Indiana Jones villain, and as such feels right at home with Collet-Serra's tall-tale approach.

But it's not until Lily and MacGregor board La Quila, Frank's trusty but rickety boat, that âJungle Cruiseâ settles on its groove. Something clicks once Blunt and Johnson establish a rapport, and consequently, the movie becomes considerably more enjoyable than its overly frenetic start would suggest. Much like the likably deceitful character Johnson plays, the film's overbearing and a tad too full of itself before revealing other layers, from the characters and the story, that make it a more winsome yarn. 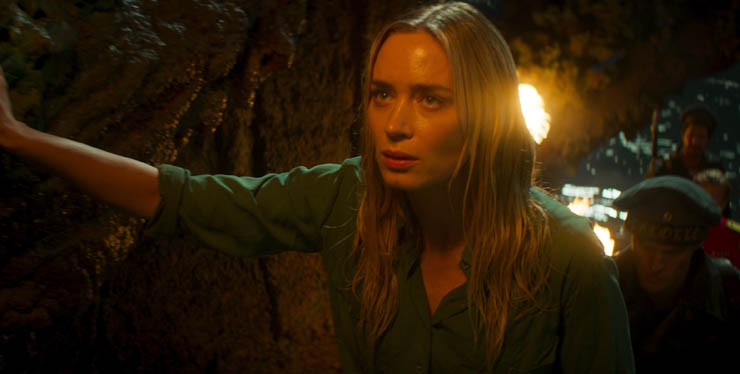 Case in point: Whitehall's conceited Englishman, who reveals in coy but unmistakable terms that he much prefers the company of men. It's a timid reveal, but considering it makes MacGregor the first openly gay character in a Disney action film, this isn't nothing. (It's worth pointing out that Josh Gad's LeFou in the live-action âBeauty and the Beastâ got there first, and that film's director, Bill Condon, arguably took this aspect of the character further than Collet-Serra does in âJungle Cruise,â but that doesn't take anything away from this mild, and mildly satisfying, watershed moment.)

If âJungle Bookâ turns out to be a little quirkier than the brawnier films in its DNA, don't just thank Collet-Serra, a dad movie vet who has a string of post-âTakenâ Liam Neeson vehicles on his rÃ©sumÃ©. Credit is also due to the film's screenwriters, Michael Green (âBlade Runner 2049,â âLoganâ) and the creative duo of Glenn Ficarra and John Requa, the naughty pair behind âBad Santaâ and âI Love You Phillip Morris.â They're unable to fend off narrative whiplash caused by information overload or overcome the oppressively synthetic visual scheme that tends to hobble these CGI-driven productions. And yet, the end result, alternately breezy and overwrought, shows you the virtues of not jumping to conclusions based on first impressions. Much like its characters, you might be surprised to find how much this goofy charmer grows on you.

âStillwaterâ: If Collet-Serra's river tale finds its footing following a somewhat wobbly start, this fish-out-of-water chronicle of an American grappling with across-the-pond disdain and the ripple effects of his past transgressions gets off to a gripping part but eventually loses its way. Before that happens, director/co-screenwriter Tom McCarthy (âSpotlightâ) gives us the usually welcome sight of Matt Damon effortlessly earning the viewer's empathy. Playing an imperfect man seeking redemption in unfamiliar and not always friendly territory, he gives the kind the understated performance that is too often taken for granted.

The Oscar winner plays Bill Baker, a recovering alcoholic working construction sites in between oil drilling gigs. As the movie opens, the Stillwater, Oklahoma resident is saving money to make the trip to Marseilles, where his daughter Allison (Abigail Breslin) has served four years of a nine-year prison sentence for a murder she insists she did not commit.

Young American woman in Europe accused of murder? If the storyline rings a bell, that's because âStillwaterâ is inspired in part by the Amanda Knox case, though the setting has been changed from Italy to France, and several other details are unique to the web McCarthy spins. (The filmmaker has acknowledged the influence of the real-life case but stresses the differences are plentiful. Meanwhile, Knox herself has come out against the film, claiming it's profiting off her wrongful conviction.) 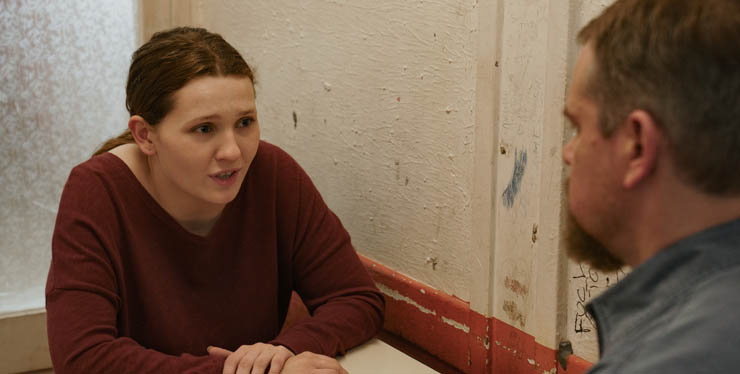 McCarthy's point-and-shoot style gets slammed for being flat (no argument there), but the no muss, no fuss approach lends itself well to this story, particularly in its depiction of father-daughter interaction behind prison walls and Bill's drab, generic hotel. (Yes, Marseilles has a Best Western.) More details surface: Allison came to France to study, and the Arab woman who ended up dead was in a romantic relationship with her, something McCarthy treats as a non-issue. While that nonchalance initially comes across as refreshing, he also doesn't appear to be terribly interested in this side of the character.

Bill knows he still has a long way to go to earn back his estranged daughter's trust, so when the judge refuses to reconsider her case, he takes it upon himself to do the legwork to find the proof that could potentially set his daughter free. Problem is, to do that involves lying to Allison.

Even if you see the rift coming a mile away, it still makes for a compelling conflict. Problem is, âStillwaterâ sidelines Allison for entire stretches to focus on Bill's growing friendship with Virginie (âCall My Agent'sâ Camille Cottin), a stage actress who sympathizes with the visitor's effort to prove his daughter's innocence and offers to help with translation. (Whereas I'm stifling an impulse to yell at the screen for Damon's character to learn French already.) And, as âStillwaterâ becomes less of a character study and more of a crime thriller, it becomes clear Allison's story is the more interesting element, one that should have been on equal footing with Bill's less complicated, more palatable redemption arc. 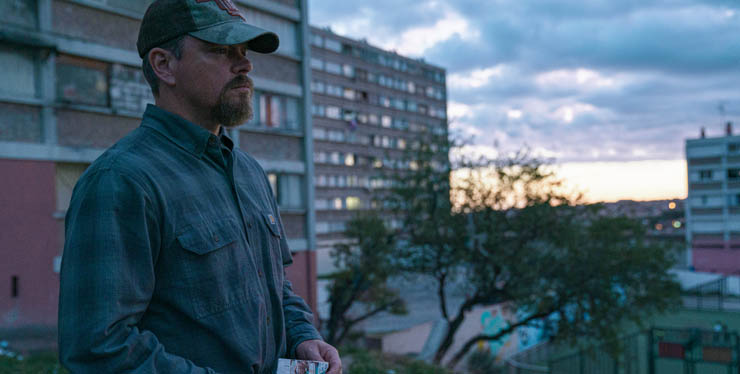 But much like Bill attempts to shield her daughter from the pain of another setback, McCarthy shields viewers from the more horrific aspects of Allison's case, the very elements that would have made âStillwaterâ a more compelling film. Instead, it settles for a didactic portrayal of the cultural divide between the American and French characters before the screenplay, credited to McCarthy and three other writers, cranks up the story wheels in dispiritingly ordinary ways. (It also takes its time. The film is 140 minutes long, and you feel the length.) From a thematic standpoint, McCarthy has been down this road before. In his 2007 film âThe Visitor,â starring Richard Jenkins, he depicted multicultural bonding in more nuanced fashion.

But âStillwater,â which ostensibly aims to explore the shades of gray that makes people take contradictory and self-defeating actions, often with the best intentions in mind, too frequently sees the world on both sides of the Atlantic in simplistic either/or terms. Despite the amount of time Bill spends in France, we never stop feeling like tourists. In terms of its perspective, it feels as if the movie never left Oklahoma. It's beset by too much hand-holding, and cushions its blows when what it really needed was a little more tough love. You know, something a stern but caring dad would offer.