"Job well done." They're three little words people who spend time and effort performing a task to fruition or making a remarkable discovery like to hear. Hard work, especially labor that yields something of lasting value and importance, ought to pay off. And yet, there are those stubborn free thinkers who put in the hours only to have someone else take the credit, dedicated workhorses who only manage to make the footnotes in history books, if at all, when their contributions to their field merit so much more.

The filmmakers in two recent English productions try to pull two such hidden figures from obscurity. Their stories, set nearly a century apart, are told with varying degrees of creative license but with a commitment to stay true to what made these unflappable trailblazers tick, as well as a refusal to sand off their rough edges. They caution viewers not to be deceived by appearances or be swayed by first impressions. They invite you to look beyond a dour or brusque surface to reach the treasure that lies beneath. 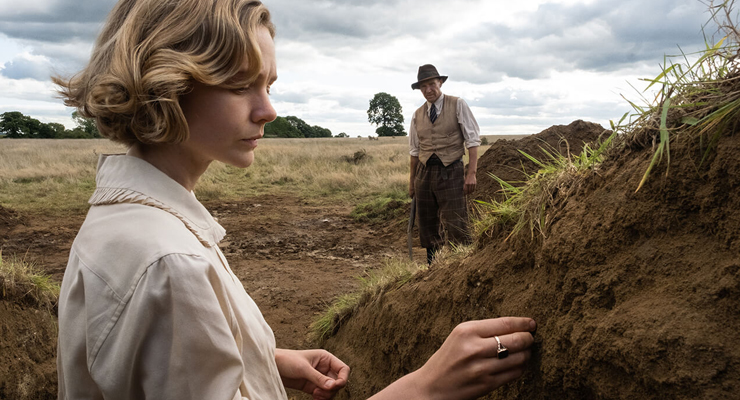 Basil Brown cycles into the nice part of town, and he sticks out like a sore thumb. If he looks like a field worker, that's because he's spent his whole life working the earth. But a lifelong digger like him knows that one goes where the work is, and so he arrives at the Sutton Hoo estate in Surrey and into the employ of its landowner, Edith Pretty.

The year is 1939, and while a pall has fallen over England over the likelihood of war with Germany, Basil's thoughts are instead occupied with the 18 mounds located about 500 yards from Tranmer House, Pretty's home. Basil (Ralph Fiennes) and Edith (Carey Mulligan) survey the land, and it's clear they're walking on hallowed ground. "That speaks, doesn't it? The past," says Basil, as director Simon Stone charts his territory: a walk among the tombstones.

Basil is a self-taught archaeologist and astronomer, but he finds it more accurate to call himself an excavator. Despite his wealth of knowledge, he's a man of few words, and yet Edith, a widow raising his young son Robert (Archie Barnes) who is quietly facing a mounting health crisis, finds something in this unassuming man that speaks to her. They find out they share a particular trait, albeit under different circumstances: they didn't allow not having access to higher education deter them from pursuing intellectual interests.

Basil gets to digging, and so does screenwriter Moira Buffini, who adapts John Preston's 2007 novel for the screen. What she coaxes out of the text is a delicate portrait of two withdrawn people brought together by a common quest, as well as a poignant juxtaposition between unearthing the distant past and the winds of war. Even though the ominous signs are laid on too thick, it gives the film an elegiac gravity. 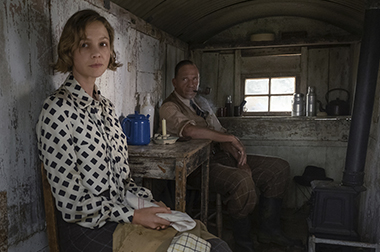 "The Dig" thrives on the thrill of discovery, as Basil makes a whopper of a find in an oval-shaped mound. A handful of rivets suggest there's a ship buried down there that was likely used as a tomb. His former employers at the Ipswich Museum think it's likely Viking, but Basil intuits the vessel is older, perhaps Anglo-Saxon, meaning they're dealing with something from the 6th or 7th century. Alas, once the cat is out of the bag, the bigwigs from the British Museum descend upon Sutton Hoo to take over the excavation. The stage appears to be set for a battle of wills, but Stone and Buffini don't quite see the events playing out that way. They refuse to vilify anyone, and in any case, they appear to be more interested in the personal lives of the people involved in the Sutton Hoo dig than in the priceless artifacts they find.

The involvement of the British Museum causes "The Dig" to evolve from a straightforward two-hander into more of an ensemble piece. Among the new arrivals are Charles Phillips (Ken Stott), the British Museum's snobbish director, archaeologist Stuart Piggott (Ben Chaplin) and his wife Peggy (the ubiquitous Lily James), and Edith's shutterbug cousin Rory Lomax (the sneakily dashing Johnny Flynn). It's rather apparent Peggy is unfulfilled by her marriage to Stuart, who appears rather smitten with Phillips' young associate, John Brailsford (Eamon Farren).

The ensuing romantic triangle between the Piggotts and others is handled sensitively, but it also takes away screen time from the titular endeavor. Buffini's dialogue in these scenes also feels a tad too contemporary for these strait-laced characters. And, as good as Mulligan is here, the two-decade gap between her and Edith, who was 55 at the time of the Sutton Hoo dig, is tough to overlook. (Nicole Kidman was originally cast opposite Fiennes, which would have made more sense.) Nevertheless, the filmmakers do a commendable job of balancing the various narrative strands, even as the movie ought to have focused more on the actual find. 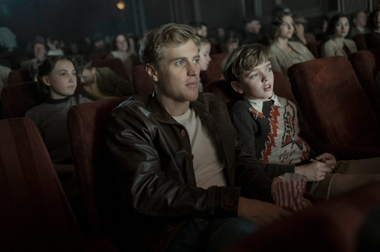 Working with cinematographer Mike Eley, Stone displays a tendency to overuse the wide angle lens, coupled with a penchant to having the characters talk to each other in voiceover narration. It helps keep the film's pace steady, but also makes it feel like the squarest Terrence Malick homage imaginableÂ â tea and crumpets with a side of panoramic views and a dollop of unrequited longing.

Juggling several storylines does not prevent "The Dig" from making us feel for Basil and Edith and their platonic bond, even as it's diluted by some sudsy relationship woes among the supporting players and a resolution that, considering what England was going through at the time, is a little too tidy. But this Netflix release is also period comfort food, heartfelt and elegantly rendered, and as such it's pretty difficult for this anglophile to resist. 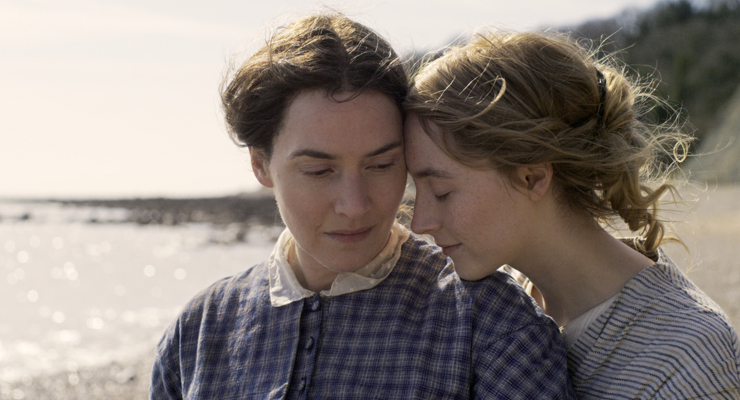 In Mary Anning, Basil Brown finds a kindred spirit from the 1840s. The latest effort from "God's Own Country" director Francis Lee gives the paleontologist from Dorset, who would have gotten far more recognition if she'd been wealthy and male, a showcase as ornery and morose as she apparently was. The film, released in theaters late last year, set up expectations among fans of "Portrait of a Lady on Fire" of another windswept lesbian romance. But those expectations are pretty unfair for a film that's closer in spirit to a film like "Mr. Turner," Mike Leigh's epic portrait of painter J.M.W. Turner, than CÃ©line Sciamma's ravishing love story. 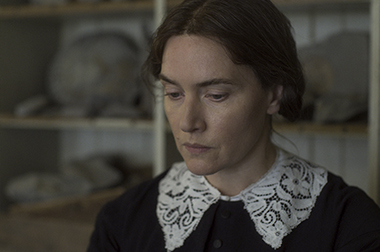 Lee, who worked with Leigh on his Gilbert and Sullivan biopic "Topsy-Turvy," is in no hurry to tell the story of how Anning, whose findings helped change the way prehistoric life is viewed, found romantic fulfillment in the arms of another woman. This is, admittedly, a bit of (exhaustively researched) speculation by Lee, since there is no concrete evidence that Anning was a lesbian. The gamble works, thanks to the filmmaker's on-point storytelling instincts, meticulous yet understated attention to period detail, and a richly nuanced performance by Kate Winslet.

What sets the story in motion is a visit to Anning's shop, where she sells common fossils to rich tourists, by geologist Roderick Murchison (James McArdle) and his wife Charlotte (Saoirse Ronan), who has been diagnosed with melancholia. Mr. Murchison wants to learn about fossils, much to Anning's chagrin. He turns out to be a bad pupil, and also a neglectful husband. He leaves Mrs. Murchison behind, hoping the crisp sea air will help with her condition. When Charlotte falls ill, she looks to the sour-humored fossil hunter for care, and what becomes a reluctant fulfillment of her promise to look after the younger woman blossoms into an unlikely friendship. 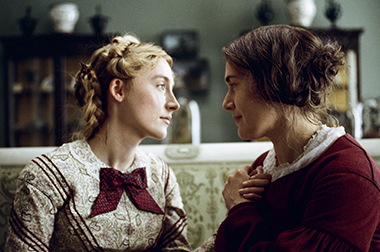 All the elements are in place for a torrid affair, but Lee skillfully integrates Anning's growing bond with Charlotte alongside other parts of her life, whether it's coming to terms with the deteriorating health of her mother, Molly (Gemma Jones), politely yet firmly fending off gentleman-caller advances from the doctor who treats Charlotte (Alec Secareanu, "God's Own Country's" Gheorghe), and checking in on fellow paleontologist, and according to Lee, former flame Elizabeth Philpot (a radiant Fiona Shaw).

It's a rich tapestry Lee has weaved, one that rewards your patience with a lived-in depiction of Victorian England that never feels like period dress-up. (Kudos to cinematographer StÃ©phane Fontaine and production designer Sarah Finlay.) The clothes are hardly fresh off the rack, the furniture weathered from use, and the pillow talk raunchy and uncouth. For instance, a scene that has Winslet reciting a naughty limerick to Ronan is alone worth the rental. As in the most accomplished of character studies, you feel these people have lives after the cameras stop rolling. If there is anything that doesn't quite land, it's an ending that's admirably ambiguous but also abrupt and elliptical in a way that doesn't feel fully thought out. It's an adequate send-off to a pioneer who's otherwise received a tribute worthy of her stature. Give it a chance. 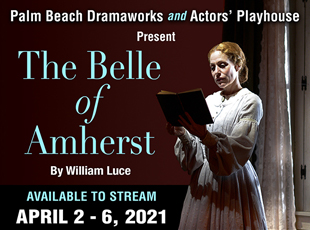 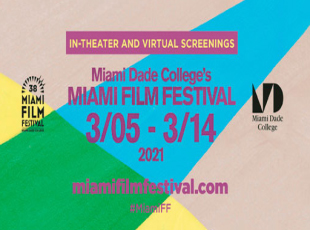