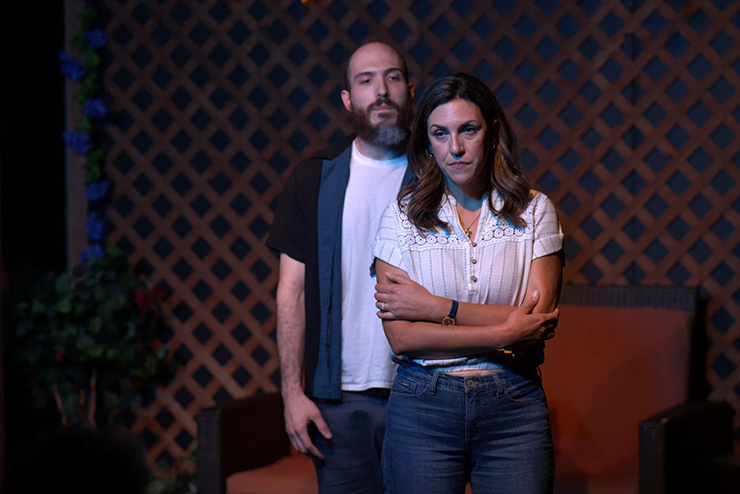 The sound of a rapidly ticking clock, together with a heartbeat, fill the silence in between scenes during Main Street Playersâ intense and funny professional production of the play, "Rapture, Blister, Burn."

Certainly, the aforementioned sound effects by designer Alex Tarradell are appropriate here. After all, time may be running out for Catherine to bond with her mother, who recently suffered a heart attack. What makes the situation even more urgent is that several of the older womanâs close relatives died within a short time after their heart attacks. So, Catherineâs mother, Alice, may not have a lot of time left.

The truth is, Catherine may need strong connections with others once Alice passes; the senior citizen is Catherineâs only close living relative. Besides, Catherine has spent much of her life working as a womenâs studies scholar, leaving no time to have a family, or interact and connect socially with others. As a result, Catherine not only takes off from work to care for her ailing mother, but to take stock of her life.

"Rapture, Blister, Burn," a blisteringly funny and biting comedy about feminism, the choices women make, and the fact that not all women fit the same mold, is running through May 15 in Main Street Playersâ new, intimate playing space in Miami Lakes. 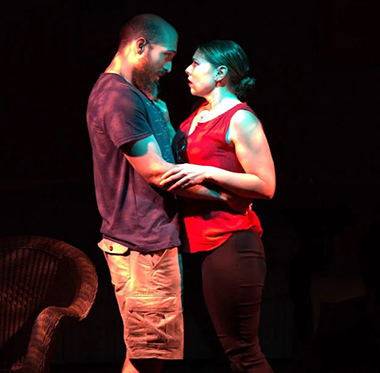 Certainly, the female characters in Gina Gionfriddoâs play are varied. In addition to Catherine, there is her friend from graduate school, Gwen. She is a stay-at-home mom of two who desires the type of lifestyle that Catherine leads. Also, there is old-fashioned Alice, as well as the much younger, modern-thinking Avery. The younger woman is a 21-year-old college student who enjoys womenâs freedom to âhook up,â but does not identify as a feminist.

"Rapture, Blister, Burn" may require you to suspend your disbelief more so than other plays. That is because parts of the playâs plot are not particularly plausible.

For background purposes, about 20 years have passed since Catherine last saw Gwen. She has arrived home in her New England college town to care for her mother. Meanwhile, Catherine reconnects with Gwen, who decided to raise her family instead of holding down a job in the workforce. But Catherine still desires work, so Gwenâs husband, Don, Catherineâs former boyfriend, finds her a job at the university where he works as a dean.

Catherine takes the job, and offers a summer seminar about feminism, which she holds in her motherâs home. Her students are none other than Gwen and Avery. While Alice is not officially a student, she hears what they are discussing. During the class, the women articulate the arguments of feminist perspectives through the ages. Ironically, they fall for the very traps that these philosophers condemned. Also, Catherine and Gwen come to envy each otherâs achievements, and question their own life choices. The result is a funny, romantic love triangle featuring Catherine, Don, and Gwen.

Without preaching or offering simple answers, and with penetrating insight and wit, Rapture, Blister, Burn, a 2013 Pulitzer Prize finalist, takes a deep look at family, career, romance, and the decisions that define a life. The playâs title comes from the Hole song, âUse Once & Destroy.â

Parts of Gionfriddoâs play seem slow-moving and dry. That is because, for stretches, we feel as though we are also students in the seminar, as Catherine lectures, the others listen, and ask questions. Audiences may not know or care about various figures in the history of feminism, or terms such as âfirst wave feminism,â âsecond wave feminism,â and âthird wave feminism.â But, at the very least, you might gain an awareness of how far society has come in promoting gender equality.

Then, there are highly-charged exchanges. No doubt, heat radiates from the stage during these and other intense and tense scenes, riveting us to the stage.

Also, you have to admire Gionfriddoâs descriptive, lively, and unabashedly direct writing style, such as when Don says, âIâm like a fâing dying plant, Gwen. I am withering in the black, sunless hell of your disapproval.â

The playwright also touches on topics such as addiction, motivation, and child rearing. In fact, Don and Gwen have two boys, ages 3 and 13. While we never see or hear them, the playwright uses the offstage youths to, for instance, talk about the state of education today (while Gionfriddo never specifies a time period for this play, she leads us to believe that it takes place in the present).

And you have to laugh in realization when Don says of 13-year-old Julian, âHeâs more mature than either of us.â

But none of the characters are perfect, and Gionfriddo does not glorify or condemn them. She has created them with humanity, and a fine cast imbues their characters with that quality.

Juan Gamero, sporting a shaved head and a longish part-grey, part-dark beard, injects Don with a fiery disposition that makes you believe it is tough to get along with him. In addition, Gamero imbues Don with a bit of a wild streak that makes you believe that his older son is more mature than him. At times, Gamero overacts. However, for the most part, he delivers a convincing performance. 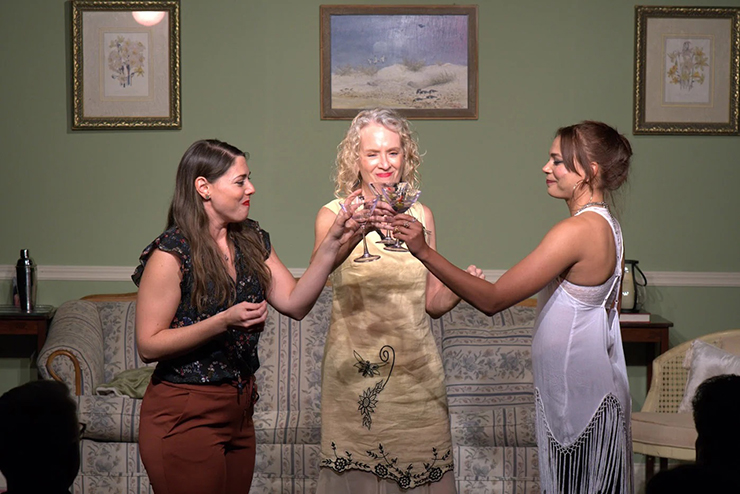 Katlin Svadbik plays Avery with a forthrightness and rebellious streak, endowing her with a laid back, carefree aura. At one point, we see Avery wearing a shirt that reads, âI donât do mornings.â It helps reinforce Averyâs independent nature. By the way, Angie Espositoâs costumes tell us something about each of the characters.

Lory Reyes, with wavy blond hair, red lipstick, and vibrancy in her movement, looks young for the role of Alice, who is in her 70s. Reyes injects Alice with vigor and a zest for living that makes you believe that, by sheer will, she will not allow her heart to fail her. In addition, Reyes imbues Alice with a tender motherâs love, and when she needs to be, she is stern.

Under Danny Nievesâ thoughtful direction, the production flows well and the performers deftly express themselves physically and through their voices.

Meanwhile, Amanda Sparhawk handled the set design and lighting design. As for the lighting, it enhances the playâs realism. Also, Sparhawk uses both sides of a set piece to represent different settings. For instance, on one side is Gwen and Donâs tastefully decorated porch, and on the other side is Aliceâs homey-looking house.

There is space in between the audience and the actors when the play takes place in Aliceâs home. The performers could have been closer to the audience during these scenes, making the performer-audience connection even stronger in an already intimate playing space.

âSix weeks ago, this was a construction site,â Nieves said. Actually, it is still not complete. As of last Sunday, the unfinished tasks included furnishing the dressing rooms.

Main Street Players (MSP), which has existed since 1974, had occupied its previous space since 2004. However, the landlord informed MSP that it had a new tenant for the old property, so the company moved to its new space, half of which used to be Victoriaâs Secret. While the new space is smaller, Nieves said MSPâs board is trying to re-create the previous space as best as it can.

MSP, a former community theater that turned professional in 2017, continues to produce quality productions, and "Rapture, Blister, Burn" is no exception.

MSPâs production of "Rapture, Blister, Burn" runs through May 15 at the companyâs new playing space at 6812 Main Street in Miami Lakes. Performances are at 8 p.m. Fridays and Saturdays, as well as 2 p.m. on Sundays. Tickets cost $30 for general admission, and $25 for students and seniors. For tickets, visit www.mainstreetplayers.com/tickets, or send an e-mail to info@mainstreetplayers.comÂ orÂ (305) 558-3737.