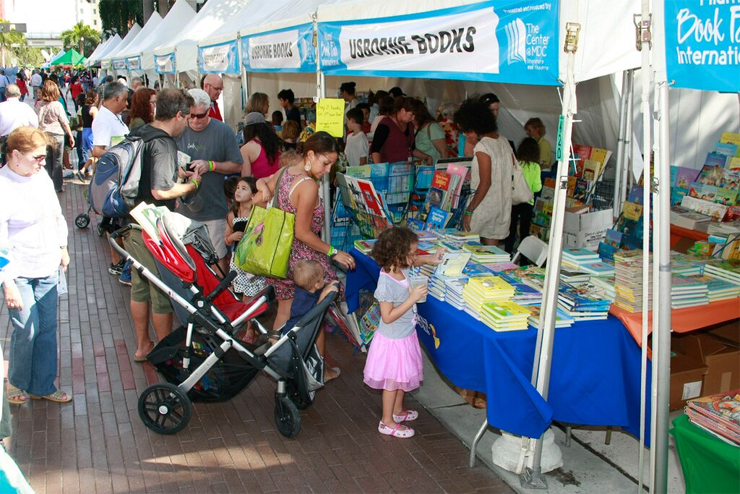 The universally respected Miami Book Fair has been whetting our literary appetites with author talks and information since early September.

Tailored to all interests and age groups, The Center for Writing and Literature @ MDC presents a jam packed week from Nov. 15 through 22, held at Miami Dade Collegeâs (MDC) Wolfson Campus. The Street Fair runs Friday through Sunday, Nov. 20 through 22, with 200 exhibitors proffering books in crayon colorful booths, which are peppered about the autumnal streets of downtown Miami. It is not a somber event for those heavily techno savvy and fearful of a musty dusty library experience. Nope. This fair Book Fair fare has life, sunshine and verve to spare.

The official and impressive laundry list of authors is now up on line for your perusal:

Local stories and talents are not shortchanged. I asked three of our past or current Miami resident presenters a few questions. 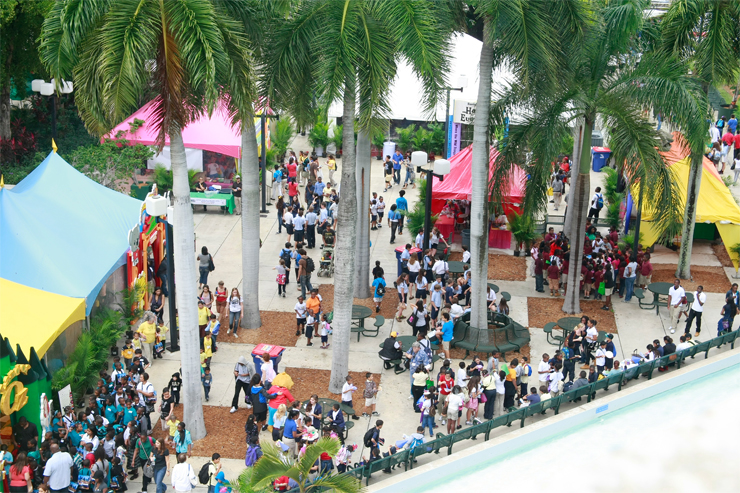 The Book of Luke, My fight for Truth, Justice and Liberty City by Luther Campbell

Multi-million dollar hip hop enterprise founder of Luke Records and front man of 2 Live Crew has a lot to say on the home of his birth.

IS: What is the most interesting change you see in Liberty City recently? What more would you like to see happen to resurrect the import of this inner cityâs role in Miami, and on what stage artistically?

LC: New commissioner is the most interesting change. Liberty City needs to lay out a clear plan or blueprint of how the area should be structured by designating a business area as well as an artistic area. To resurrect Liberty City, we need assistance for current black business owners and resources to encourage people who live there to establish businesses there, rather than having outsiders come in and steal the profits. The youth programs need a lot of work and schools should focus more on the arts and trade professions. Instead of spending money on crime prevention in schools, metal detectors and the like, they should offer courses in music, video production, and computers to express themselves and lessen frustration. We need more trade schools because those who may not have opportunities in sports, may not be interested in college. Face it, not everybodyâs going to go to college and trade schools can be a great thing. 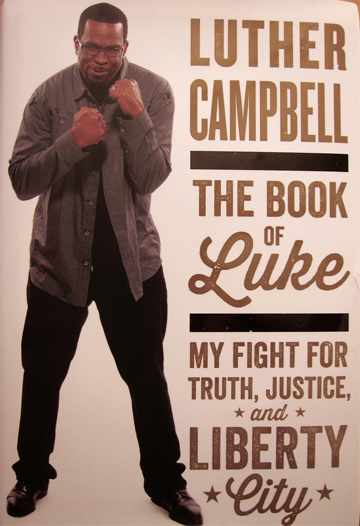 IS: What key piece of your information do you see as most important to share with the immediate world via The Book of Luke? What do you see as Liberty Cityâs greatest stumbling block to future success and what is itâs main strength and offerings going forward? What needs to be preserved to historically weave the past and future as you see it?

LC: I say this with humility, The Book of Luke, is full of so much important and relevant information, that I even surprised myself. You donât really know what your life looks like until you put it on paper and see it spread out before you.

A lot of people assume the book is about partying and nonsense, but I guarantee that it will open peopleâs eyes to what is happening around them and what they need to do to avoid being a victim of systemic racism. Between the World and Me, that bestselling book, tells people how Blacks have been wronged by white people since day one. My book tells you how to get around it, how not to become a victim of it. It can even be read as a map on how to own your own life. The Book of Luke tells you how to see the trap set before you and say, âNah, Iâm good.â So, if I have to say THE MOST important message I want to share is that the real heroes in the Black world, the people who do more than just run their mouth, the ones who donât just show up for the awards, the ones who actually care about themselves and the community and put in the work, will always be overshadowed by the clowns. You ainât going to find the truth on Page 1. You have to dig for it. The people of Liberty City were duped by the system, but Liberty City has strong willed people. They love Liberty City. Itâs a place worth preserving. It has wonderful historic homes and theaters. We need to restore 7th Avenue and 67th Streets and African Square Park. We also need to encourage people to return to Liberty City, especially those who moved north. I will continue my fight for Liberty City and the people who live there.â 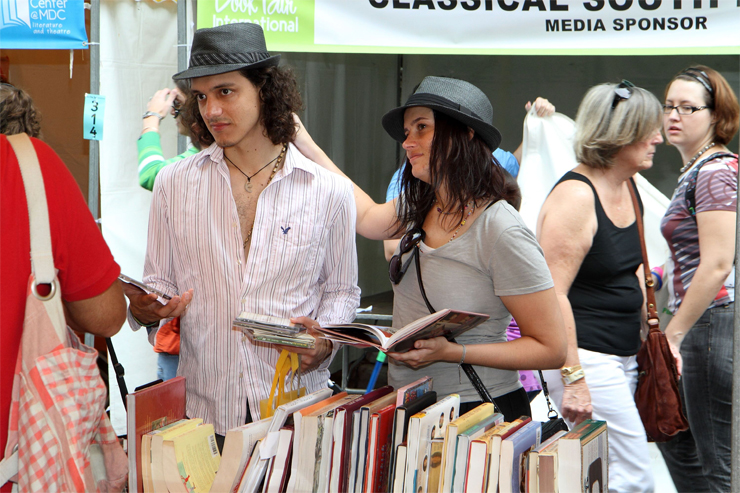 Robert Is Here, Looking East for a Lifetime by historian Cesar Becerra.

There is more to Homesteadâs Robert Is Here produce stand than juicy tropical fruit stains and addiction forming key lime milk shakes. Every family has its tale of ups and downs, peppered with characters like a nefarious uncle buoyed by the grit of its tough as nails womenfolk. Our South Florida iconic agricultural Moehlingfruit stand family is no exception. I interviewed their kingpin, Robert Moehling.

IS: I have been a fan of Robert Is Here for a few decades. The warmth of the family comes through with the most perfunctory drive-by to your fruit and vegetable stand. I am always impressed by the way the family pulls together, and especially gob-smacked watching every family member add up our purchases on a brown paper sack quickly and efficiently as we babble happily. How did you manage to spend every moment at this business and still raise children who are exceptionally capable and respectful?

RM: It is because I have a tremendous wife (Tracey) who understands the responsibility I had to make this business work, she did most of the work at the home-front.

I was almost never home for dinner as a family. I did the best I could do, I coached pee wee football, went to every sporting event that all four kids played in. My mother was a huge part of me being able to get away and spend time with my family. And my family was at the fruit stand a big portion of the time, I required them to all work starting at 11 years old. By them working next to me, it created an understanding to the type of hard work it takes to keep a business like this going.

IS: The warm and fuzzy Moehling family (whom I have a long standing knowledge as a 20 year veteran shopper at Robert Is Here) by page four of this book, slides into the family background of mayhem and dark, survival ridden stories. It has snippets from the south side of Chicago, Al Capone and the tough, take-no-prisoners attitude of your biker chick mom. How did your motherâs difficult background affect who you are today?

RM: My mom was the hardest working person I have ever known. She taught me how to enjoy my family, even though I am working hard, long hours. My mother taught me the three rules I live by; honesty, integrity and hard work are the keys to success. 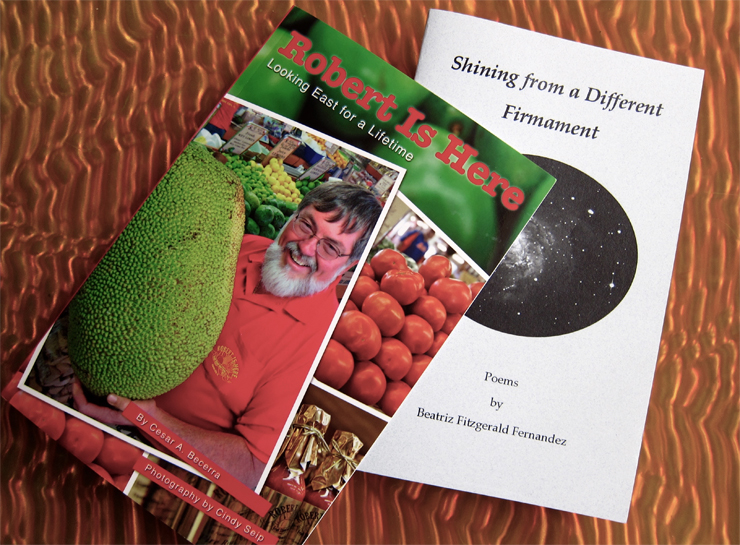 IS: Why did you decide now was time to allow the bookâs author and historian, Cesar Becerra to record your familial tale? (I am just a tad selfishly concerned as your produce stand is jam-packed enough on a gorgeous winter weekends as it is.)

Shining From a Different Firmament by Beatriz Fitzgerald Fernandez

My third choice to brain pick is an award winning local poet. Fernandez utilizes a womanâs perspective, addressing many seminal moments in history: Hypatia was one of the last great thinkers of ancient Alexandria, Egypt and one of the first women to study and teach mathematics, astronomy and philosophy. Did Hypatia get tenure andan âAâ for her effortsâ¦â¦oh, no, no, no. A mob of Christian zealots grabbed her from her carriage, dragged her into a church, stripped her and beat her to death with roofing tiles before tearing her body apart and burning it. Hence, Fernandezâ pithy wrath in her poem, Hypatia Revenge.

The Miami poet and FIU reference librarian is no shrinking violet. She addresses the deep injustices bestowed upon women throughout the ages.

IS: Your work in Shining From A Different Firmament deals primarily with strong women âdone wrongâ. They are, without exception, an intriguing read. What prompted the subject of this book and how did your purpose morph, if it did, as you did each piece?

BFF: I didnât start out with the intention to write primarily from the point of view of historical, legendary and fictional female characters but I think my strongest work is reflected in these persona poems. When Iâm writing them, I feel like Iâm channeling their voices. These are women whose story I find fascinating, either because I read about them as a child or because they stood out in some way. In the case of Cassandra Austen and Heloise... I deliberately used a few expressions that can be found in their correspondence to better reflect their style of thinking.

I have almost completed another book of persona poems, Voices Incandescent, and Iâm working on a biography in poems about Ada Lovelace, Lord Byronâs daughter.

One of my reviewers, Lucy Johnson, editor of the Quarterday Review noted "Your voices of all the women in these pieces remind me very much of Ovid's Heroides, a series of letters from women in Greek myth to their lovers. It was the first time, perhaps, where a specifically female POV had been presented."

IS: I see your middle name is Fitzgerald, a nice literary moniker. Any relation, either by genetics or interests?

BFF: No, no relation! I use it to honor my Peruvian motherâs surname, whose grandfather was from Cork County, Ireland; my mother always encouraged me to read and write poetry.â

IS: And who are your most revered poets/writers?

BFF: Some of the poets I most admire are Mark Strand, Kay Ryan, Mary Oliver, Jorge Luis Borges, Pablo Neruda, Stevie Smith, Dylan Thomas, John Keats, William Butler Yeats, and my teacher and mentor Andrea Hollander. Iâve been reading poetry since childhood and I imagine everyone Iâve read has had some influence on me whether I realize it or not.

The first ever urban wall mural (and poster image) for the 2015 Miami Book Fair,