Over the past five years, Slow Burn Theater Company has gone from struggling upstart to a musical theater force to be reckoned with. Now with their current production of Bonnie & Clyde, they have outdone themselves, producing a sexy, steamy, sultry show that would be at home on any Broadway stage. 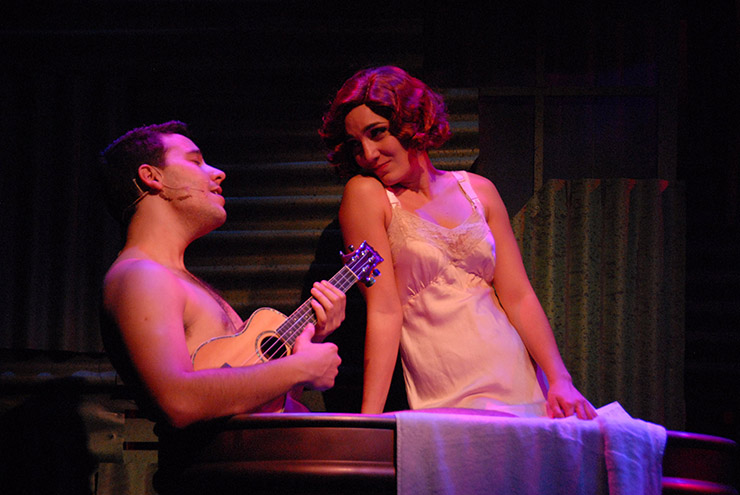 The true tale of Bonnie Parker and Clyde Barrow is one of Americaâs more fascinating cases of infamous celebrity. In the early 1930s, the young lovers ran roughshod through the southern and Mid-western part of a country in the grip of the Great Depression. At first painted as folk heroes for robbing the big, bad banks that foreclosed on dirt-poor citizensâ homes, the tide turned as the pair shot and killed civilians and lawmen alike until they met their inevitable, bloody end. In 1967, their crime spree was romanticized by the titular film starring Warren Beatty and Faye Dunaway, introducing a new generation to the criminal couple and cementing their love affair in pop culture history.

The musical Bonnie & Clyde, with a book by Ivan Menchell, lyrics by Don Black and music by Frank Wildhorn had a Broadway of only 36 performances. While Menchellâs book is often formulaic, Wildhornâs music is evocative of the era and, paired with Blackâs often snappy lyrics, make for some terrific songs.

The musical wisely opens with a hail of gunfire, Bonnie and Clydeâs bullet ridden car and the two lovers slumped inside, getting that inevitability out of the way. That somber scene is juxtaposed with a young Bonnie mooning over a movie magazine, singing her dream of being an âIt Girlâ like star Clara Bow, and a young Clyde with a gun, waxing poetic about Billy the Kid. The story follows their short lives â both were in their early 20s when they died â through their love-at-first sight meeting, their criminal career and their date with death. 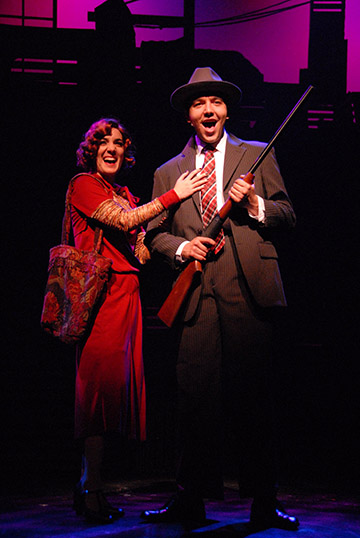 Their story is on paper, but it is director Patrick Fitzwaterâs vision and his castâs and design teamâs considerable talents that bring their tale to life. Fitzwater is especially adept at making more on stage than there is on the page, never more so than with this script.

But the flaws in the script are overshadowed because the chemistry between Jessica Brooke Sanfordâs Bonnie and Bruno Fariaâs Clyde is palpable from the very beginning. Each encounter reeks of raw sexuality. Sanford and Faria perfectly portray the longing and urgency of illicit love, and the poignancy of true anti-heroes â you canât help but root for them even though technically they are the bad guys and you know how their story ends.

Sanford, who appeared last year in Slow Burnâs Carrie: The Musical, has a fine voice and captures Bonnieâs evolution from an idealistic girl in love to a woman resigned to her fate.

Faria is a real find. Not yet graduated from college, he already possesses the dynamic vocal power and stage presence of a veteran leading man.

The Bonnie & Clyde design team is spot on. Fitzwater works his choreography magic in several numbers, notably the defiant âMade in Americaâ the comic âYouâre Goinâ Back to Jailâ and the rousing âWhen I Driveâ. Emmanuel Schvartzmanâs musical direction is perfect. Sean McClellandâs ramshackle set is a fitting rendition of time and place. Lance Blankâs lighting enhances the steaminess of the story. Danny Butlerâs sound is excellent. And Rick Penaâs costumes show the careful research that went into his design.

Slow Burnâs Bonnie & Clyde is one of those shows that people will be talking about for a long time to come. Donât be left out of the conversation. Donât miss it.