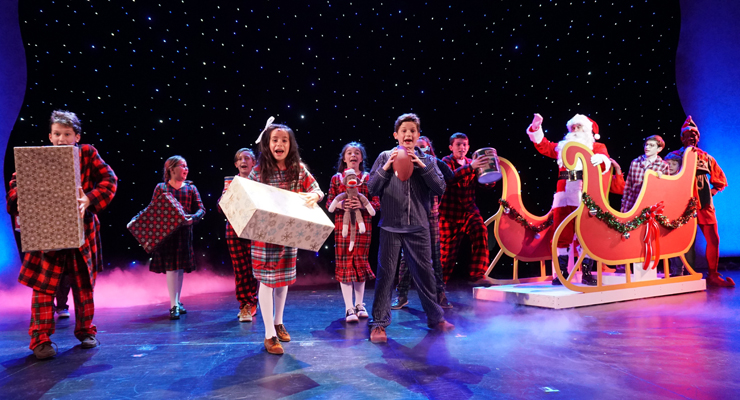 "A Christmas Story's" J.R. Coley as Santa, Michael Norman as Ralphie (in the sleigh) and Ensemble - photo by Rodrigo Balfanz

The 1983 film "A Christmas Story," earned itself a presence in the holiday movie canon. Giving it a boost in its popularity was that, 14 years after its release, cable network TNT began running it as a continuous loop on Christmas. It then joined the ranks of classics "It's a Wonderful Life" and "A Christmas Carol."

There is a modern relatability to "A Christmas Story," the tale of a slightly off-kilter family, a father, mother and two boys, living in small town Hohman, Indiana, in the 1940s. It's a slice of life in the world of the Parker family and nine-year-old Ralphie who is counting down 24 days until Christmas.

What made this story stick in the hearts and minds of people yearning for a new holiday classic was, and still is, a look at a real-life family Christmas. Overall, there's a sense of cynicism about everything that surrounds the holiday for the Parkers, from rampant commercialism to the expectations of the perfect and festive home-cooked dinner. 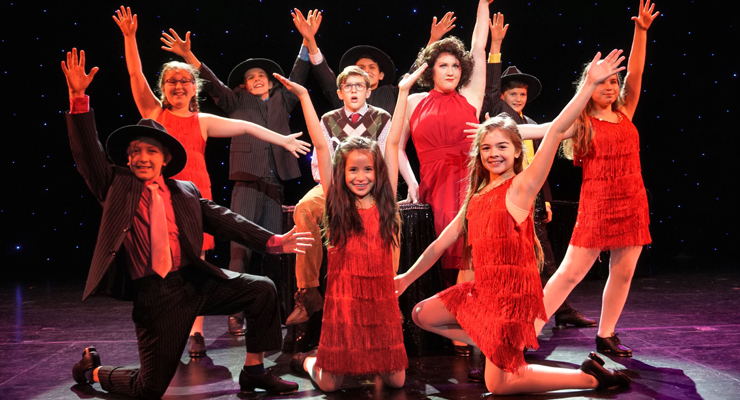 None of this is lost in Slow Burn Theater's A Christmas Story, The Musical" now on stage at the Broward Center's Amaturo Theater. The musical version arrived on Broadway on Nov. 19, 2012, almost 30 years after the low-budget flick was released. The musical score has since become a piece of Broadway legend since the songwriting team of Benj Pasek and Justin Paul, became Great White Way superstars for "Dear Evan Hansen," which swept the 2017 Tony Awards.

The narrator remain as in the film, Jean Shepherd (Matthew Korinko), but while Shepard was a voiceover in the film, but here he is a presence, much like the infamous Stage Manager in "Our Town," whose tasked with guiding the audience in delivering context.

"A Christmas Story" came from Shepherd's first book of short stories called "In God We Trust (All Others Pay Cash). Ralphie Parker has his eyes on only one prize from Santa Claus -- a Red Ryder BB Gun with a "compass and a thing that tells time." His efforts are consistently thwarted by adults telling him "You'll shoot your eye out."

Slow Burn Theatre director and choreographer Patrick Fitzwater ensures nothing is missed for fans who come expecting to see the movie's infamous story bits, such as the aforementioned favorite running "shoot your eye" out joke. Here it runs even further as a tap-dance musical number. There's the hideous fishnet stockinged lamp that The Old Man (Tony Edgerton) wins from a mail-in crossword puzzle contest (another showstopping tap dance vignette), Ralphie's pink Easter Bunny onesie from his aunt, the trip to the Chinese restaurant on Christmas after the decimation of the family's turkey dinner by mangy neighborhood dogs, and a snowsuit that traps little brother Randy (Jaxon James) like a straitjacket. It's all here, and more. 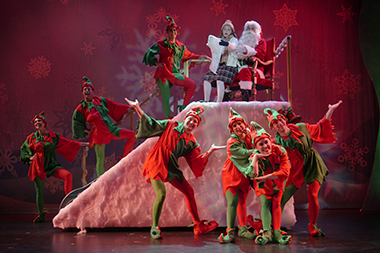 "A Christmas Story" J.R. Coley as Santa and Esemble - Photo by Rodrigo Balfanz

Difficult to imagine that a musical score could so seamlessly fit into such a kitschy script, but Fitzwater ratchets up the nostalgia in his production for an all-out musical extravaganza. He's also recruited a great and talented cast right down to the members of the kid ensemble.

Edgerton as The Old Man steals the show many times but he's a triple threat in the musical number "A Major Award" when visions of leg lamps, both big and small, dance in his head then come to life as a kick line. Edgerton's got the chops both vocally and in the dance department to make this winning number work.

There's the Act II opener of the memorable triple-double-dare of Ralphie's classmate to stick his tongue to a frozen metal flagpole. Jackson Greenspan as Flick handily lisps out the song "Sticky Situation."

Lindsey Corey, always able to reinvent herself in any part, is schoolteacher Miss Shields who has her vamp moment in the group tap number, "You'll Shoot Your Eye Out." She's paired with the kid ensemble dressed as gangsters. The amateurs more than keep up, tapping up a storm as if they'd been schooled by Savion Glover. 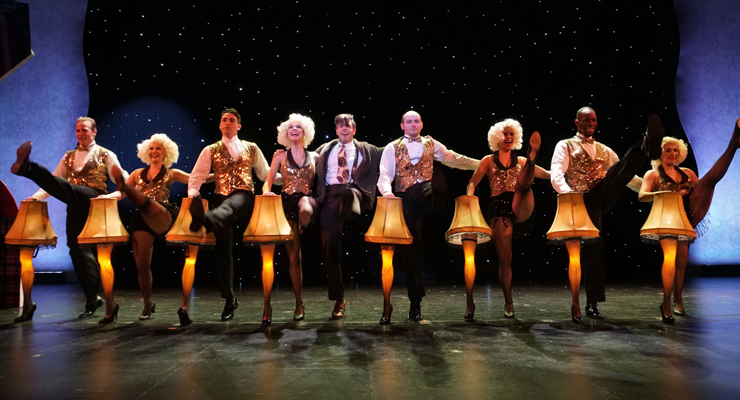 Amy Miller Brennan, who never ceases to delight in any role, as Mother is delightfully ditzy, yet smartly nuanced especially in her beautifully tender song "What a Mother Does."

There's no doubt that a weak Ralphie could put a lump of coal in the whole kit and kaboodle, but Slow Burn found a gem in kid actor Michael Norman, a student at North Broward Prep, who was cast in 2018 as Ralphie in the national tour of "A Christmas Story, The Musical."

Broadway may have reinvented "A Christmas Story," but Slow Burn's musical version is pure sugar and spice.