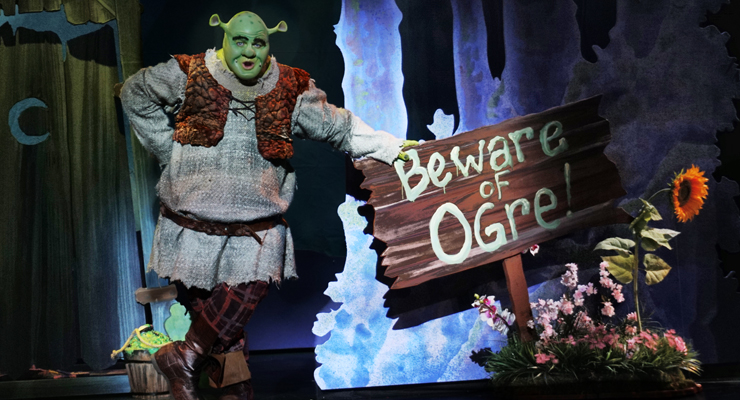 Wesley Slade as Shrek in "Shrek The Musical." Photo by Rodrigo Balfanz.

Once upon a time, there was an animated film that was turned into a Broadway musical. The movie fared better than the Broadway production, which closed in 2010 after a year on the Great White Way. "Shrek the Musical" hasn't died on the vine but has found life after Broadway in touring productions and with theater companies who dare to take on a musical that has its share of challenges.

From getting the rhythm right in a kick line of dancing rats to four people maneuvering a behemoth puppet dragon around the stage (and that's not even the half of it), creating a production of "Shrek the Musical" can't be easy. Slow Burn Theatre, kicking of its 10th anniversary season and its fifth as the resident theater company at the Broward Center for the Performing Arts, likes to take on the big, bold musical, and they've done it again.

Director-choreographer Patrick Fitzwater has a gift for mounting giant productions with large casts and a zillion moving parts and finding ways to make them work in the smaller 580-seat Amaturo Theater â shows that usually play in larger proscenium venues. His approach with this fairytale musical is an invitation to settle into a cozy lair and escape reality for a while. Overall, it works. 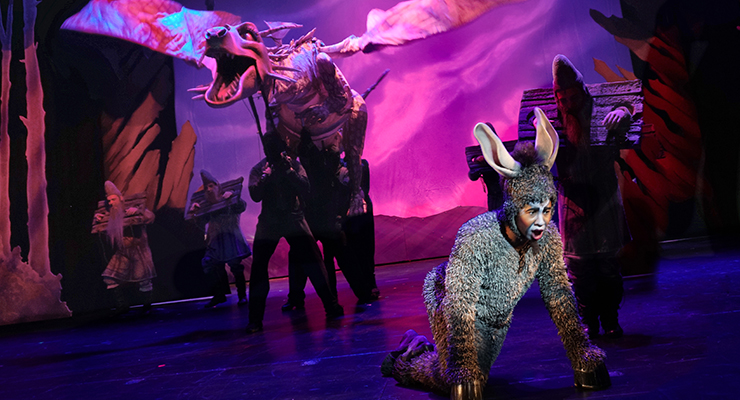 Raynel Reynaldo as Donkey in "Shrek The Musical." Photo by Rodrigo Balfanz.

With book and lyrics by David Lindsay-Abaire and music by Jeanine Tesori, the musical unfolds as an upended fairytale about a big, green ogre, Shrek (Wesley Slade) and Princess Fiona (Kimmi Johnson) who surprisingly find love and common ground to live happily ever after in a swamp.

Rounding out the characters are a loquacious donkey (Reynel Reynaldo) who tags along with Shrek on his quest for Fiona. 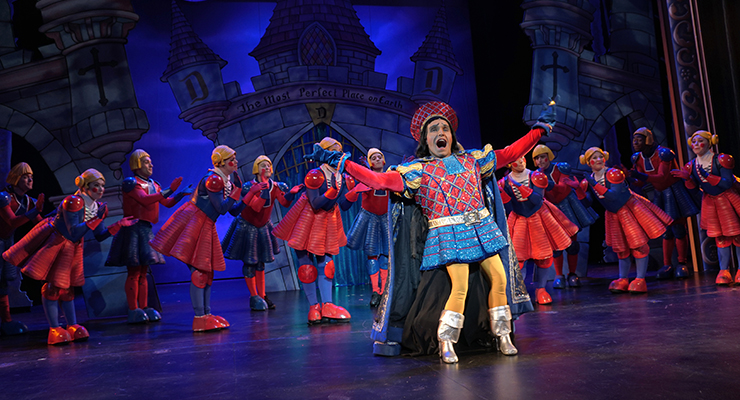 Clay Cartland as Lord Farquad, center, and citizens of Duloc in "Shrek The Musical." Photo by Rodrigo Balfanz.

The 22-member cast is so committed to the story, the audience can't help but buy into it. South Florida and Slow Burn favorite Clay Cartland hams it up to the max in just right proportions. His diminutive Lord Farquuad, the show's most ridiculed and ridiculous character, is inherently over the top, so Cartland adds the perfect dose of campiness. Add to all of it the show's requirement of physical constraints, which require the actor to perform on his knees (ouch) with tiny, dangling legs as part of the sight gag.

Slade's Shrek plays an ogre who is more mush than monster and avoids any hint of a cartoonishness. In addition to finding the sweet emotion buried in Shrek, Slade finds a way to bring that same emotion to the second act tearjerker where he admits his love for Fiona in "When Words Fail." 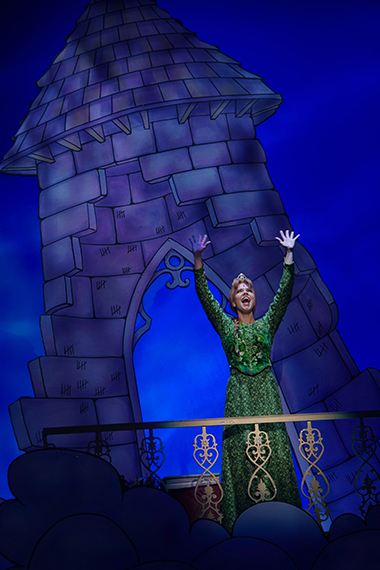 Kimmi Johnson as Princess Fiona in "Shrek The Musical." Photo by Rodrigo Balfanz.

You'll fall under the spell of Johnson's Fiona, who has become Slow Burn's go-to leading lady, having appeared in last season's Freaky Friday and "Legally Blonde the Musical." She infuses the princess with an Annie Oakley-esque feistiness and with her gift of coming timing, she shines in two of the show's highlights, "I Know It's Today," which she shares with the talented teen and young versions of herself, Miranda Ferreira as Teen Fiona and nine-year-old Ellie Rose Pulsifer as Young Fiona. Perhaps the most entertaining highlight is Slade and Johnson's perfect chemistry in the number "I Think I Got You Beat" where love begins to bloom among burps and flatulence.

Donkey in "Shrek the Musical," as the book writer decided, needs to be played limp hoofed as if he's been plucked from the script of "Priscilla: Queen of the Desert." It makes little sense, except for perhaps the musical's theme of acceptance, and doesn't seem to add much to the character. When he professes to the dragon he likes "a big, big girl," the choice by the book writer makes even less sense. Yet, Reynaldo plays it as written, finds his way, heightening the jokes, and ramping up the R&B in his solo song "Make a Move."

Were there the chance to make one wish for this Show Burn production, it would be to ditch the digitized orchestral track. No doubt the score is constructed for a large orchestra, but Slow Burn's creativity has never been limited. The canned music breaks the magical faÃ§ade that the company has so craftily created here.

The musical score isn't one of the most memorable anyway; there's nothing catchy enough that you'll be humming one of the tunes all the way out to the parking garage. The cover song at the end, Neil Diamond's tune, which pop band The Monkees made famous, "I'm a Believer," is the only one that sticks. 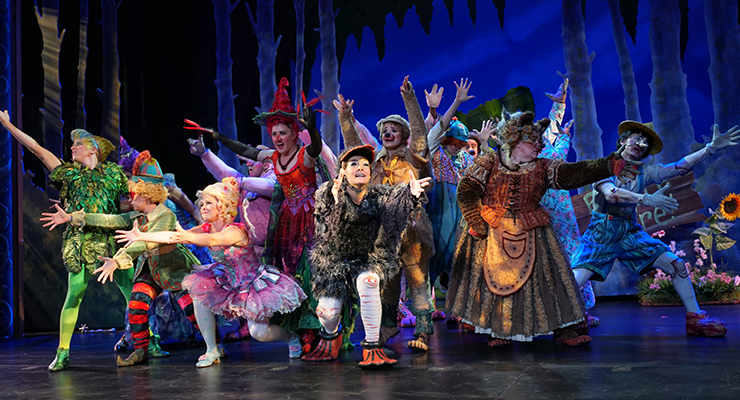 Ensemble of "Shrek The Musical." Photo by Rodrigo Balfanz.

There's much to enjoy in Slow Burn's "Shrek the Musical"; Fitzwater's choreography is always a stunner. Despite the musical's infusion here and there of adult humor, it's probably most enjoyable if you're accompanied by a youngster or two in tow. The challenge, however, might be keeping them entertained a two and a half hour running time, 20-minute intermission included.