Call it a Sunshine State of mind. An outlook on life brightened by those golden rays. As the country reels from last week's civil unrest in the nation's capital, and the possibility of more to come in the weeks ahead, many are looking to the promise of a year that's just gotten underway as motivation to embrace the positive, no matter what curve balls are thrown their way. Nihilism? Despair? Doom and gloom? They're all so 2020.

This reviewer would thus be remiss if he did not point you in the direction of two films currently available for digital rental or streaming. Their subjects? Oh, your basic litany of growing old, loneliness, marital woes, mental illness and institutionalized ostracism. Would it surprise you to learn these debut features from two South Florida filmmakers are also two of the most cheerful and creative movies available at the moment? Let's slice open these sweet and juicy Florida oranges.

âSome Kind of Heavenâ: Drivers line up their golf carts in nearly perfect formation, complemented by the faint sound of sprinklers. Synchronized swimmers channel their inner Olympian, as âLaughter in the Rainâ plays on the speakers. Women twirl batons with gusto as band players practice. And cheerleaders raise their pom-poms with unbridled enthusiasm. Youthful exuberance in spades, all displayed by the radiant retirees at The Villages. 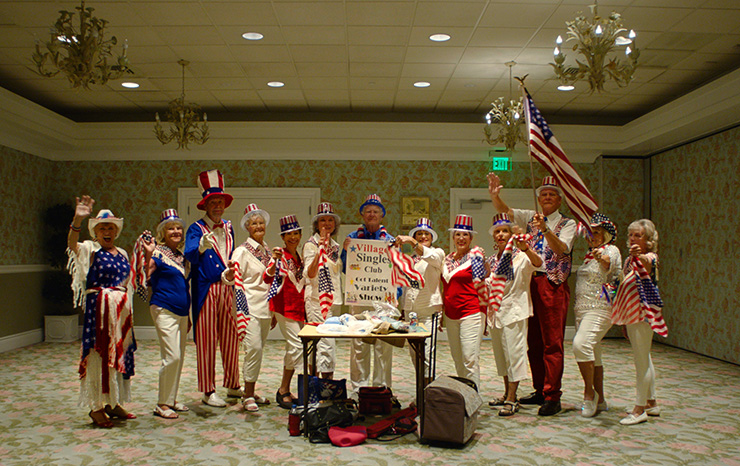 A scene from "Some Kind of Heaven." Photo courtesy of Magnolia Pictures.

America's largest retirement community is a mighty subject for a documentary, and also rife with pitfalls. Does the Central Florida location merit the hard-hitting thrust of a news exposÃ©? Or does its outlandish landscapes, âCocoonâ by way of âEdward Scissorhands,â deserve snark turned up to 11?

Lance Oppenheim chooses none of the above. His movie, shot in the boxy 4:3 aspect ratio is of a gentle demeanor, lyrical and folksy, though not averse to the occasional playful jab at the subjects' expense. However, he's not looking down on these residents of a certain age. When they're opening up about the problems they're facing, the Broward County native is a consummate listener. But when he inserts a visual gag, it's clear he's laughing with his subjects, not at them, and that generosity of spirit makes all the difference.

Oppenheim focuses on four people, each experiencing their own trials and tribulations. Anne and Reggie Kincer are reaching an impasse as they approach their 47th wedding anniversary. She wants the man she married, but the man she married is undergoing a transformation of sorts, a reawakening, partly triggered by senility, that might bring fulfillment to him but makes her feel like she's babysitting an overgrown adolescent on a New Age kick. Things become even dicier for the couple after Reggie, who resembles âFargoâ actor Harve Presnell, gets in trouble with the cops. A court hearing at the halfway point is alone worth the price of admission. 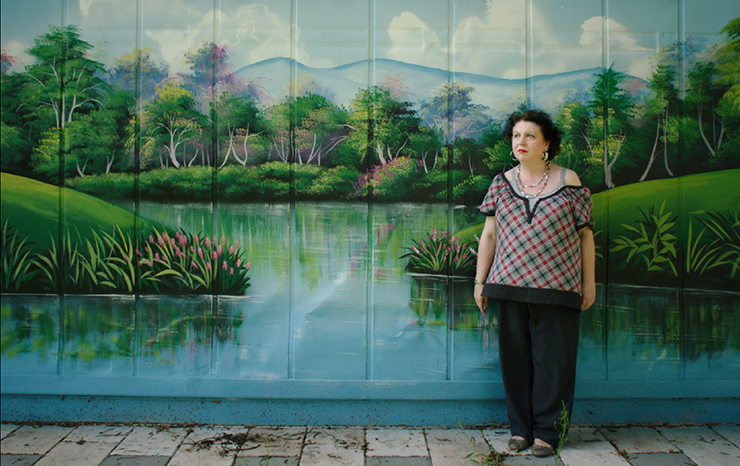 Barbara Lochiatto in "Some Kind of Heaven." Photo courtesy of Magnolia Pictures.

But at least the Kincers have each other. Such is not the case with Massachusetts transplant Barbara Lochiatto, who moved with her husband envisioning a golden end to their golden years. Then he died, leading her to find full-time work. She's stuck in the bubble its jolly residents don't want to leave, a widowed pencil pusher working 9 to 5 while she watches others partake of the pleasures in this âDisneyland for Retirees.â

And then there is Dennis Dean, a gray-haired California boy on the hunt for a wealthy lady who will solve his mounting money troubles. A strapping 81-year-old, his actual residence is his blue Club Wagon, but let's keep that on the QT. Like so many people who move to Florida, handsome Dean has a past (God love him, he still uses a flip phone), and the way Oppenheim peels back the layers gives his story added urgency. 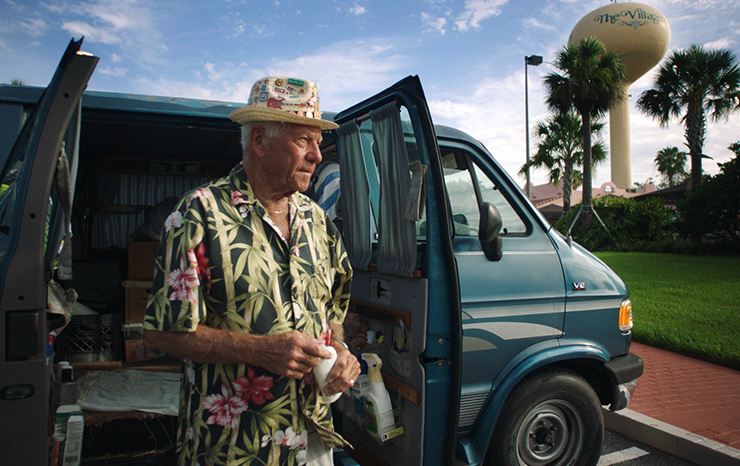 Dennis Dean in "Some Kind of Heaven." Photo courtesy of Magnolia Pictures.

At 83 minutes, there are no dead spots in âSome Kind of Heaven.â It unfolds with easygoing precision. For a film that relies so much on its immaculately framed tableaux (one striking image after another by cinematographer David Bolen), it's surprising that what stands out is the director's economy of storytelling. Oppenheim, who turns 25 later this month, wears his influences on his sleeve, as young filmmakers are wont to do, but even as he channels the early work of Errol Morris and the cheeky insouciance of the late Andy Sweet, he displays the instincts of somebody twice his age. (As I mentioned in my year-end wrapup, in several key ways, âHeavenâ is the movie that âThe Last Resort,â another Florida-made documentary about a retirement community, should have been.) That energetic vitality driving this sun-dappled valentine to Florida is Oppenheim's own. He's made a honey of a movie.

âFor My Sisterâ: Think of women's pictures. Films that focus on their identities, their struggles, as they interact with others who mean the most to them, be they a mother, sibling or close friend. They're the province of George Cukor, Douglas Sirk, Rainer Werner Fassbinder and, of course, Pedro AlmodÃ³var. Now imagine someone giving this material a sci-fi twist, on a shoestring budget. Director Gabriel Rhenals' DIY panache has yielded an odd hybrid that wears its intrinsic weirdness like a badge of honor. He has a Kafkaesque odyssey that's also a kitchen-sink drama and a dissection of bureaucratic groupthink, structured like a that's-so-Miami âAlice in Wonderland.â 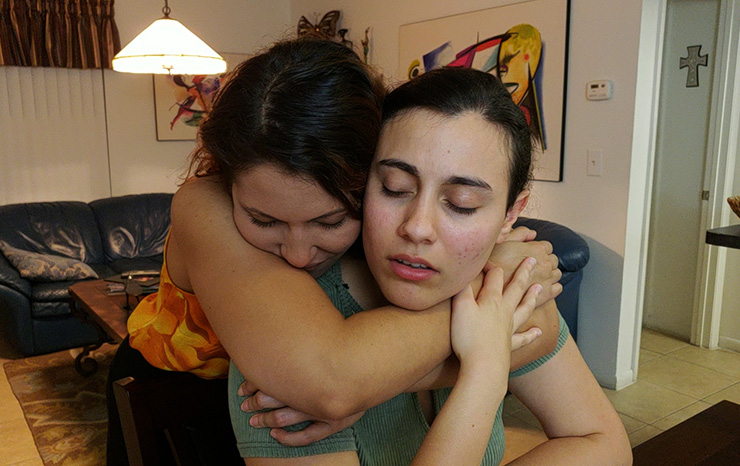 Stephanie Maltez and Cristina De Fatima in "For My Sister." Photo courtesy of Gabriel Rhenals.

It's a strange mÃ©lange Rhenals has cooked up, and yet the darn thing works, thanks to his go-for-broke boldness and skewed worldview. The central conceit, a company that has mastered time travel through the use of microscopic drones, winds up being one of its least interesting aspects. Like a found footage film, what we're seeing is an assembly cut taken from the drones' cameras, which provides a justification for close wide-angle shots, like in âThe Truman Show,â and almost makes us forget this was all shot with a Samsung Galaxy S9+.

The story centers around Evie (Stephanie Maltez), who discovers to her dismay that her baby sis Tris (Cristina De Fatima), a college student who wants to be a journalist, is suffering from depression and refuses medical treatment. How come? This is where the film's deep-seated paranoia kicks into gear. In this alternate South Florida, a mental-illness diagnosis is a kiss of death, both socially and professionally. Evie, who lost her mother for this very reason, takes it upon herself to navigate quite the minefield in order to prevent Tris from suffering the same fate. 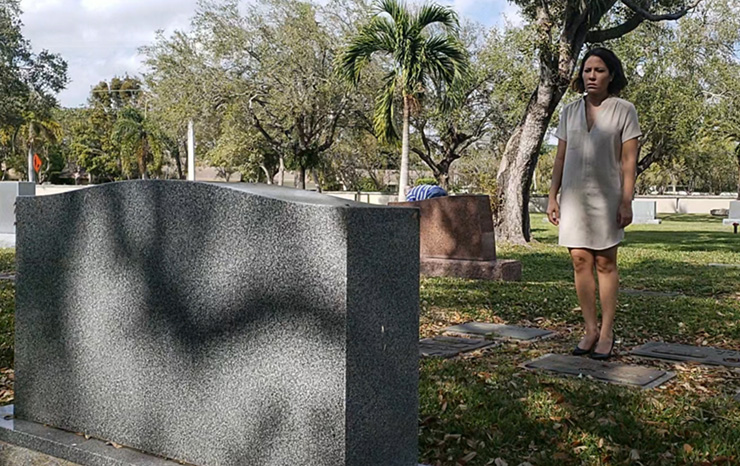 Stephanie Maltez in "For My Sister." Photo courtesy of Gabriel Rhenals.

Much easier said than done. In paper, Evie's selfless journey to bring her sister back from the gaping void sounds sobering and grave, the indie version of a beloved series' Very Special Episode, if you will. But that's not the way Rhenals rolls. He peppers his film with kooky small roles that keep things intriguingly off-kilter. Take, for instance, the alternative medicine practitioner who looks and acts like the dullest accountant, or the black market antidepressant pusher who behaves like a creepy bro. They're on screen for about a minute, then they vanish into the ether. 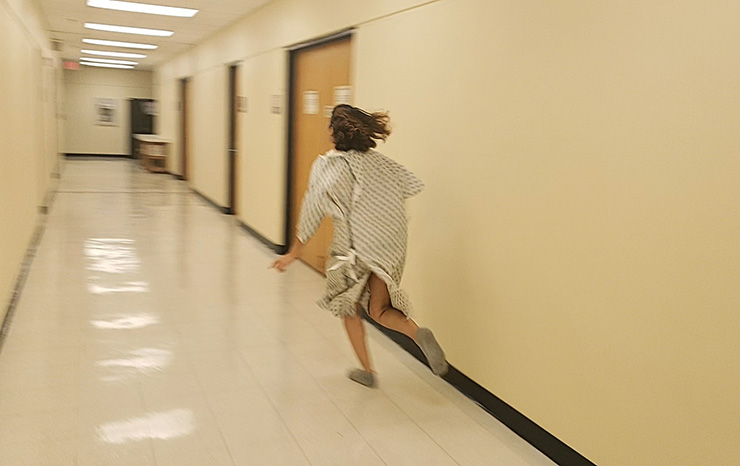 Stephanie Maltez in "For My Sister." Photo courtesy of Gabriel Rhenals.

The lengths people will go to avoid having that dark blemish on their record takes âFor My Sisterâ to adsurdist extremes, to the extent that parts of it play like a tall tale. It's the farthest thing removed from a social issue film, and that's why its portrayal of the emotional toll that comes from caring for someone with depression resonates so strongly. Rhenals' genre splicing pays off in dividends. He's made a message movie that feels like nothing of the sort. His nerdy eccentricities are a breath of fresh air.

âSome Kind of Heavenâ made its world premiere at the 2020 Sundance Film Festival and was part of the lineup at last year's Miami Film Festival. It is now playing in theaters across South Florida, including CMX Cinemas in Miami Lakes, the Cobb at Dolphin Mall and the Paragon Theaters â Ridge in Davie. It is also available on virtual cinemas, including Coral Gables Art Cinema and O Cinema, as well as Video on Demand platforms. âFor My Sisterâ had several public screenings after premiering in 2019 and is now available to stream on Amazon Prime. 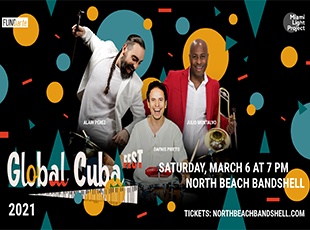 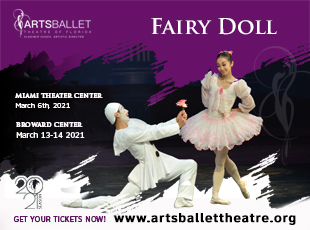