There's a full-time children's theater group inside the Miami Children's Museum, aptly called the Miami Children's Museum's Theater Troupe. If you've visited the museum in Watson Island Park, 980 MacArthur Causeway, Miami, perhaps you've seen them. The shows are included as part of your museum admission. But if Bree-Anna Obst, who has been the manager of theatrical experiences for the troupe since 2016, would like to see the children's theater become the reason people visit the museum; not just something they've stumbled upon or an add on to all the other offerings at the museum. 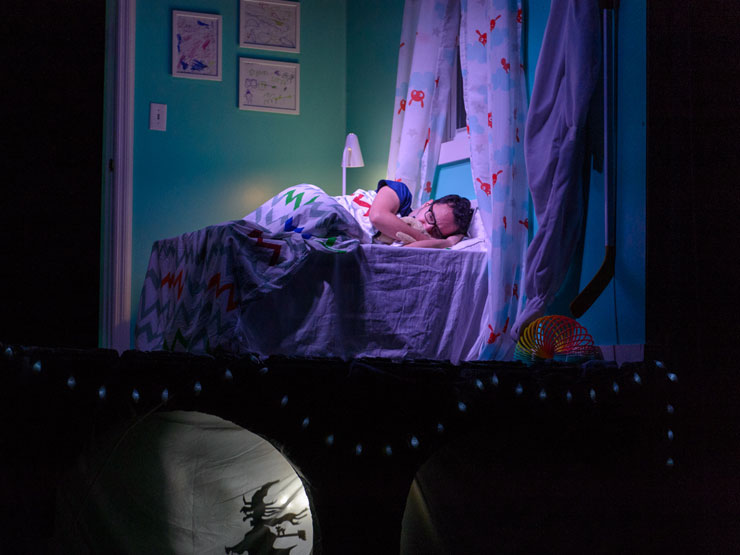 Many South Florida residents may not be aware that there's a full time, professional theater troupe at the museum. I have to say that they came to my attention and many in the theater community when they were presented with a Remy Award by the South Florida Theatre League in August 2019 for Outstanding Contribution to Children's Theatre.

miamiartzine.com wanted to find out more about the troupe and talk about their latest, original show "The Monsters Under My Bed." Here's a conversation with Bree-Anna Obst.

miamiartzine.com: How did the troupe get its start? And how long has it been in existence.

Bree Anna Obst: So it started off small about seven years ago. One of the current troupe members, Peter Kisiluk, worked at the museum and he had a theater background, so there were characters that would be around the museum and smaller theatrical interactions done. And then slowly it grew into doing shows. I took over the department three or so years ago. From there it has really grown into its own entity within the museum. We are at the point where the work has built up to a quality where it's time to get the word out. Often people don't know we have the shows here, but once people discover us, we have frequent visitors that come each week to make sure they see the show. Often, they say it's the highlight of their visit. 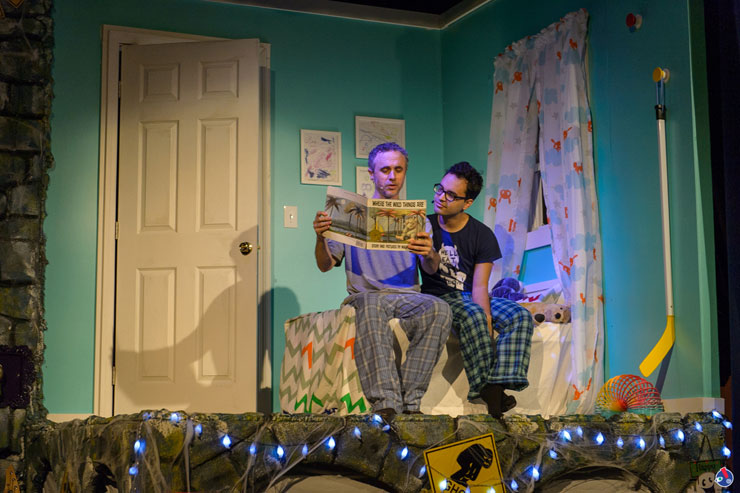 maz: How many shows do you do?

BAO: The schedule is packed. We're very big into Halloween so this next couple of weeks is jam packed with shows. During the rest of the year, we do four shows a weekend, two on Saturday and two on Sunday. That's the regular schedule. Once a month, we'll do a show on a Friday evening. We have sensory and family friendly shows every second Saturday of the month. I guess it's easiest to say that we have shows every weekend.

maz: Tell me about the Halloween show.

BAO:Â  "Monsters Under the Bed" is is about a kid named Max. Every night at 3 a.m., shrieking and wailing sounds come from underneath seven-year-old Max's bed. Thatâs because a monster, a witch, and a pair of pale green pants with nobody inside them live under there. The trio is determined to capture Max. 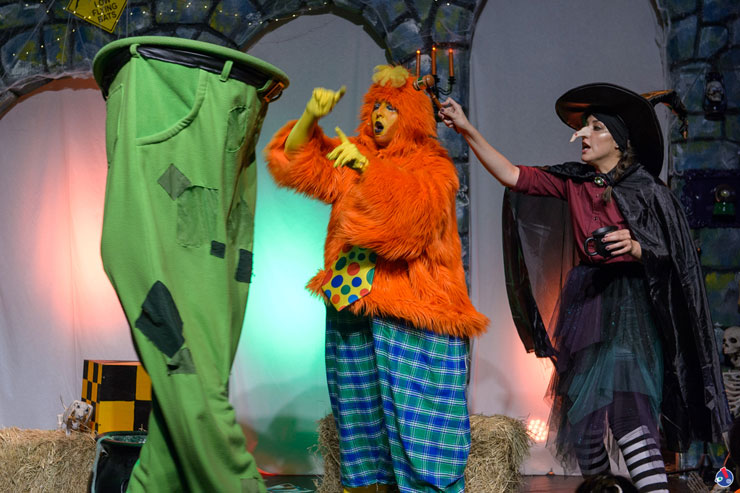 maz: You have sensory-friendly performances for patrons with sensory sensitivities and other special needs. Can you explain what differences you put into place from your other performances?

BAO: We do something that's called "softening the edges," besides keeping the house lights up and lowering our sound levels. The softer edges are that loud screams or startles are either taken our or done to a lesser extent. Lighting effects may be a bit different, such as a strobe light that's used in our other performances, is perhaps removed.

We also introduce ourselves as the actors and tell the audience all of the characters we play and show them the costumes of, say, a monster or witch. We tell them it looks scary, but the actors explain it is pretend and that they are inside the costume. The audience appreciates that and knows what to expect. We do a few little tweaks here and there. We also don't make children who are unable to sit still sit still. If they feel like they need to walk around or the grown ups in the room see that a child is overwhelmed, we have a space on the side where there's a place to walk, or there's a quiet space in the museum and there's access to that. 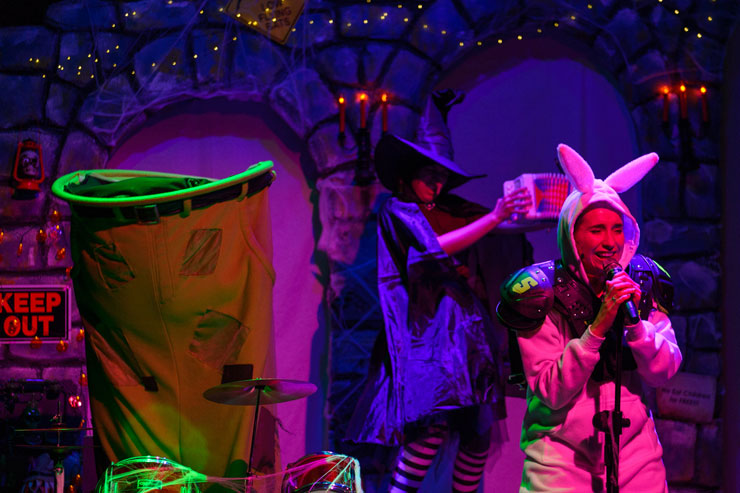 maz: I know you want to expand that accessibility to other in-need audiences.

BAO: I am hoping to have our shows signed for a deaf audience, and I would like it to be captioned as well. We don't have that yet, but it is something we are working on. 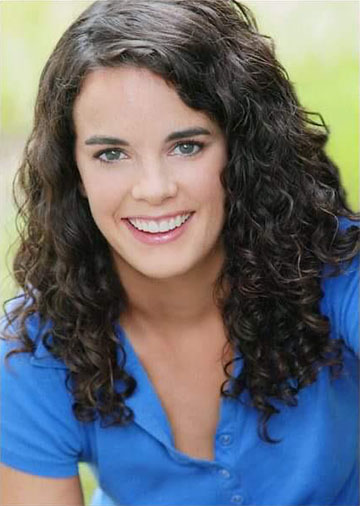 maz: Does the troupe perform just at the museum?

BAO: We have a huge outreach program, so we go out to a lot of pre-schools and camps. Currently, we are working with nine different schools for kids with disabilities.

We visit them five times throughout the school year and they come to the museum, too.

We've had two grant programs we've been doing for the past five years. There are 15 different shows that people can pick from and that we can take those out into the community. Even at the moment, we are working on going to some of the more under-served schools in downtown Miami and we are working with the Chapman Partnership, a homeless shelter next month.

maz: How did you get involved in children's theater?

maz: Have you instituted some of the things you learned with Polyglot in the way you create shows at MCMTT?

BAO: It's important that we expose kids to the performing arts either here or in the museum or in the community. It's so important for kids to see a play, to see pretend, to see the stories. We've used kids to help create our shows. We have a charter school and a pre-school inside the museum, so we'll get ideas from them. A group of adults sitting around a desk don't always have the same ideas as a group of kids, so we do use children to help us come up with parts of the work. Polyglot would do these Playspaces pieces in outdoor spaces, for instance. Like filling an outdoor space with 5,000 cardboard boxes and then have kids build a city. 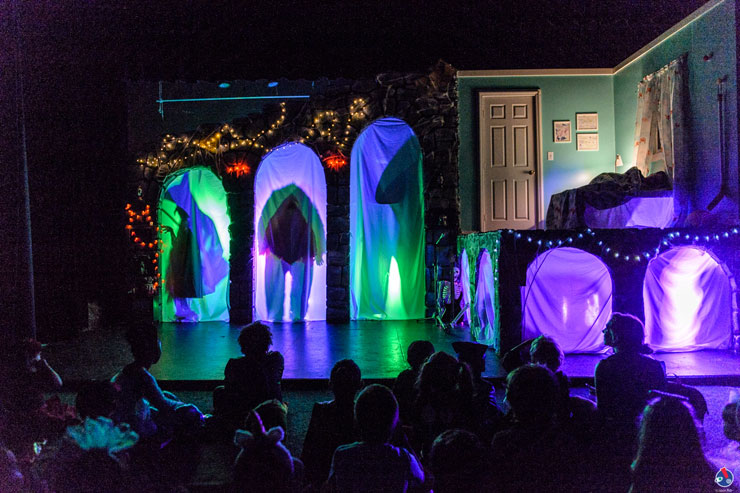 maz:Â Are the shows created by MCMTT all original and do you create your own costumes and sets?

BAO: Everything we create is original work or storybook adaptations. We write, we direct, we write music, we do our own lighting, sometimes we outsource set design. We do a lot of building and painting ourselves. One of the beauties of being in the museum is we have studio artists here. They have helped with costume design and costume making. If we need help with construction, we have an exhibit team. 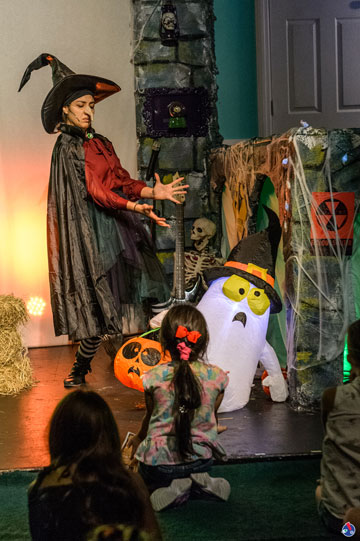 maz: Do you have specific core members in your troupe or do you use different actors?

BAO: We have seven of us that are core team members, two of us are full time and five are part times. And, when we need to, we hire other performers. It is a whole team of working actors and a lot of them will say "I'm a better actor for having worked at the museum." We are constantly creating. We're always creating, so one show is never the same in the real sense of it. The actors have to learn all of the parts because of different scheduling, so there will be days when you have a different person playing opposite you, or you are playing a different character.

maz: What's the next show?

BAO: We have another that we are doing in November. It is one that we are bringing back from our repertoire. Mostly, our news shows are based on whatever exhibit is coming to the museum. So when the gallery changes, that's usually what will be the springboard for the idea. In a year we can create anywhere from two to four new shows. The next exhibit coming is "Daniel Tiger's Neighborhood." We love it when we get an exhibit that has characters, but since we don't have the rights to recreate Daniel Tiger, we'll find core themes and do our own thing. We always want to do something different, but something that, of course, supports the material presented in the exhibit. 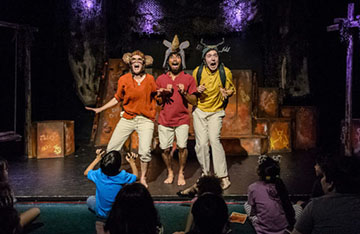 maz: Do other museums around the country have full time theater troupes that you know of?

BAO: Some have theater troupes, but it is a novelty and a rarity to have a full time troupe working and creating all the time. Other children's museums will get rights to shows and do a season of a run of a show. But we're all original. As we've grown bigger, the museum sees the value in the theater company, so they are so supportive. The team is written into the museum grants, they'll use us at the big events or facility rentals with an extra show or a character. As a team, we have become the faces of the museum. Yes, it's definitely rare to have such an investment in a theater team in a children's museum.Â 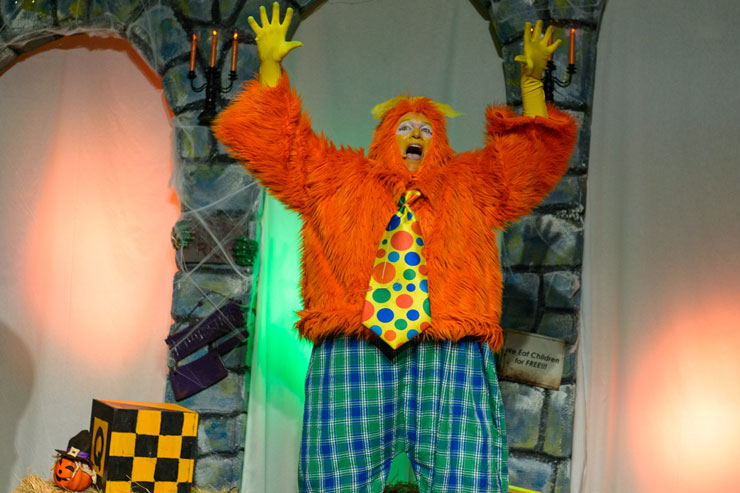 "Monsters Under the Bed"