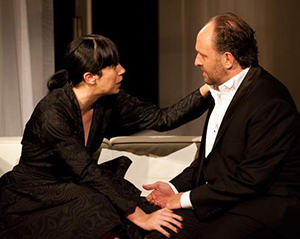 Henrik Ibsen's classic Hedda Gabler is a steamy piece about a bad girl, husbands, lovers and pistols. And sex. Of course.

Miami Theater Center's adaptation of Hedda has all the above, but lacks one small, additional item. Soul.

It's a pretty presentation; the audience sits on stage facing the framework of a large white two storied house, the whole surrounded by white, semi-transparent drapes. Sparse furnishings inside with glass and chrome prominent. The music and lighting, although well done, telegraph every rise and fall in the action. We have been warned. And that's where things start to come apart. This version of Hedda Gabler is all about, "Look how clever and different we can be." Â All the drama is in the presentation. The set, the lights, the music, all hammer home the obvious.

Hedda, played by Jessica Farr, seems to be locked in a bad silent movie. The exaggerated poses, the knowing stares at the audience, the silences. I'm guessing this is the director's choice. It does the actress no favors.

Even the excellence of Gregg Weiner as Hedda's husband George Tesman and Paul Tei as her sometime lover Eilert Lovberg cannot bring life to the prosaic dialogue and direction. The others in the cast, Diana Garle as Thea Elvsted who's left her husband, John Dennison as Judge Brack who leches after Hedda, Kate Young as Juliana Tesman, George's aunt and Kitt Marsh as Berta, the maid, all these actors fare no better.

There's no pleasure to be had from ripping a play. One leaves the theater disappointed. The buildup to this Hedda Gabler has been large, the rehearsal period lengthy, the mounting exquisite at times, but ultimately the lack of true emotion negates all these artistic efforts.