A Violin Like Hot Sauce, It Goes with Anything

Violin virtuoso Lucia Micarelli appeared with her spectacular band on Friday, Sept. 28, at the Parker Playhouse in Fort Lauderdale.

Growing up in Queens, Micarelli is a prodigy of Italian and Korean heritage who, at the age of three, picked up a violin and hasn't stopped pushing its limits. Limits? What limits?

The young Micarelli was sheltered from most genres of music â classical repertoire for violin was her musical lens until she was 17. Then, after attending Juilliard, she entered the Manhattan School of Music where she was turned onto music that wasn't âwritten down,â but was improvised; she listened to Miles Davis, Coltrane, Pink Floyd, Jethro Tull and consequently changed her artistic choices, now mixing it up with the likes of Ravel, Gershwin, Davis, Zeppelin, Queen, some old fashion foot-stompin' fiddle, and...and...besides being a bravura violinist, she sings! 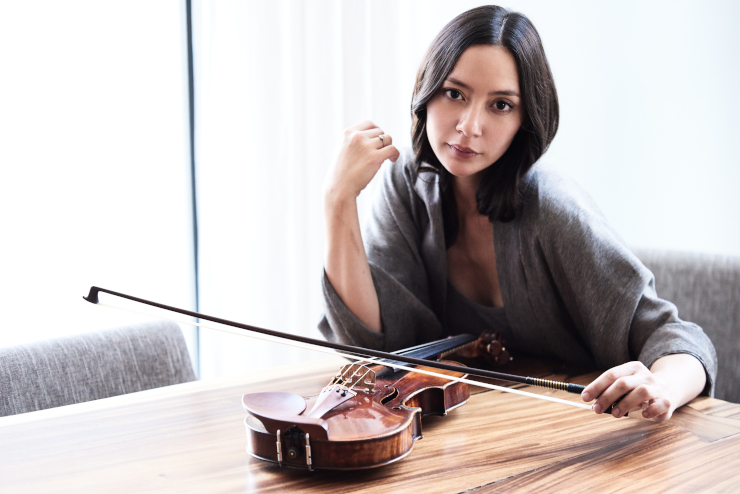 After winning the role of street musician Annie Talarico (classically trained, working for tips) in HBO's TV series "Treme," about life in New Orleans after Hurricane Katrina, Micarelli was exposed to the vibrant New Orleans tuneful scene and ended up with, in her words, âa huge appetite for all kinds of other music.â She has become musically omnivorous, balancing technique and collaboration.

âIf you've been trained to listen to mistakes your whole life, you forget to listen to opportunities.â Micarelli illuminated the âmental shiftâ one has to make from the precision required to execute classical music to the more collaborative approach of other genres,where the tunes are more like having a âconversation with people,â leaning towards rhythm and a âgroove.â

Now in her mid-30s, Micarelli programs her shows with eclectic sensibilities, sharing her classical repertoire as well as the music she has grown to love. 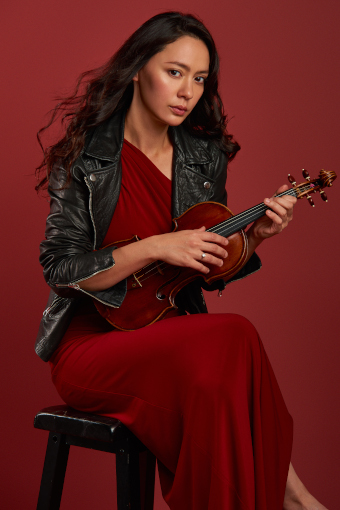 These transformative musicians empowered Micarelli to take her audience on an omni-directional musical ride. This is a good thing, as she knows that people's playlists these days are varied. Since most of her fans know her from her work outside the cough-free-zones of classical, she took the opportunity to give her audience a taste of the conventional bent while ramping up the musical landscape with standards, jazz, rock and folk tunes.

It is abundantly apparent that Micarelli is an accomplished violinist possessing fierce technical skills that are only exceeded by her passion for playing. The lissome brunette cuts a cool silhouette in bare feet with a long black dress, often while performing with one foot flat on the stage while the other foot is arched upward balanced on her big toe, looking as if she might take off at any moment. Certainly her playing did.

Micarelli immediately captured the imagination of her audience with the opening phrases of Estonian composer Arvo Part's âFratres,â a mounting flurry of frenzied notes that morphed into the exquisite âGabriel's Oboe,â the main theme from the film The Mission; Freebairn-Smith and Micarelli sweetly rendering the sublime motif that ended with a prayer.

Exploiting her stunning command of her instrument, Micarelli dazzled the crowd with Saint-Saens's lively Introduction & Rondo Capriccioso, tonal richness, flawless ascending runs and double stops igniting her fans. The first movement of Corigliano's Sonata for Violin and Piano was another crowd-pleaser, both melodic and dissonant. Thies's nimble fingers and Micarelli's leaps displayed how classical music can be a contact sport.

The classically trained Thies's possesses considerable classical and jazz chops, making him a force of nature in either genre.

Micarelli and Freebairn-Smith teamed up for the second movement of the Ravel Sonata for Violin and Cello, where they traded licks with the driving dissonant theme, fiercely in sync with the twists and turns at every measure.

The string quintet rendered Barber's âAdagio for Stringsâ with the required sensitivity,the amplified instruments bringing a rare gravity to the familiar piece, intensifying the pathos where, at the pause immediately following the peak of the crescendo, I heard a gasp from the audience.

Jazz standards were a major part of the evening's set. Micarelli's violin took up the vocal line on Gershwin's âSomeone to Watch Over Me,â giving it a pleasant old-timey spin. A lesser known jazz standard by Tommy Wolf, âSpring Can Really Hang You Up the Mostâ (a jazzy take on the opening line of T.S. Eliot's âThe Waste Landâ) became a duet between Thies and Micarelli, the violin handling the vocal line with a 50s vibe and the piano swinging it in the center with a cool hot hand.

It was David Simon, one of the creators of Treme, who not only gave Micarelli the chance to play music outside her comfort zone, but also coaxed her into singing, where she discovered she could.

Micarelli possesses an edgy mezzo with authentic, rounded tones. She sang Steve Earle's Grammy and Primetime Emmy nominated âThis Cityâ with a lingering sensibility that was a perfect fit for the song, Freebairn-Smith supplying the haunting harmonies. Bass, piano and guitar backed Micarelli on a soulful âTime After Time,â her dad's favorite tune, which she sang with a full heart, Amuedo contributing a sweet guitar solo, then teaming up again with her for a sensual take on the Nat Cole standard, "Nature Boy.â 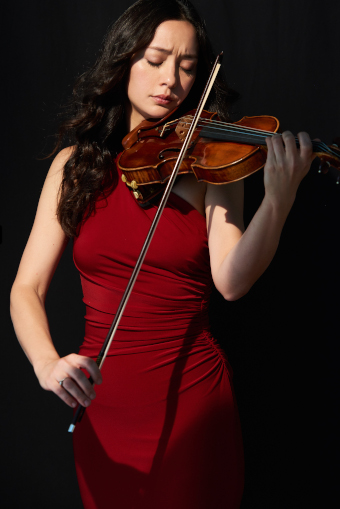 The versatility continued with âLadies Fancy,â an old-time fiddle tune, Hammond and Dellinger flanking Micarelli as they tore up the room. The band's angle on "Will o' the Wisp" from Miles Davis's Sketches of Spain, featured the crisp and layered work of Amuedo, the languid violins and cello hypnotic and seductive, suggesting something elusive. A Danish folk song âOld Reinlenderâ revved things up, Freebairn-Smith and Walker going col legno (striking their strings with the side of their bows), lifting the peppy tune while Hammond and Micarelli launched into a fevered duet.

âTzigane,â which Micarelli classified as âgypsy jazz,â proved again that the violin, like eggs and potatoes, can be served up in so many ways! She dramatically exploited the lower range of her instrument with snappy arpeggios that streaked upward, angling for a race to the end, while Thies tracked her every step of the way.

Dellinger, who arranged most of this evening's songs, traded in his viola for a banjo to accompany Micarelli with a final message: â'Hard Times' come again no more.â

This was an evening of musical enlightenment by a gifted ensemble, facilitated by a joyful sprite who lacked all pretense, making an uncommon connection with the audience. Micarelli was full of appreciation and love for the crowd and the stagehands, expressing how it was a privilege to play this music and share it with us. Indeed, she reminded us that "the greatest thing you'll ever learn is just to love and be loved in return." 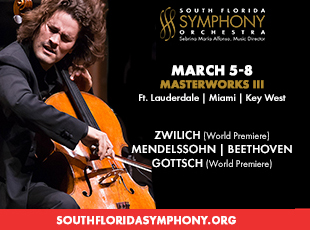 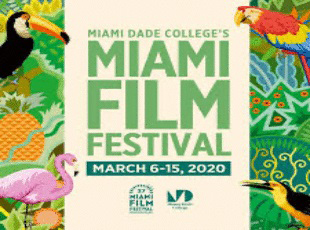