'Art of the Hollywood Backdrop' Paints a Mood in Boca 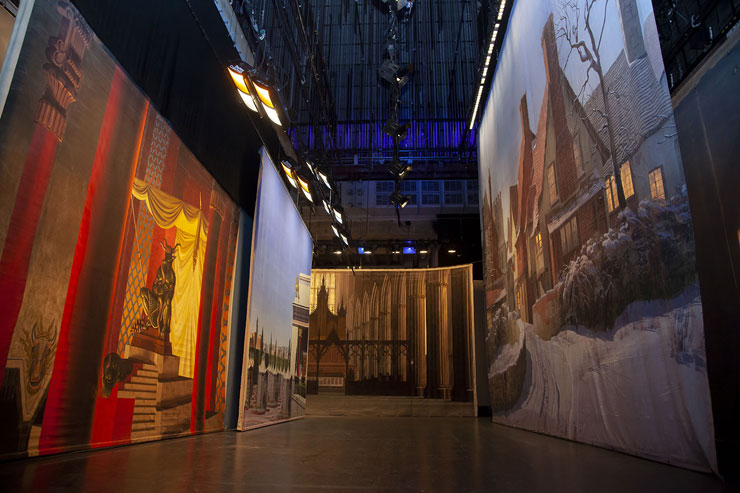 Youâre going to like this oneâ¦whimsical, iconic, a grand illusion. I recently took in the latest exhibition at the Boca Raton Museum of Art. If this museum is not on your regular rotation, change that. I know, I know, itâs a hike up there from our usual stomping grounds.

Boca is perhaps not your cup of tea, kombucha, espressoâ¦whatever; but you might want a rethink. Their well-executed exhibitions grab my imagination time after time, year upon year.

The current show, titled the "Art of the Hollywood Backdrop," is a comprehensive overview of the special niche talent of a group of artists in the Hollywood movie industry, never before given their due. Twenty-two scenic backdrops made between 1938 and 1968 are on view and, believe it or not, they are some of the largest pieces ever painted. The Boca Raton Museumâs generous main rooms are able to display the works in their entirety.

Background on backdrops: These pieces from major movies were rescued from studio lots by a group of Hollywood insiders who formed the Backdrop Recovery Project. Thomas A.Walsh, president of Art Directors Guild Archives, initiated the Project with the J.C. Backing Corporation (headed by Lynne Coakley) and instrumental in the company purchasing 2000 backdrops from MGM in the 1970s. University of Texas (Austin) received a lion's share of the backdrop paintings.

The Assistant Professor of Practice and Associate Director of Texas Performing Arts Fabrication Studios, Karen L. Maness, picked up the ball, using them to inspire high-realism scenic paintings in their students. A "CBS Sunday Morning" program segment on these specific backdrops ultimately led to the Boca Raton Museum headlining an integral moment in art and entertainment history.

Exhibition co-curators Walsh and Maness, along with Coakley and Boca Raton Museum Director Irvin Lippman, worked tirelessly to bring this exhibition to our attention. When confronted with the new show it occurred to me that I knew nothingâ¦nothing about this art formâ¦never gave it a morsel of thought. Now Iâm brimming over with questions. 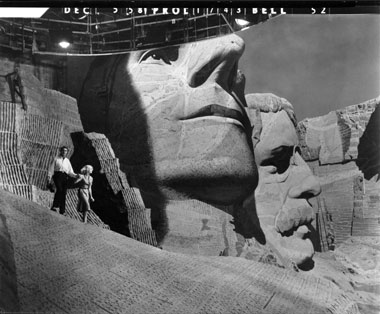 The word Backdrop makes me think of a minor factor, a secondary element; but, without strong support, things fall over, have little meaning.

Spinning through the exhibition of, quite literally, wall-to-wall painted backdrops from main movies of both my childhood and my parents' generation, I quickly came to realize backdrops provide most of the pertinent information of a scene, whether we actively absorb this fact or it seeps in subconsciously.

Backdrops add tone, setting, moodâ¦often time of day, weather, and location or season. It forms the viewers emotion, a sense of calm or foreboding, of loneliness or jubilanceâ¦by the hues, shadows, and sheer amount of visual information.

Exhibition co-curators Thomas Walsh and Karen Maness walked us around, answering copious questions as curiosity built up with each overwhelming piece, recognizable from various popular films of the era: "North by Northwest," "Singinâ in the Rain," "The Sound of Music," etc.

Facts gleaned from Walsh and Maness during the tour:

A backdrop superstar of the time was a Scottish immigrant and itinerant artist named George Gibson, who began as a day-hire in 1934 at MGMâs special effects department. He eventually became head of the scenic paint department, filling it with both seasoned and newbie artists.

I noted that there was nary a woman artist among these stables. A sign of the time, though I was informed that by the late â60âs/early70s men were comfortable to have a woman or two join them and round out the post workday cocktail scene. (Okay. Progress tiptoes in on tiny little feet.) The women brought another dimension to the work. 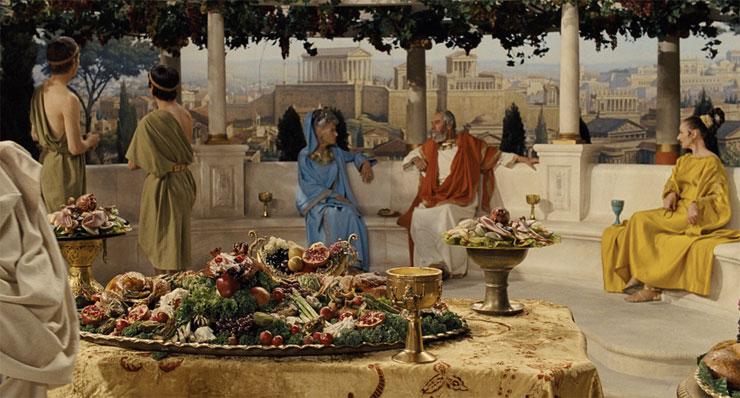 I came to appreciate the enormous talent and attention to detail by artists relegated to unheralded studio employees. Videos in front of most exhibits show the movie scene where the wall paintings appear. The stories behind each story will hold your hand down Memory Lane. Exhibits of tools of the trade are peppered throughout the Boca Raton Museum to give a sense of their daily working environment.

Many of the backdrops were not saved. During the "Wizard of Oz "for example, and up until 1938 they would simply paint on the stage wall, then paint over them for the next scene, the next movie. âThey had no sense of legacyâ Walsh explained. âEverything was a businessâ. âThe wall was more valuable than the painting.â Maness added. Most of the backdrops are on âan older manufactured very tight weave heavy muslin cloth coated with cornstarch to even out and fill the pores.â shared Walsh.

What type of paint? I asked:

âA glycerin product as the binder with a dry pigment mixed in, sort of like making a gouacheâ¦very durable, very flexibleâ¦with time it gets dryer. Fortunately they were stored in a reasonable environment.â Walsh knew his topic: âI started as scenic artist and apprenticed with some of these guys.â (It was durable but often toxic material.)

Maness suggested we visit the CBS video and the Boca Raton Museum website plus the Texas Performing Arts Hollywood Backdrop Collection at the University of Texas site which also has videos. This website will be expanding throughout the year. Maness has a beautiful book out on the "Art of the Hollywood Backdrop", available at the museum store.

As the world spirals off its axis, we find ourselves in need of a brief respite before absorbing one more bone shattering fact. This is the cleanse for you. The Boca Raton Museum has been my go-to over the years for well thought out, relatable subjects, historically and visually relevant. Another genre is preserved before disappearing into the dust of memory.

Get over your fear of I-95 for the dayâ¦take a jaunt to the Boca Raton Museum. Have lunch at Mizner Park (the museum is at the end of Mizner Park shopping street). Parking is easy. Miamians should find that fact heart-stoppingly exciting before they even get out of their cars.

Enthusiastic museum-goers right through to remote controlled TV movie buffs will learn from, and be entertained by, "The Art of the Hollywood Backdrop." 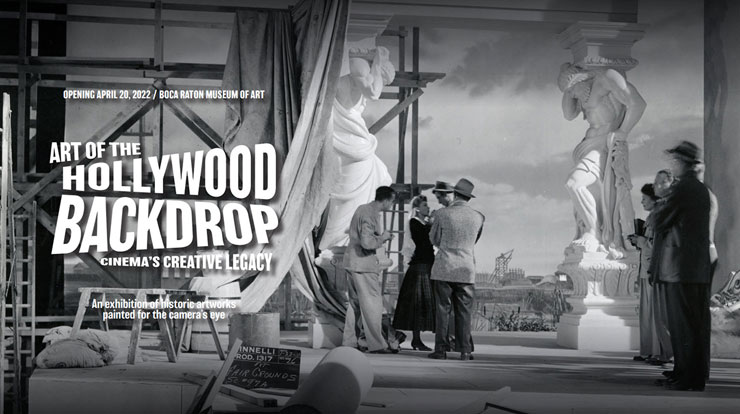