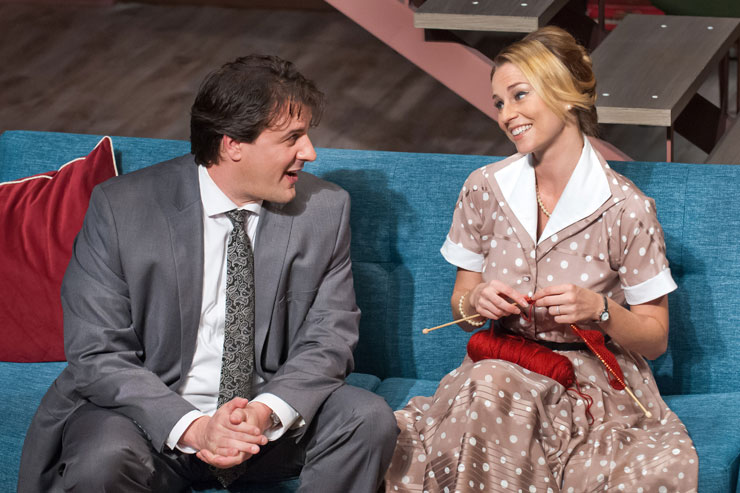 With his wife and child off to the shore for the summer, seven-years married Richard has the New York apartment all to himself. Yet this newfound freedom starts nagging at his restlessness from the very start.

Such is the plight of Richard Sherman, a New York publisher, in George Axelrodâs 1950 comedy âThe Seven Year Itch.â Most likely, whatâs more familiar to the masses is the 1955 film directed by Billy Wilder and starring Marilyn Monroe. The film reached iconic status in movie history for a scene in which Monroe stood on a subway grate in New York City wearing a little white dress that twirled up from the breeze sent from below.

Director Stephanie Ansin has created a mash-up of both the stage play and the film in a very original, witty and imaginative âThe Seven Year Itchâ at the Miami Theater Center.

Itâs a night filled with clever nods to Monroe, the nostalgia of the '50s, and a reverence of sorts to author Axelrod, who also wrote and was nominated for an Academy Award for the 1961 screenplay for Truman Capoteâs "Breakfast at Tiffanyâs".

These are the elements that influence Ansin and her co-adapter Fernando Calzadilla who embrace the time period with some subtle (and some not so subtle) touches that create a supremely unique production. 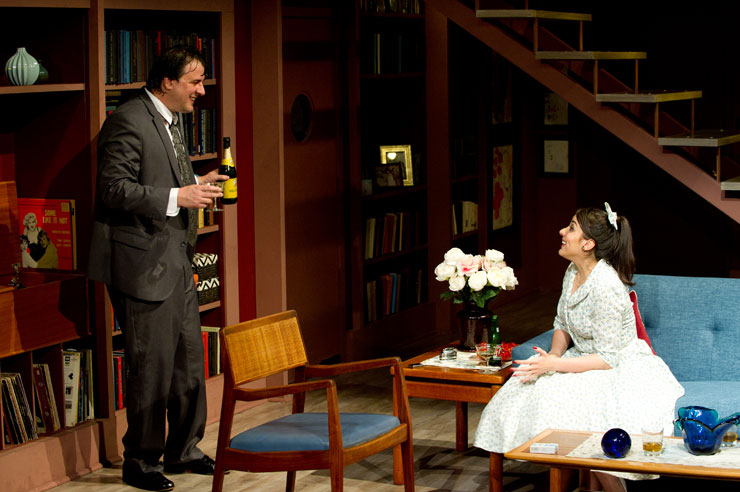 Aaron Glickman is the âwhen the catâs awayâ Richard who is given his marching orders by wife Helen (Betsy Graver) before she and daughter Sally (Shira Abergel) head off on summer holiday. Wifey-dear instructs him to not smoke cigarettes or have a drink and, yes, sheâll check in on him each night promptly at 10 oâclock to make sure "Dick" is following orders.

âSure is hard on a man when the family goes away,â he says.

Richard's life is a mix of real and fantasy and he conjures fantasies about his secretary (Jessica Farr as Miss Morris); his neighbor, who accuses him of being a peeping Tom, um, because he is (Abergel in a dual role), a strictly Spanish speaking and very tan temptress (Anaridia Burgos), and Helenâs friend, Elaine, a Mrs. Robinson type, who is limber enough to wrap Richard in a leg crunch (Linda Bernhard).

These are just the beginnings of Richardâs fantasy life playing out in a way that blurs the lines.

He ditches his "on the wagon" ways quickly and is soon swapping a 7 Up for a beer. He'll play nice and and move himself out to the terrace to listen to the ballgame. Allâs well and good until a tomato plant comes crashing down from the apartment upstairs. To assuage his neighborâs guilt for almost killing him, he invites The Girl (Diana Garle) from upstairs to his place for a drink.

Richardâs alter ego in the original presented himself as an offstage voice, but here Ansin has upped the ante and it is such a sheer delight that it would be a disservice to present the spoiler here. I will say hats off (or should I say heels off!) to James Howell as the devil on Richardâs hypothetical shoulder. Howell also doubles as the psychiatrist Dr. Brubaker, whose book Richard has been tasked with editing and spicing up. Ansin creates Brubaker as the other side of Howellâs âdevil,â putting him as a quasi voice of reason, offering Richard psychiatric advice in the guise of having him see where his fantasies are leading him. The question here to ponder -- the devil is fantasy, so is Brubaker, too?Â

Such is the mind games this "Itch" plays, and so enticingly.

Glickman's family man is frazzled, frenetic, and bumbling â sometimes channeling a bit of John Belushi. Perfectly cast, he is charged with a number of monologues and alone time on stage, seamlessly captivating the audience and showing a range of emotions. Glickman, the publisher of socialmiami.com, was an actor in Los Angeles and returned to his native Miami a decade ago. This is billed as his South Florida debut. Ansin paired him in a benefit reading of Sam Shepardâs âTrue Westâ in 2012 with Deco Driveâs Louis Aguirre at the Miami Theater Center and it is where the seeds of Richard in âItchâ was born. 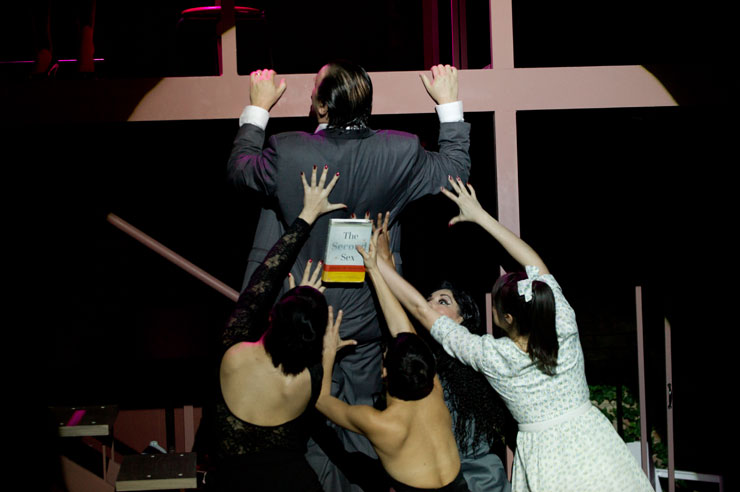 Once again, the show is presented with seating on the stage and a set similar to last seasonâs "Hedda Gabler." It is a position as a bookend to âGablerâ and to make it even more of a solid yin to last yearâs yang, Ansin changed the childâs character (Richardâs son in the play is now a daughter) in order to have the drama build as heâs ensnared in a world of females. The female protagonist in "Gabler" is trapped by men.

Garle, who was so wonderful in MTCâs "The Red Thread," plays The Girl, a 22-year-old model who is always avoiding men because they âdesperately fall in loveâ with her. Garle, with Ansinâs direction and Calzadillaâs clothes, is reminiscent of Audrey Hepburn in âBreakfast at Tiffanyâs.â Yet Garle needs to have a bit more charisma to go up against the over-animated Glickman. Their scenes seem lopsided at times because his energy is so much more amplified against her more relaxed, demure style.Â

Betsy Graver imbues Helen with just the right amount of June Cleaver; that is until she turns the tables as a would-be killer. Chaz Mena plays Richardâs nemesis Tom McKenzie with an alpha male bravado.

Calzadillaâs set, with its stairs that go nowhere and â50s interior, is a real charmer and creates a pop culture surrounding complete with period atmospheric (check out the table lighter Richard uses). The intimate staging allows for the audience to get inside Richardâs head. Voice and movement director is Luckner âLuckyâ Bruno, Jr. Luciano Stazzone created the original music (nice tip of the hat to âBeaverâ) and sound design.

Ansin and her company continue to stretch the boundaries with their adventurous and visionary âreimaginings,â which come off as "from the ground up" original despite being based on already written material.

âSeven Year Itchâ certainly tickles the funny bone, but itâs more than that â itâs an exercise in taking chances and coming through with flying colors.