The creation of a giant, quivering clown fish composed totally of hundreds of Miami school children that is truly comprehensible only from a great height will be the centerpiece when âArt FOR the Sky,â is presented this week in a program in Wynwood. 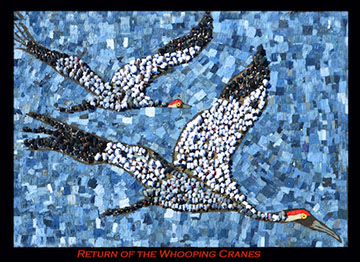 The free town hall event, which is open to the public, will take place Thursday, March 16, at the Jose de Diego Middle School at 6 p.m.

The event will feature a video presentation of the Art FOR the Sky project, along with performances by school bands, dancers, and speakers on the topic of climate change, plus food trucks.

The focus of the event will be the video presentation of the giant clown fish, which is to be created earlier that day by students from the Wynwood middle school along with those from Overtown's Booker T. Washington Senior High School.

The school children will form and be photographed and videoed as the giant clown fish under the direction of Daniel Dancer, whose organization has traveled the U.S. for 17 years creating such projects.

âWe are thrilled to bring Daniel Dancer to Miami, and to work with him in his dynamic "people painting" style that speaks to our local but also global concerns about climate change and rising ocean levels," saysÂ Dale Andree, creator of National Water Dance,Â a simultaneous, site-specific performance held across the U.S."

âWhen kids live in an urban environment, the impact of warming waters on the coral reefs, and the fish they support, donât always seem relevant to them. But we all live in an ecosystem, so this is a way to bring that home,â she adds.

Dancer, who has a masterâs degree in child psychology, has devoted his professional life to working with children in a very unusual way. 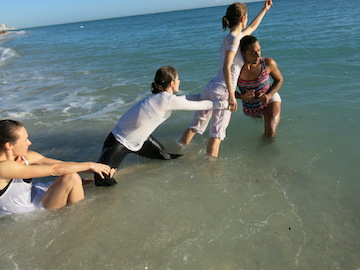 In the 1980s, he visited Peru and became fascinated by the sky art known as the famous Nazca Lines, which are pre-Columbian geoglyphs, large designs that include animals and plants, which were etched into the desert sand by the ancients, and are most visible from the air or nearby hilltops.

Upon his return, Dancer went to work as a photographer for Stan Herd, a famous artist who creates giant images on the earth by using a tractor as a paintbrush and crops for color.

One day, he decided to bring an entire elementary school out to perform as beads on the headband of a 25-acre Indian head.

âI ran into one of those kids 25 years later, and he recognized me and told me, âyou probably donât remember me but I was a red bead in that Indian headband, and thatâs the only thing I remember from elementary school, he said, telling me what an eye-opening experience that had been,â recalls Dancer. 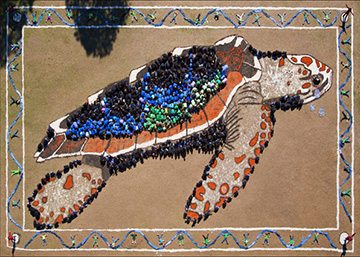 The encounter inspired Dancer to create Art FOR the Sky,â in which school children, wearing pre-chosen colors, are directed to take their places in giant designs, created on a field.

Dancer then photographs them from atop a crane or fire trucks. Drones are also used to take videos.

âEach piece is a gift to the Earth and sky, in apology for how weâve treated the Earth, and also a way of showing our gratitude for all the blessings we get from living on the Earth every single day,â says Dancer.

Special guest speakers include Danni Washington, host of the television show "Xploration Nature Knows Best" and co-founder of the youth-focused marine conservation non-profit Big Blue & You, and Rachel Pausch, a research associate at the University of Miami Cooperative Institute of Marine & Atmospheric Studies.