Author Shelly Gitlow co-wrote the well-reviewed feature film The Boynton Beach Club â which was set in Palm Beach county â and had a career in family therapy. She is also the writer of books on quality management (according to the blurb on the back cover of this paperback). Dispatches From Paradise â set in the swinging environs of Miami and South Beach âÂ is her first novel.

The story is told via three different voices, three first-person narratives. As a writing technique, this offers pluses and minuses to the reader. Yes, telling the same incident through different pairs of eyes is illuminatingâ¦but it can also be confusing. (In the opinion of this reviewer, it works somewhat better when only two first-person narrators are utilized.) 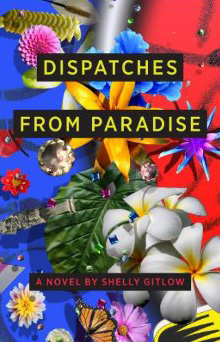 The narrators are three generations of disparate women: a youngish grandmother, Claudette; an approaching-middle-age daughter, Liz; and a teenage granddaughter, Darcy. All have complicated sex lives, and this is the thrust (no pun intended) of Dispatches From Paradise.

Claudette is a former model and still very attractive; she is also a confirmed and unapologetic nymphomaniac. She loves sex and is ready for it anytime, anywhere, which is the root cause of her difficulties with her daughter. The about-to-be-divorced Liz is uncomfortable with sex and shows possible signs of frigidity. Darcy, who shares the same good looks as Claudette, is bi-curious and about to embark on a lesbian relationship. Owing to unfortunate circumstances â i.e., money and relationship issues âÂ they all wind up living in the same house, Lizâs home, and it is the ensuing tension among them that makes up this story. How can they get along?

It is a fast and racy read that would perhaps translate better to the screen than in novel form. In fact, good casting could make this a very watchable film â or television series â akin to Sex & The City, South Beach version. Gitlow has a good eye and ear for dialogue and for creating cutting-edge characters, and Claudette, Liz, and Darcy are protagonists every bit as memorable as Samantha (sister in spirit to sex-loving Claudette); Miranda and Charlotte (some bits and pieces of Liz); and the irrepressible Carrie, whose ambition and approach to life is not so unlike young Darcyâs. As in Sex & The City, male characters play much lesser roles.

This romp will appeal to women who enjoyed that very successful television and film series and to anyone interested in the undulating dynamics of the mother-daughter relationship.

Join author Shelley Gutlow for a wine reception and actor reading to celebrate the launch of her novel Dispatches from Paradise, published by B&B Press.