Mae West. World War ll fliers named their life jackets after her and why not? She was an all encompassing zoftig blonde with all the curves and sly wit that a lonely airman could ever want. A vaudevillian who finally made the big time in the movies when she was long past being an ingenue. Westâs bluntly sexual style and sense of humor made her the second highest paid person in the United States in 1935. (The highest? William Randolph Hearst.)

So anyway, actress Claudia Shear wrote Dirty Blonde, about Mae Westâs life and it earned her Tony and Drama Desk nominations in 2000. 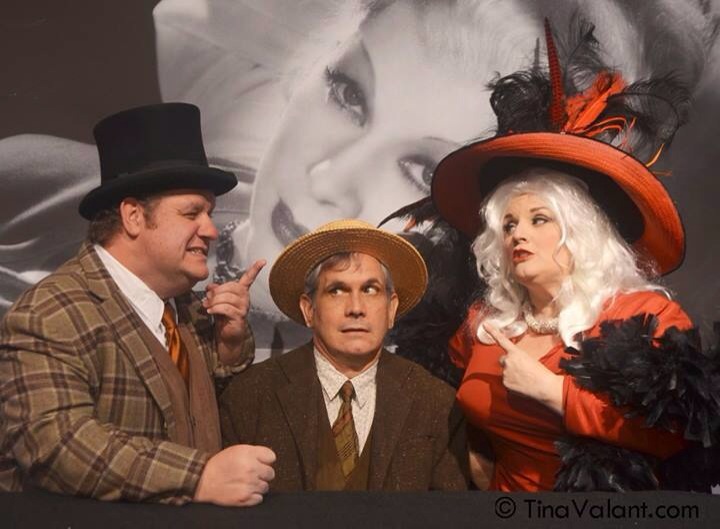 Youâve got to pay attention to this play; Shear doesnât write the obvious and the piece doesnât really jump off the stage at first sight, but if you do follow all the time shifts and character changes youâre going to see some mighty fine performances from Margot Moreland, Ken Clement and Terry M. Cain.

Jo and Charlie are obsessive Mae West fans who meet at her grave. As they build on their relationship they recreate episodes from Westâs life, Moreland, of course, becoming West and Clement donning innumerable hats, faces and accents as Charlie, Harry, Jim Timony, Lt. Gregg, Judge, Duchess, Kid Moreno, W.C.Fields and a muscleman. Terry M. Cain is almost as busy, playing a man, Armando, Joe Frisco, Frank Wallace, Edward Elsner, Ed Hearn, muscleman and the piano. Heâs also the musical director. So you can see thereâs a whole lot of business going on in this almost two hour one act.

Moreland has Mae West cold; sheâs red hot and steaming with sex. She looks like her, moves like her and sounds and sings like her so frankly thereâs much more to like when she and Clement and Cain are playing the bio bits. There are five song and dance numbers and Iâd have loved to see more.