Raise a Glass to the Old and the New 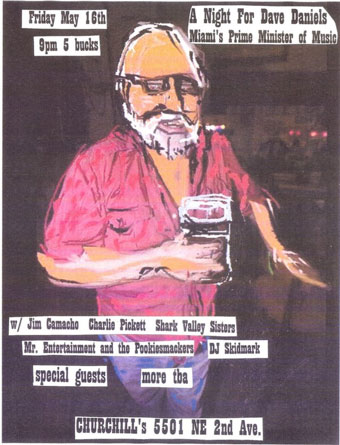 When news came out in February on Crossfade that Churchillâs Pub had been sold, people lamented all over the New Times music blog about the âsadâ news. âThis would be utterly terrible for the local music scene,â said one fan. âIt will be a very sad day,â read another comment. And someone else wrote, âthere goes the only reason to return to my hometown.â On the contrary, others expressed hopes for improvement to their haunt, âCleaner bathrooms or better food?â Since then speculations about the future of the punk rock joint have been spreading around town. Some think it is a sad end to a punk rock era, others think the time for a new beginning is long overdue.

Churchillâs Pub has always been out of place. Established in 1979 in Little Haiti, the small British pub has a huge portrait of Winston Churchill over the front door. One wouldnât think âthe center of the rock music universe in Miamiâ (as called by local musicians) would be located in area of town not considered entertainment central. Â Yet, location has never been the reason for Churchillâs longevity. Now, with new owners taking it over, the future of the establishment is unclear. But, who are the owners?

âThe more time they spend here, the more they want to keep things the same,â said David Daniels, the silver-haired owner of the punk rock establishment for 34 years. âI have confidentiality agreements that prevent me from disclosing their identity. But, I can tell you they are restaurant people.â But, someone told me owners of nearby Soyka and News Lounge will be taking over the pub on May 20, 2014. 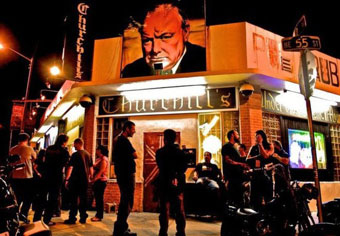 Churchillâs Pub is a landmark of culture, fun, highly entertaining, but albeit trashy. Iâm no smellologist. But, if Churchillâs particular scent could be bottled, it would be called âStale Cigarette Smoke and Old Bar-floor Corner Puke.â However, thereâs reason for its staying power. The wild live music, the anything goes attitude, the laid back anyone-is-welcome-wearing anything atmosphere, the free iced-water, the cheap drinks, the old-time employees or the live rugby.

âThereâs something special about this place. Most music venues donât stay open that long in Miami,â said Franco Paranete, a filmmaker that grew up going to the pub and is working on a documentary called âLittle Haiti Rock City.â On Sunday May 11, 2014, the teaser for âLittle Haiti Rock Cityâ was played on a large screen next to the stage during âNicky and Mr. Câs Birthday Bash,â which was also a fundraiser for the movie. In the teaser, focus is placed on the barâs employees. The five-minute trailer includes interviews with bartenders Nicky Bowe and doorman Mr. C talking about what makes the âbeloved shit-holeâ great. During Sunday nightâs event, the place was trashed. People too furniture, ornaments from the walls, posters, mugs, anything they could get their hands on, hoping to save a relic from the landmark. 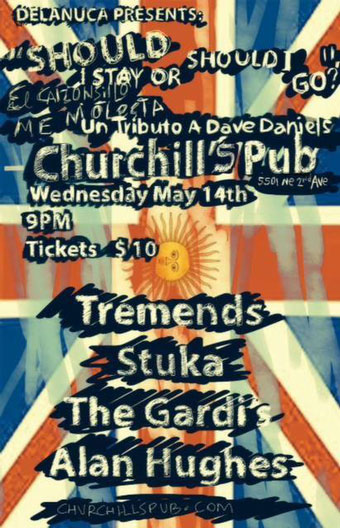 Regulars will miss the man with, what some thought, was an off-color sense of humor. Â I am grateful to him for the welcoming interest he showed to me when I was covering his venue. Â And, apparently many other people are also grateful to him. For the last week, the pub has a series of David Danielâs tribute shows scheduled. On Wednesday, May 14, 2014, Delanuca presents âShould I Stay or Should I Go Now: Un Tributo a Dave Daniels.â Popular local acts like The Tremends are scheduled to play.

On Friday, May 17, 2014, there is a another tribute show for âMiamiâs Prime Minister of Music.â On Saturday May 18, 2014, the âChurchillâs Goodbye Dave Daniels Music Festival,â is scheduled.

Will it turn into a high-end restaurant, will it be clean, will there still be the noisy, loud, and sometimes terrible music of new musicians, will it never be the same? Clearly the end of Churchillâs (as we know it) is near and the future is uncertain, so drink-up while you can at this âpunk-rock Cheersâ and raise a glass for the old and the new.