Iâm not much of a fan of short plays â McPlays, I call themâ bite sized 10 minute snippets that have their share of problems. In full disclosure, Iâve written one short play myself. However, even for me, Iâve found the biggest problem in most short plays is the difficulty in developing characters in such a short time span, That is what leads to the downfall of most short plays. Because of this, most come off like sketch comedy, a la Saturday Night Live skits. Short on depth, big on caricature.

City Theater has made the short play format its lifeâs blood and has pretty much become the "go to" for short play fests with its Shorts Gone Wild, and the annual Summer Shorts â Americaâs Short Play Festival.

So, while I usually act like a long-form snob when it comes to short play fests, City Theaterâs Summer Shorts 2014 gives a good sampling of what can be accomplished on stage in a short amount of time.

The company chose ten plays from what City Theater says are hundreds of submissions from the countryâs "best playwrights." It returns for its 19th year to the Adrienne Arsht Centerâs Carnival Studio Theater in the Ziff Ballet Opera House on the Susan Westfall Playwrights Stage (that title is almost as long as one of the short plays!). Putting ten different plays together in some sort of cohesive collection is a bit difficult. This year, they present the plays as a sort of fashion collection (even though none of them really echo each other in theme) like something Versace or Donna Karan would trot out. Each play is introduced with a fashion-show type voiceover, with each getting a named collection (who is that voiceover, sheâs wonderful!). Mannequins and runway "dancers" adorn the stage. In between plays, while set pieces are being changed, dancers create tableaus. Itâs a bit of stretch and doesnât tie the plays together, but it is fun, kitschy and very South âBeach-y.

Well, enough about the window dressing â letâs get right to it. Itâs best to just list the plays and offer a rundown. The program itself didnât list the plays in order, but Iâm calling âem as I saw eâm Thursday night.

1. Old Flame, by Mira Gibson, directed by Margaret M. Ledford. Two former lovers (Niki Fridh and David Perez-Ribada) meet at a grocery store. Sheâs still feeling "shitty" after he left her to move to Los Angeles. Now heâs back in New York and, unbeknownst to her, has a new young girlfriend. However, she has her own secret. Fridh and Perez-Ribada have good chemistry and Mary Sansone, who rolls into the grocery store on skates, is utterly daffy as Sophia the young girlfriend.

2. Halftime, by Richard Dresser, directed by John Manzelli and Mcley Lafrance. Truly inventive, a coach talks to his team of sixth grade Chick-A-Dee basketball players, weaving the foibles of his adult life into his halftime pep talk. Itâs a 10-minute monologue and Lafrance nails it.

3. Itâs the Jews, by John Minigan, directed by Ledford. Elizabeth Dimon plays a non-profit theater producer who is interested in a playwrightâs (Perez-Ribada) script. The trouble is, for her, is itâs all about Jews. She tries to coerce the playwright into making it about a dancing Gypsy boy. Theater types will like the insider jokes about small-time producers who love to "collaborate" on scripts, but this isnât one of the nightâs highlights.

4. The Click, by Leslie Ayvazian, directed by Manzelli. Not sure if it is me, but this play about a husband and wife at a B&B is like watching paint dry. He has a bad shoulder and is throwing rocks at a log, hoping to eventually hit it; sheâs wishing her husband would enjoy the countryside with her on her birthday. It played out like my visits to upstate New York to visit my aunt and uncle when I was a kid. Irene Adjan and Tom Wahl try to make this work, but it sinks like the rocks heâs tossing into the lake. 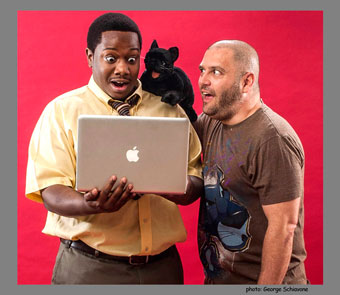 5.Shock and Awww, by Dan Castellanta and Deb Lacusta, directed by Paul Tei. If Castellantaâs name sounds familiar, itâs because heâs won a ton of Emmys and become a pop culture phenom for writing the hit animated show The Simpsons. Too bad Shock and Awww doesnât have some of that great Simpsons humor. Or maybe it did and it just didnât come off in this overly simplified and silly story of a stuffed cat who mind melds two roommates so that theyâll help the pussycats take over the world. Perez-Ribada and Lafrance play it sophomoric, probably moreso even than the material calls for.

6. The Scottish Play, by Theo Reyna, directed by Tei. I saw this offering previously at Mad Cat Theater Company and the operative word here is "clever." The comedy about the question of Scotlandâs "divorce" from England (no, Britain! as you are constantly reminded in the play) becomes relateable by Reynaâs vision that the pair are an old married couple on the verge of splitting up. Dimon and Wahl show off their veteran talents in this one, and the play seems to have become a bit more polished since I saw it as part of Mad Catâs Mixtape 2. 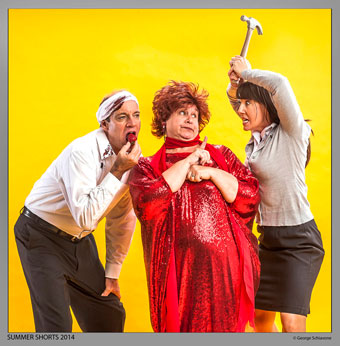 7. My Husband, by Paul Rudnick, directed by Ricky J. Martinez. Rudnick wrote the screenplay for Addams Family Values, but heâs a playwright, known for on and off Broadway successes. The program bio says heâs "rumored to be close to Premiere magazineâs film critic Libby Gelman-Waxner whose collected columns have been published under the title "If You Ask Me." Looks like Gelman-Waxner may have influenced this extremely funny short from Rudnick. The play about a mother who wants to marry off her son now that gay marriage is legal plays off of the stereotype of the Jewish mother who wishes for the big wedding of her child marrying that nice Jewish doctor. The play was previously included in the "Standing On Ceremony: The Gay Marriage Plays," which was at the Broward Center for the Performing Arts in 2012. Irene Adjan is sheer perfection as the doting mother, Gabrielle.

8. Tornado, by Arlitia Jones, directed by Ledford. This play left me scratching my head, not so much for its subject matter about a father who loses his son and is coping with the young boyâs death, but for its placement in Summer Shorts. While the producers were no doubt going for range, this dramatic play sandwiched in between so much comedy seems oddly out of place. Youâre waiting for the piece of comedy to come, and it doesnât. Wahl as the grieving father, however, makes it work.

9. Make John Patrick Shanley Go Home, by Holli Harms, directed by Ledford. The play takes a back seat to the performances in this short by Dimon, Adjan and Fridh as three sisters who meet for lunch in a New York restaurant. Harms does, however, manage to give her characters some real depth, and very comedic, in the short ten minutes, so kudos for that.

10. Joshua Consumed An Unfortunate Pear, by Steve Yockey, directed by Manzelli. Wahl sits on a couch, his head bloodied and wrapped in a bandage, and eats a pear that guarantees immortality. Fridh as his girlfriend doesnât care what heâs eating, sheâs just ready for the relationship to end because Joshua is a lousy lover, and then some. A bejeweled chorus backs up her thoughts and his. Death (Dimon) arrives in a red, glittery track suit. This closer is existentially hilarious and a great way to finish off the night. Sorry to the folks who missed the rest of this on opening night when it was cut short after a medical emergency in the audience. Go back and see it if you missed it. Itâs worth it.

Summer Shorts through July 6 at the Carnival Studio Theater in the Adrienne Arsht Center, 1300 Biscyane Blvd., Miami. 305-949-6722 or visit arshtcenter.org.