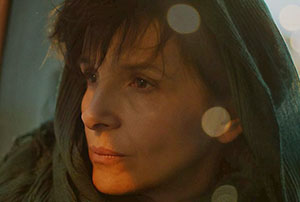 The dust mites swirl furiously as shafts of light pierce through the darkness. Rebecca Thomas' eye takes everything in with clear-eyed matter-of-factness, seconds before the back of the truck is opened, and the war photographer, her face partly covered by a black veil, sets foot in what appears to be somewhere in the Middle East. Her finger on the camera shutter, the driven photojournalist clicks away, capturing what first appears to be a burial, but is actually a suicide bomber's final preparations before she carries out her mission.

The opening scene of 1,000 Times Good Night, the somber domestic drama now showing at the Bill Cosford Cinema and the Tower Theater, succinctly establishes the protagonist's no-nonsense fearlessness, and gives viewers an umpteenth reason â really, I've lost count â why Juliette Binoche is not only one of the most gifted actresses working in movies today, but one that keeps showing us heretofore unseen nuances with each performance. I've been a Binoche groupie since she played another photographer in The Unbearable Lightness of Being, years before her raw, revealing performance in Krzysztof Kieslowski's Three Colors: Blue cemented her status as a captivating screen presence.

It's been nearly two decades since Binoche's Oscar-winning performance in The English Patient made her a recognizable face even among the multiplex crowd, but the versatile performer, who turned 50 this year, shows no signs of slowing down. She's far and away the MVP in 1,000 Times Good Night, a reasonably engaging character study undone by director Erik Poppe's stilted depiction of family dysfunction, coupled with a self-righteous streak that cheapens Rebecca's urge to put herself in the front lines of international conflicts to deliver the kind of you-are-there reportage achievable by only the bravest journalists. 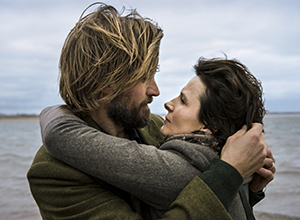 But getting back to that suicide bombing, Rebecca asks to ride along with the young woman set to detonate herself in the middle of a crowded street. When local authorities spot her snapping away, however, she triggers a chain reaction that ends with her landing in a Dubai hospital bed as her Ireland-based hubby Marcus (Game of Thrones' Nikolaj Coster-Waldau) looks down at her. He takes her home to their two daughters, but what initially seems like a harmonious clan is quickly shown to be a mirage for deep fissures between the compulsive shutterbug and her loved ones. âI'll stay until you're well, and then, I don't know...â Marcus tells Rebecca with a weary coldness that's startling, if a tad too muted. Her older daughter Steph (Lauryn Canny) has grown resentful of her mom's long absences. âI hope it was worth it, the picture,â the sullen teen tells her.

Being the go-getter she's proven herself to be, Rebecca springs into action to save her crumbling marriage and restrengthen her ties at home. âI'm not doing conflict anymore,â she curtly tells her editor via video phone. But is she truly done with the very thing that drives her, that talent that few others can pull off like she can? The inner conflict Poppe and co-screenwriter Harald RosenlÃ¸w-Eeg create for Rebecca is thorny, rich with potential, but they smother it with stiffly rendered marital malaise, and even worse, they occasionally turn Binoche's character into a mouthpiece for ethical integrity, a noble sentiment that nevertheless torpedoes the film's evenhanded approach and compromises an otherwise fine performance. You can feel the wind being taken out of the movie's sails whenever Rebecca starts spouting current-affairs editorializing.

It's not as if Poppe (Troubled Water) is a slouch behind the camera. He fills 1,000 Times Good Night with indelible images befitting his subject. The film is by turns unnerving and meditative â¦ as long as it stays away from the soapbox, which isn't often enough. The filmmakers have given the narrative a clean four-act structure that ought to work like gangbusters but indulges in some baldly contrived plot turns that stick out like a sore thumb when contrasted with the character-driven verisimilitude the cast conveys. Despite Binoche's mighty efforts, 1,000 Times Good Night never recovers from its self-congratulatory ambitions and mechanical plotting. It's the movie that winds up shell-shocked.