OUT shine Centerpiece Biopic Had Promise

The pornstaches are glorious, and so are those king-sized bulges. Tom of Finland's art gives off a liberating joie de vivre that celebrates and even transcends the homoerotic scenarios it depicts. Men with chiseled physiques and genitals that would make Jeff Stryker green with envy cavort in varying states of undress and intercourse positions, finding explicitly rendered release, and oftentimes sadomasochistic pleasure, in their own company. These iconic drawings are too cheerful in their depiction of physical ecstasy to be called smut with a straight face.

(See what else is playing this weekend at OUTShine. Check the Schedule. )

Granted, this fall's centerpiece selection at the OUTshine Film Festival in Fort Lauderdale is taking on a subject that's a pretty tall order. A stiff proposition, if you will. But rarely has this critic seen a fact-based chronicle that works so hard to tamp down what makes its central figure so special. Director Dome Karukoski is dead set on shaping highlights in Touko's personal and professional life to fit the biopic mold. What comes out of such tinkering is defanged and thoroughly conventional, the opposite of what a Tom of Finland feature ought to be like.

But Karukoski, who is straight, doesn't allow you to take in the decadent ambiance. Peek-a-boo shots and quick cutaways are the order of the day, and no, an earlier long shot of naked soldiers splashing around in freezing water doesn't even begin to make up for such timidity. It's as if he's afraid of making hetero audiences iuncomfortable.

But nestled in the perfunctory and workmanlike mise en scene is an intriguing depiction of solidarity between closeted brothers-in-arms. It is possible to live a life of contentment as a gay man, Alijoki seems to convey to Touko, as long as it remains a secret.

And then the clichÃ©s start pouring out like a faulty faucet.

Back in the home he shares with baby sis Kaija (Jessica Grabowsky), Touko is perplexed at his sibling's reaction when he comes out to her. She's convinced his attaction to men is a temporary side effect of his wartime service. âThis is a phase,â she tells him. And so he joins Kaija as a designer at an advertising firm in Helsinki.

But the gifted illustrator is haunted, you see, by the memory of a parachuting Russian soldier he took down for the motherland. Those distinctive facial features, including (you guessed it) a prominent mustache, fuel his creative juices enough to draw ultramasculine men getting off on the downlow. And then draw some more brawny lads. And then draw some more. 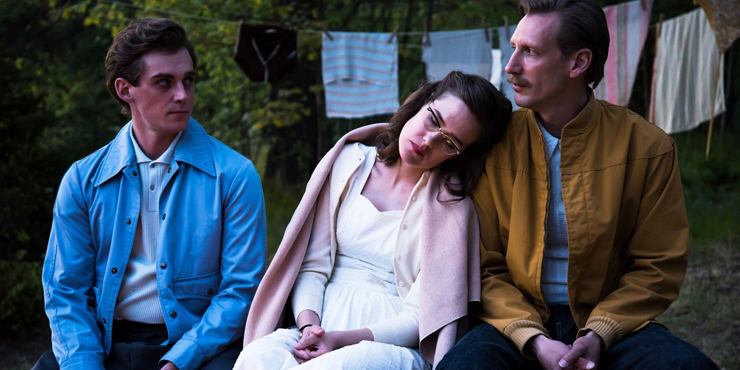 If only Karukoski showed similar panache. But instead of focusing on Touko's creative process, how he came to hone and perfect his formidable men on paper, âTom of Finlandâ gets bogged down in a wan romantic triangle that forms between the artist, his sister and their new tenant, Veli MÃ¤kinen (Lauri Tilkanen), nicknamed âNipa.â I hesitate to use the word âreductive,â but there it is.

Karukoski wisely explores Kaija's infatuation with the handsome lodger, then heartache when she discovers Nipa's affections lie elsewhere. But the trio's emotional entanglements fail to catch fire; they amount to a hill of beans when compared to Touko's prowess with a pen and pencil. Sadly, every time he sits down to work on his gorgeous men, the filmmaker can't wait to cut away to the next scene.

Instead of championing Tom the artist, Karukoski turns his story into one of prejudice and persecution. He turns his back from what makes Touko a unique figure in order to focus on his defiance to a society that ostracized him. In other words, his portrayal is one of bravery and steadfastness in the face of bigotry. The art is here reduced to a plot point, festive window dressing in an otherwise dour and by-the-numbers portrait.

âTom of Finlandâ nevertheless comes to life, however briefly, in its later scenes, when Touko finally sets foot on U.S. soil. The scenes featuring American characters might feel clunky, but at least they delve into what this biopic should have really been about: the artistic process and the treacherous world of publishing. But this is a short-lived bright spot in a film that waters down a transgressive provocateur. It's maddening how it manages to turn a man who made carnal intimacy between men so joyous into such a dullard.

The film screened earlier this week to a sold-out crowd at OUTshine. I'd like to think a sizable enough portion of the audience familiar with Tom of Finland's work saw this for the missed opportunity it is. As disappointments at the movies go, this one hurts more than most.

âTom of Finlandâ opens Oct. 13 in New York and on Oct. 20 in Los Angeles and San Francisco. A South Florida commercial release date has not been announced, but it is scheduled to roll out across the nation.