A Conversation With Giancarlo Rodaz 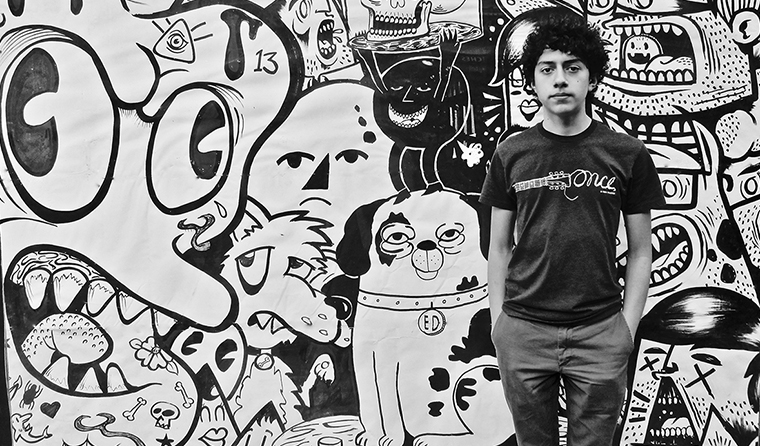 About a decade ago, Giancarlo Rodaz resembled many youngsters. For instance, he enjoyed playing video games and drawing. While he essentially grew up in the theater, "I didn't want any part of it," the now 23-year-old says.

Still, his parents, John and Maria, forced him out of the house and into the theater they'd founded â the award-winning, 30-year-old Area Stage Company. But the young Rodaz entered the building sulking. He wished to remain home, playing his video games and drawing.

Yes, a lot can change in roughly a decade. Specifically, Rodaz's transformation demonstrates the addictive power of live theater. Indeed, after a reporter asked him what happened, Rodaz said he "became addicted" to the art form. "I don't do drugs, by the way," Rodaz added.

He is, by turns, unpredictable, funny, lively, a mentor-like figure, authoritative yet pleasant, friendly, sincere, and blunt. Surely, if Rodaz were a character in a play, he would hardly represent a stock figure. And just as the Miami-area resident seems to possess a multifaceted personality, one could easily describe him as a well-rounded theater artist.

If you were to search Rodaz on the Internet, you'd likely find a resume of sorts on abouttheartists.com. Next to each of the productions on which he has worked, the website lists multiple roles. For instance, he served as lighting designer, scenic designer and director for Area Stage's production of "The Little Mermaid" in January and February of this year. Further back, Rodaz took on the director's position, as well as scenic designer, lighting designer, sound designer and visual effects designer for Area Stage's 2018 mounting of "She Kills Monsters." 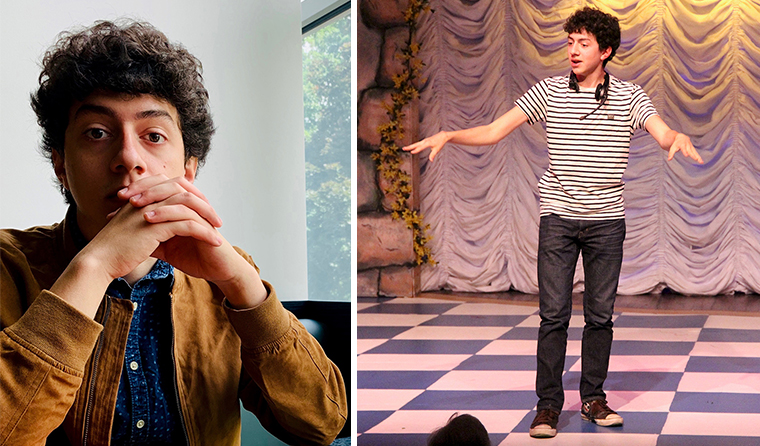 But being prolific, by itself, isn't the only characteristic of Rodaz' young career. Quality is anotherÂ â at least according to those in South Florida who judge theater. In particular, Rodaz received a Carbonell Award nomination for Best Lighting Design for Area Stage's 2016 production of "The Nether."

Meanwhile, Rodaz's direction of "The Wizard of Oz" called "for many innovative solutions," according to his mother, Maria. "After ample discussions on the substance of the reality of "Oz" within the dramatic architecture of the play itself, and how costume choices would help the audience navigate the play's central idea of reality versus dreams and imagination, Director Giancarlo Rodaz proposed that the witch in Dorothy's imagination would have a nose that could be made out of paper."

It was a choice "that would line up with his vision," according to Maria. So, what is the younger Rodaz's general approach to directing? "You can't do anything that's been done before," he says. "Whatever people expect, you can't do it. You gotta surprise people."

At the same time, everything must work in service to the story. Further, Rodaz said he believes in stripping a show down to its core elements, basing his direction on the story and character arcs. Simplicity and economy are two apt adjectives to describe Rodaz's directorial vision. One can stage, for instance, Lord of the Rings with two or 100 actors, Rodaz said. Clearly, it seems he'd opt for the former. Meanwhile, the young man didn't mince words while voicing his opinion on the 2008-2010 Broadway production of "Shrek."

"The Broadway production completely and utterly missed the point," he said. Rodaz added that the creatives wanted to "dazzle" audiences by including huge sets and elaborate costumes. The problem was, the scenic design and costumes hid the actors, according to Rodaz. Frankly, the production "sucked," said the young man, who quickly added that the actors were "amazing."

Theater should emphasize actors and people, according to Rodaz. By contrast, film focuses on images, he added. By the way, Area Stage's Shrek was a minimalist, yet hardly cheap production. The magic the behind-the-scenes artists implemented was simple and visible. For instance, audiences clearly saw the pads protecting the knees of Lord Farquaad as he walked and knelt on them to appear short. Further, audiences witnessed behind-the-scenes artists pulling strings to move a gingerbread man. And "Shrek," an "angsty kind of guy," in Rodaz's words, played the guitar. 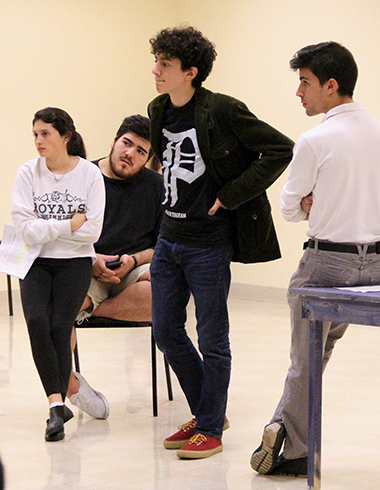 Soon after his parents got him out of the house and into the theater, and despite his sulking, Rodaz began performing within Area Stage's conservatory program. Then, just a few years later, directing apparently felt right for him.

"I just asked" to direct, he said, adding he'd been interested "for a while."

"I knew it was a matter of time," said his father, John, who founded Area Stage with his wife. He is also the company's artistic director.

Giancarlo "felt ready and I knew he was ready," John said. "You just have to dive into it. You can't do a lot of âbook learning.'" But even though the younger Rodaz had watched his father direct shows, he described his first directorial experience as "scary."

Giancarlo recalled that, during his early directing days, his parents were in their offices. He'd come up with an idea, but seek validation from his folks. As a matter of fact, during a two-hour span he went to their offices three times.

Now, "I try to stay away when he's directing," John said. "He needs to find his own voice."

However, that's not to say John and Maria don't give their son notes. But, they let him take risks.

And the younger Rodaz apparently isn't afraid to assert himself or stick to his instincts. For example, he recalled that after suggesting Area Stage produce "Shrek," others didn't think it was a good idea. But Rodaz wanted not only to stage a production, but do so in the right way. And so, in the spring of 2018, the company produced the musical. More recently, Area Stage's conservatory was preparing for a production of "Frozen, Jr." The auditorium was a hive of activity. Set builders worked onstage, the sound of drilling filled the air and students whisked by.Â

Rodaz did the production design for the upcoming production "Frozen, Jr."It is part of ASC's Inclusion Theatre Project and is on stage Friday, July 12 and Saturday, July 13.

Now in its fifth year, ASCâs Inclusion Theatre Project provides a rare opportunity for actors with disabilities to perform, and was created to encourage actors with special needs toÂ discover and develop new skills that are relevant to their everyday lives.Â

He reassures some younger of the younger conservatory members in the show. "You'll be fine, I'll see you tomorrow," he told them.

A youngster told Rodaz she forgot something onstage. From the back of the auditorium, he projected his voice so a worker on stage could hear him.

"She needs to get something she left on the set," Rodaz said pleasantly, yet authoritatively. Rodaz might assert himself at times â he admits to firing an actor who argued loudly with him.

But, the talkative artist radiates charm and an easy-going manner, at least judging from a recent Interview. With glasses perched on his forehead, above which rests dark hair, Rodaz's eyes sometimes widen in excitement. In addition, he laughs and smiles easily and pleasantly. One of the youngsters called him "John John."

But just when you're in the presence of the laid back "John John," he might utter a blunt remark.

"It's so easy to make a piece of garbage," he said, referring to creating live theater. "Theater's really hard to get right."

Sometimes, when he's directing a show, he thinks to himself, "I shouldn't be anywhere near theater." 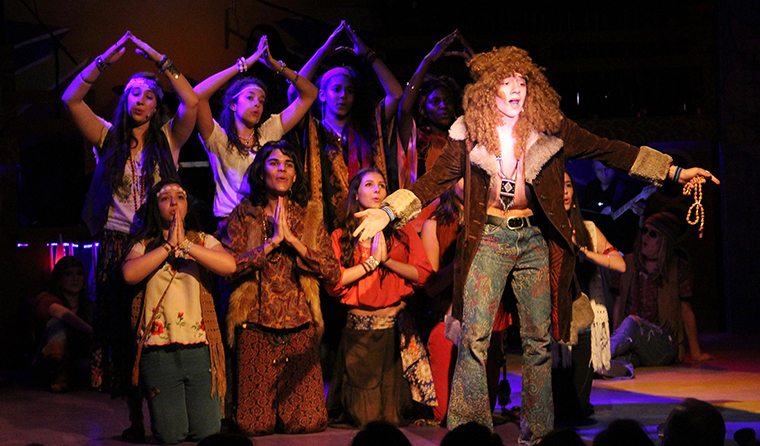 And when he observes his work from afar, sometimes he cringes, realizing he could've done something better.

Is he glad he decided to create theater? "I resent every moment," he said. "I'd have a life" without it.

Then he admits he's kidding.

"I'm glad I have something that gives me purpose," he said.

Moreover, Rodaz said theater is rewarding. Specifically, a fulfilling feeling comes with everyone gathering to tell a story. Also, the art form is "immediate."

And, in all seriousness, "don't do drugs and don't drink," he advised.

This, coming from a 23-year-old, who is still a self-admitted "bored kid that plays video games."