A Picture is Worth Much at Measure 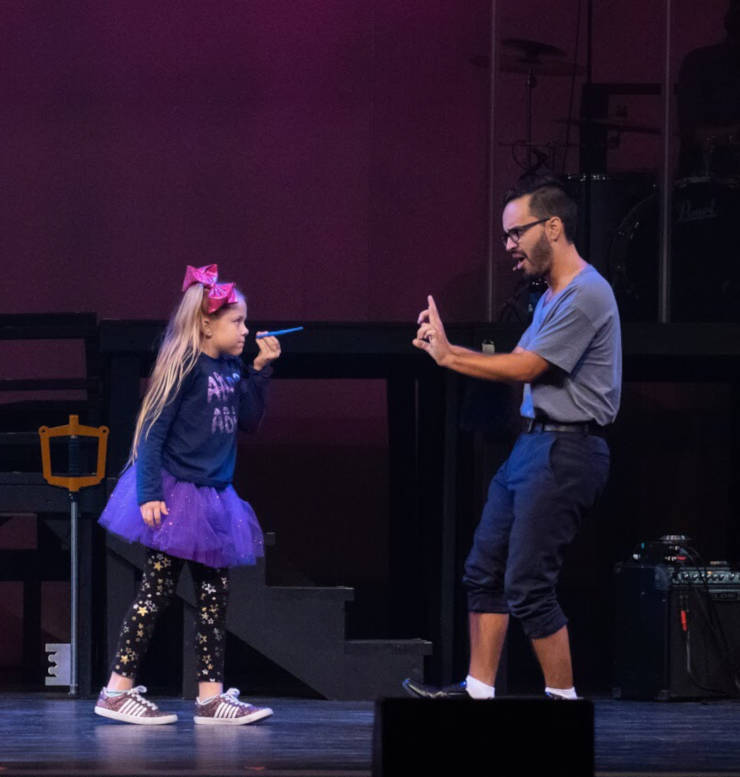 Allyson Nicole Ryan is a terror of a little girl to Ernest Gonzalez' flustered father in Measure for Measure Theatre Company's production of "35MM: A Musical Exhibition." Photos by Clifford Spulock

Songs, like pictures, can tell stories â even if theyâre little more than âsnapshotsâ into a singerâs world.

With that in mind, South Florida director Daimien J. Matherson has dispensed with the static, giving vibrant life and movement to "35MM: A Musical Exhibition."

This unconventional musical theater piece is receiving a visually-pleasing, electric and entertaining production to open Measure for Measure Theatre Companyâs season. It runs through Sept. 30.

Composer and lyricist Ryan Scott Oliver created the show based on photographs taken by his partner, Matthew Murphy. While the pair wrote the show essentially as a concert, with five people singing at different music stands, Matherson had a different vision. He added a sixth performer, as well as choreography and dancing, to animate the piece. 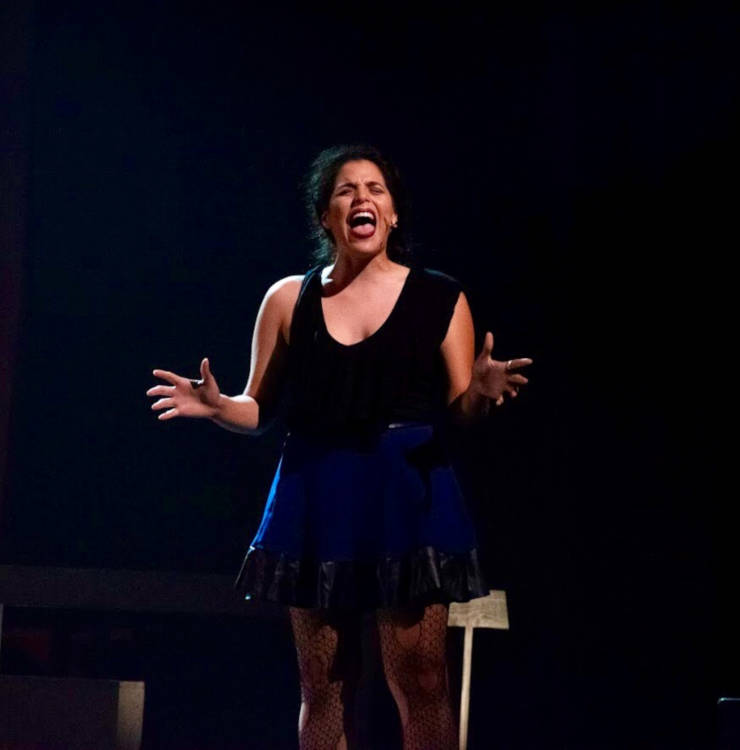 Samantha Villarroel belts out a song in "35MM: A Musical Exhibition." Photos by Clifford Spulock

Together with a vibrant four-piece band, the Countess De Hoernle Theatre at Spanish River Community High School in Boca Raton pulsates with energy.

In fact, even the lighting instruments move, flashing, darting from side to side or rotating in circles. The instruments resemble roller coasters giving off harsh, diagonal shafts of colored lighting.

However, the most exciting movement comes courtesy of choreographer Kelly Johnsonâs riveting and diverse dance direction. While the varied songs tell narratives, the performersâ movement enhances the storytelling. Whether its robotic, swaying and gentle, acrobatic, forceful or sultry and sexy, the narrative-enhancing dancing can bring to mind that seen in, for instance, "West Side Story."

Instead, this roughly 80-minute piece demonstrates how the genre is increasingly taking on different forms and styles.

Specifically, with "35MM: A Musical Exhibition" audience members browse Murphyâs vivid, stunning photographs before or after the show. If they wish, they can try to guess which song corresponds to which photograph. While thereâs a correct answer (each photograph did inspire a specific song,) patrons might think differently.

Surely, art is subjective and is often open to interpretation. Besides, some of the âcorrectâ answers might surprise you.

Meanwhile, the performers will delight you with their vibrant, rangy, strong and expressive voices. For instance, one of them amazes with an ability to hold a note for many seconds. However, the performersâ voices arenât always clear; youâre liable to miss several lyrics if you donât strain to listen hard.

The stories the songs tell and emotions they convey are as diverse as the disciplines contained within this show.

The musical numbers range from âOn Monday,â about one week in the beginning and possible ending of a relationship, to âLeave Luanne.â The latter relates a tale of an abused woman unable to escape her pain-filled life.

Certainly, theater practitioners these days are trying to be extra sensitive when it comes to stories of men abusing or belittling women. The female-empowering, abuse-exposing #MeToo movement has a way of making such stories seem dated and insensitive if theyâre presented too graphically. 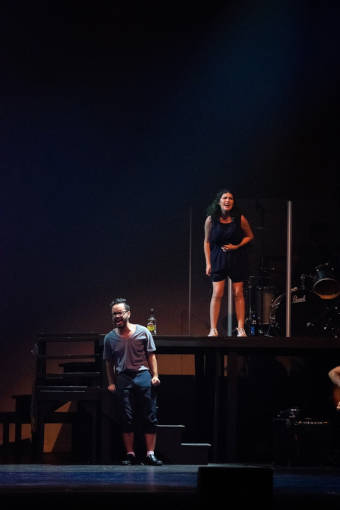 Ernesto Gonzalez and Stephanny Noria appear in a scene from "35MM: A Musical Exhibition." Photos by Clifford Spulock

To his credit, Matherson has made âLeave Luanneâ palatable without removing too much of the darkness inherent in this âSouthern Gothic Ghost Story,â as Oliver describes it. In addition, throughout the show, the female performers inhabit their characters with a swagger and confidence. Therefore, we get the sense of strong-willed people who arenât about to let others push them around. At the same time, they remain likable.

Unfortunately, itâs difficult to tell which actor plays which role in this production. Thatâs because the program, with one exception, lists the characters only as âMan 1,â âMan 2,â âWoman 1,â Woman 2, etc., next to the performer playing that part.

The exception is child performer Allyson Nicole Ryan, who shines in âCaralee,â about a rambunctious little girl. Ryan nicely combines hyperactivity and ambition.

Generally, the performers present vivid portrayals, complete with telling facial expressions, strong, but not straining vocal performances and vibrant dancing. Several cast members sing and dance with the confidence and charisma of a veteran Broadway performer.

Of course, they have strong material with which to work. Oliver has received many accolades, putting him in the company of the likes of Benj Pasek and Justin Paul.

Oliverâs songs deftly reinforce the variety of moods and emotions within the stories and the photographs which inspired them. The musical numbers range from the hard-charging to the quieter, and include styles such as Pop/Rock as well as Country/Western. Meanwhile, the lyrics are sometimes darkly humorous, unflinchingly direct as well as sincere and poetic.

Some songs in "35MM: A Musical Exhibition" put a single actor or two in the spotlight. Credit Matherson for using the simple set designed by him to highlight such a performer. For instance, sometimes a performer stands on one of the platforms within the set, making him/her stand out.

While this production has its positives, there could be improvements. For instance, near the showâs beginning, a couple of actors, while singing, stand upstage. Meanwhile, those positioned downstage block them. Also, itâs important that either the singers enunciate the lyrics better, sing slower or the sound improve, so that we can make out most, if not all, lyrics.

Even so, the performersâ vivid facial expressions and movement keeps us riveted to the stage.

For the most part, Matherson creates interesting stage pictures. However, this production would improve if Matherson placed Murphyâs photographs somewhere on stage. It would allow audience members to more easily guess which photos inspired which songs, without having to resort to memory.

Instead of resting onstage or flashed onto a wall using a projector, Murphyâs photographs stand exhibition-style in the audience seating area.

But, the program refers to this show as a âmultimedia Musical.â So, perhaps projections could aid in telling the stories.

Nevertheless, in the end, this showâs fusing of multiple disciplines creates a unique live experience. Itâs one which will deepen your appreciation for the potentialities of musical theater â and instill you with hope for its future.