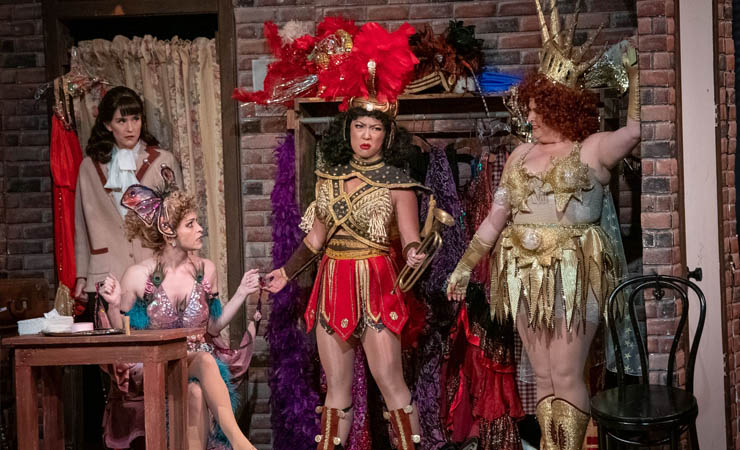 Actress Laura Hodos captures both the pathos and the joy of her role as Mama Rose in her unique take of the famed role in the musical âGypsy,â which is now at the Wick Theatre in Boca Raton and running through Feb. 13.

âGypsy,â written by the team of Arthur Laurents, Jule Styne and Stephen Sondheim and with Ethel Merman originating the role of Mama Rose on Broadway in 1959, it is one of the best musicals of the 20th century. 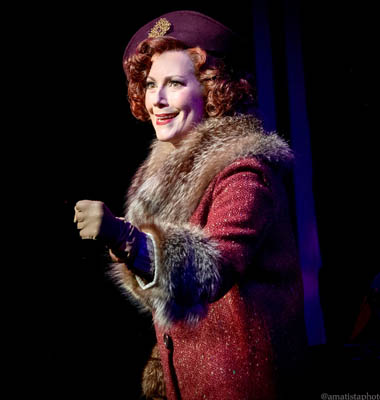 Based on the biography of strip tease artist Gypsy Rose Lee, the story centers on Rose, the pushy stage mother who will do anything to get her two daughters, especially young June, into the limelight of vaudeville.

Although Merman and other major stage stars, such as Angela Landsbury and Bernadette Peters gave their takes on âRose,â Hodos makes sure to not bring a stereotype or a carbon copy of someone else's portrayal.

Hodos creates a warm, sensuous Rose making her romance and lustful advances to her childrenâs agent, Herbie (Matthew W. Korinko) believable and the audiences rooting for Mama Rose to have her happy ending, despite so many character flaws.

Hodos, unlike the notables who have played the character in their fifties, Hodos plays the role more age believable to be the mother of two teen daughters. 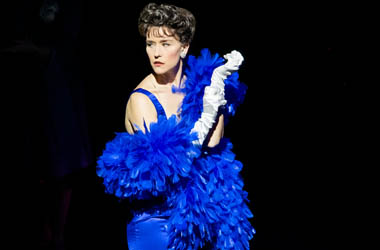 Hodoâs rich mezzo-soprano range captures the drama of the songs âEverythingâs Coming Up Rosesâ as well as the tenderness of âSmall World.â âYouâll Never Get Away From Me" was a romantic lullaby to Herbie and the powerful "Rose's Turn" in Act II doesn't disappoint.

Along with Hodos, Melissa Whitworth as the teenaged Louise who, in act two is transformed into Gypsy Rose Lee, shows much vulnerability in trying to protect younger sister June while quietly asserting her independence as we enter Act II. Whitworth and actress Kristi Rose Mills (June) assert their growing frustration of Rose and add the right comic tone to the duet of âIf Momma Was Married.â

Director Norb Joerder had many challenges putting together such a large cast, including four child actors who play as âBaby Louiseâ and âBaby Juneâ in alternate performances, This was all done, too, in the height of Covid that forced a delay in the opening of the three-week runÂ  from Jan. 5 to Jan. 12. 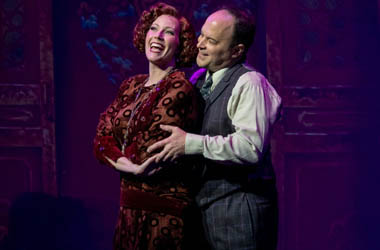 âPutting this production together at the time of Covid has been the most difficult work I have ever done,â said Joerder, who has directed six productions of âGypsyâ in his long career as a director on Broadway as well as ten productions at The Wick.

âWe (the cast and crew) were double tested three times a week, wore masks at all times until we hit the stage in front of an audience and weÂ  lost half our rehearsal days to quarantine layoffs and still got this wonderful musical up on the boards,â said Joerder.

Child actress Addie Jaymes ( who alternated with Alejandra Bess) as Baby June is a triple threat in singing, dancing, and gymnastics (tumbling and cartwheels) in Juneâs starring role in the family vaudeville act. Gaby Lopez (who alternated with Lyla Chaubel) as Baby Louise effectively conveys the character's frustration of her mother pushing an outdated vaudeville act on the girls.

Korinko as the patient but much abused Herbie shows romantic chemistry with Rose and picks up the playfulness in âYouâll Never Get Away From Me," while remaining heartfelt in âSmall World.âÂ

Credit Wick costume designer Jim Bluff for creating the strippers zany and colorful costumesÂ  as well as the elegant dresses of Louise as she transforms into the svelt Gypsy Rose Lee.

Other standouts in the cast include veteran Wayne LeGette in the dual roles of Weber and Goldstone and actor/dancer Willie C. Beacon II in the energetic duet with JuneÂ  in âAll I Need Is The Girl.â 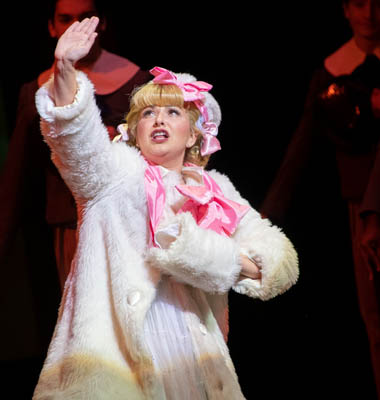 The three young age 14 and under boys in the cast that danced with Baby June in her vaudeville routine in act one (Sebastian Baroulette, Jonathan Henry Jacknow and Zachary Kopelman) all show their versatility in their free wheeled dance steps. Dance choreographer Adolpho Blaire deserves credit for keeping things together as the young dancers perform in unison.

Credit goes to Musical Director Darren Cohen for working with the large cast and treating the score with such care. The strong vocals made up for there not being a live orchestra but tracked music.Â Â

The musical, set in the waning days of vaudeville, featured a period set designed by Kimberly Wick and projection design by Josieu Jean. Prior to the opening of the curtains, Jean created a list of cast and roles on the curtain to create the effect of watching the opening of the musical as if it was staged as a silent film in the 1920s.

âGypsy,â runs through February 13 at the Wick Theatre, 7901 North Federal Hwy. in Boca Raton Showtimes are Thursday to Saturday at 7:30 p.m. with matinees on Wednesday, Saturday and Sunday at 2 p.m. Tickets range from $75-95. For more information and to order tickets, go to thewick.org or call 561-995-2333.