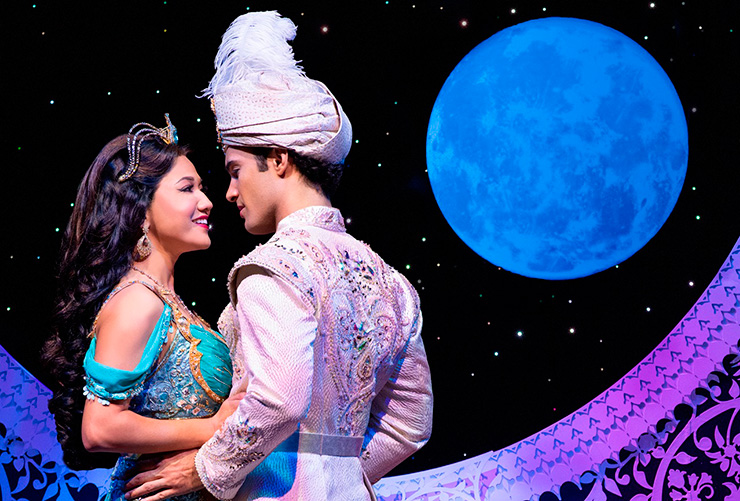 If only all of my wishes came true in my expectations of the touring "Aladdin." I wanted the Genie to knock my socks but Korie Lee Blossey as the Genie in "Aladdin" couldn't slow down long enough to deliver lines that I could take in and understand. If only I felt that I was thrust into a magical Middle Eastern city instead of being a spectator watching a show from a seat in a theater. If only the production gleamed like real gold instead of gold plating.

But luckily the spectacle of this show overtakes any flaws in character that are rampant in the touring production of Aladdin.

It's not about learning why this Genie has felt so stifled in a bottle for 10,000 years or why Aladdin lost his mother (we don't really find out in the script), it's more about oohs and aahs over more than 300 costumes and a flying carpet.

Jonah Ho'okano is Aladdin, the street urchin who finds a magic lamp and pretends to be a prince. A song added to the Broadway musical and not in the movie, "Proud of Your Boy" is Aladdin's vocal moment to wow the audience and Ho'okano took full advantage. He also added the swoon as the Magic Carpet hovered and moved on the stage against a starlit backdrop in Act II with the song that became a Top 40 hit "A Whole New World." 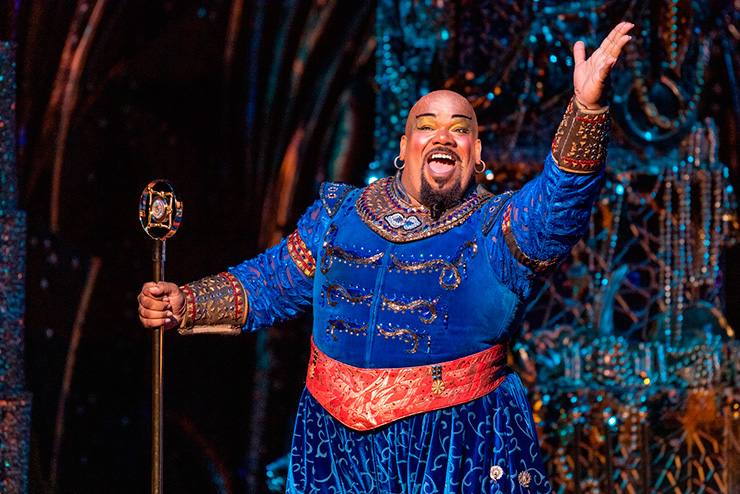 Aladdin's sidekick monkey has been replaced by three Hear No Evil, See No Evil, Do No Evila, although they all do all of it it. Babkak (Zach Bencal), Omar (Ben Chavez) and Kassim (Colt Prattes) steal the thunder from what's usually the comic giant in this production. When Genie says, after 40 minutes being offstage, "did you miss me?" Nope, we had the antics of these three to keep us entertained. 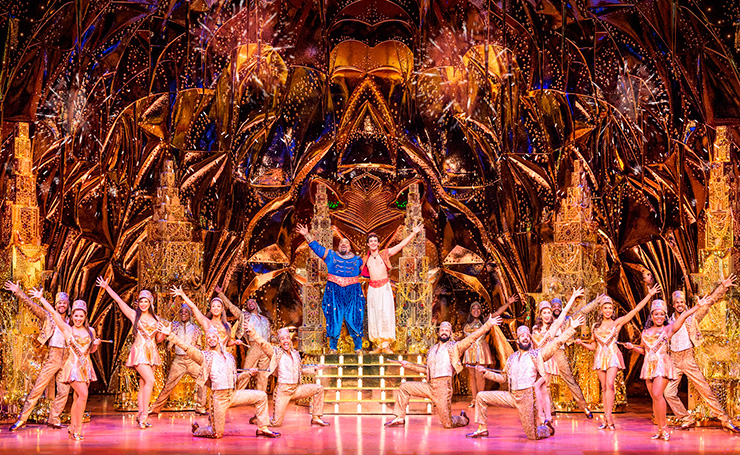 OK, so when you make three wishes about going to see "Aladdin," one of them isn't: "Oh, I want to see some great acting portrayals in the show." That would burn away one of your wishes for sure. You want to see spectacle and magic and silliness. This "Aladdin" delivers that wish for sure. Oh, and if you're sitting in the first 10 or 20 rows and your wish is to be covered in purple and white streamers, that wish comes true, too.