Art Wynwood, theÂ  winter contemporary art fair, returned to Miami this Presidentâs Day Weekend for its seventh edition. From February 15 to 19, the fair was housed at at a fancy new location. The fair moved from the Wynwood Pavilion to the One Herald Plaza, which is located in the waterfront area near the Adrienne Arsht Center.

The impressionable entrance to the building was lit up with amethyst lights causing the floor-length glass to glow. One could see the colorful art hung up on the white exhibition space from the exterior. A statue of a well-endowed naked man at the entrance was a centerpiece of humor; a mural of an urban cityscape from New York based photorealist artist Logan Hicks, who was honored with the Art Wynwood Tony Goldman Lifetime Artistic Achievement Award, gave visitors a great photograph backdrop, and live spray painting from JonOne added to the exciting exterior energy.

The element of showmanship trickled throughout the interior of the fair with a seven piece costume display Lucky 7 from Luiz Valenzuela. Throughout the space, his collection of eccentric garbs was displayed. One of the pieces was presented as part of a live performance art piece featuring a model wearing a metallic face-covering mask and a long white avant garde space dress. 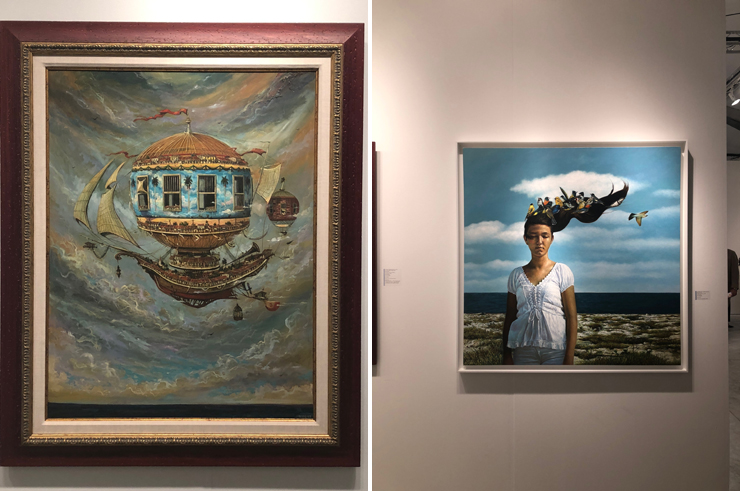 A bright, colorful and captivating exhibit popped out from the others with ingenuous energy. Surprisingly, the creator of these works is a Rock and Roll Hall of Fame inductee Jason Newsted from Metallica. The rocker turned painter presented his exhibition titled RAWK by gallery 55Bellechasse to benefit the Perry J Cohen Foundation.

One can always count on Cernuda Arte to presents classic art from legendary Cuban artists like Jose Mijares. His 1975 piece Half Moon (Media Luna) was part of the Coral Gables galleryâs exhibit. Vicente Hernandezâs piece The Last Flight of Matias and His Friends (El Ultimo Vuelo de Matias Y Sus Amigos) and Sandro de La Rosaâs piece State of Grace (Estado de Gracia) are two of stunning, masterful works that were exhibited by this gallery. Each is well over $10,000, and they are true treasures for anyone to behold. 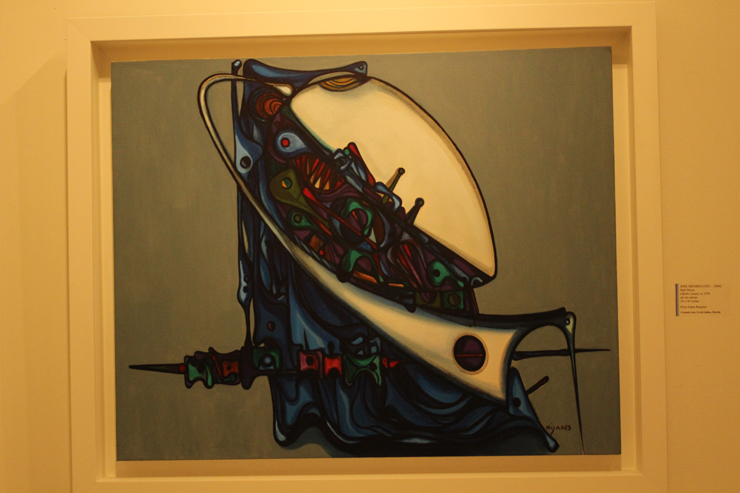 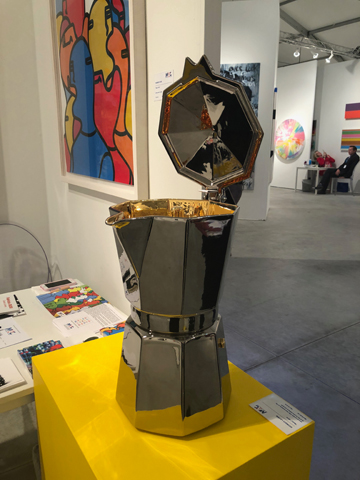 Speaking of Cuban culture, âWould anyone like a cafecito?â Giorgio Laveriâs 2016 Moka, a glazed ceramic rendition of a stove top Cuban coffee maker amused passers by. And his piece wasnât the only one that expressed an artistic sense of humor at Art Wynwood 2018.

In her pieces from the POST series, she explores the stories behind the some of the worldâs most famous paintings. Jean Michel meet Andy includes an imaginary Instagram post from @basquiat to @andywarhol with comments from each detailing a funny conversation that is based on actual events. On October 4, 1982, Jean Michel Basquiat met Andy Warhol during a lunch organized by the art dealer Bruno Bishofberger. Bruno took pictures of the two artists together. Basquiat took some photos and an hour later, his assistant went to the Factory with a painting titled Dos Cabezas.

Andy, who valued the fact of being fast declared: âIâm really jealous. Heâs faster than I am.â and then later to Basquiat: âI mean, youâre faster than Picasso. God, thatâs great.â Another of her pieces Gustav and Emilie captures a conceived post from @gustav.klimt with comments from his lover @emile.floge and the sculptor @rodin. On August 30th, 1908, the fashion designer Emilie Floge celebrated her 34th birthday. Emilie was was Klimtâs lifetime companion and his last words were âget Emile.â She inherited half of his estate, never married, and kept a room dedicated to him. It is thought that Klimt depicted Emilie in The Kiss, representing their âeternal love.â Rodin met Klimt in 1902 in Vienna and they admired each otherâs works. Rodinâs comment is based on two quotes: âAn art that has life does not reproduce the past; it continues it,â and âArt is nothing but feeling.â 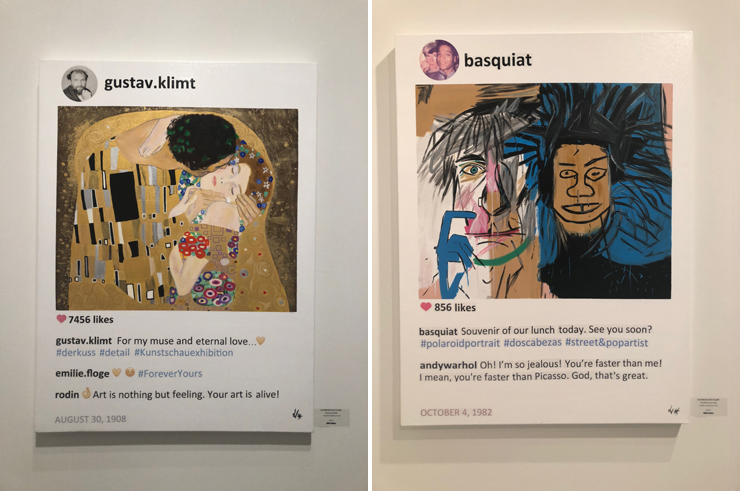 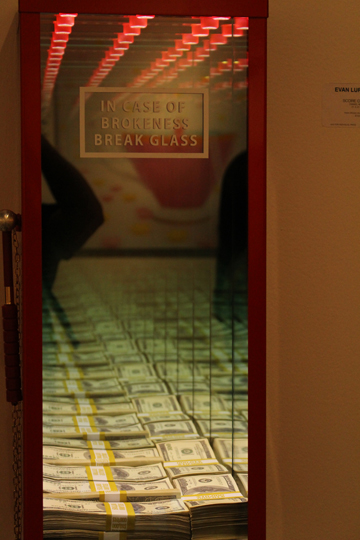 In keeping with the spirit of pretentious, flashy and humorous pieces that put a monetary spin on pop art, Evan Lurie Gallery exhibited pieces from Mr. Debonair. Inspired by Andy Warholâs 32 Cans, Mr. Debonair conceived Campbells Soup, a series of Campbell soup grenades. It was displayed next to another piece Exotic Car Series, a group of luxury car logo grenades. His work explores the explosive power of consumer brands. One could not just purchase one grenade in the series, for instance just one Campbell soup grenade, one had to buy the entire work of art. Some of his collectors include 50 Cent and Kevin Spacey. 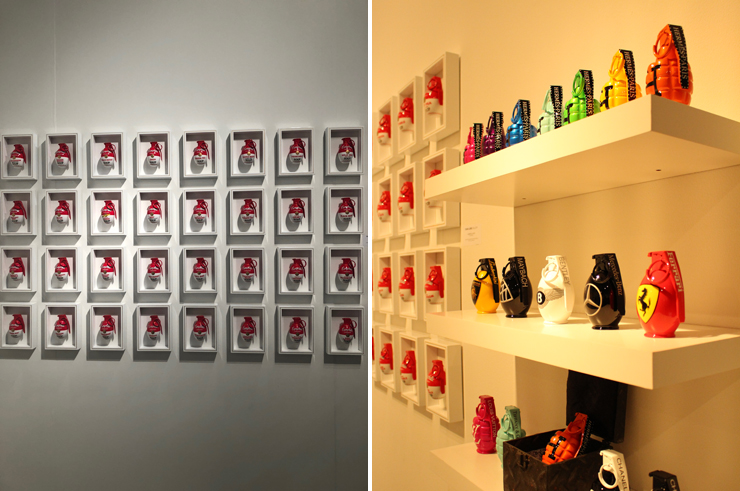 Photo on left by Monica Torres; On right, photo by Cam Culture Media. 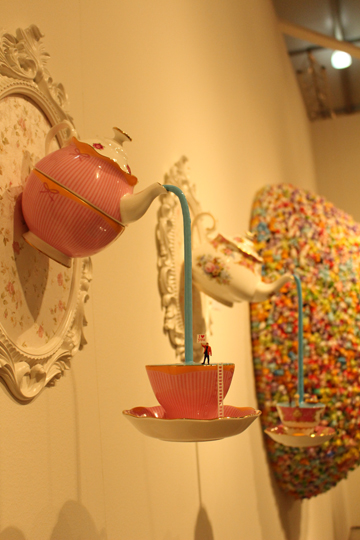 The art works from Pablo Dona that were also exhibited by Evan Lurie Gallery (Sweet and Tea Time) added to the whimsical, colorful, amusing, uplifting and fun theme of the galleryâs exhibit. 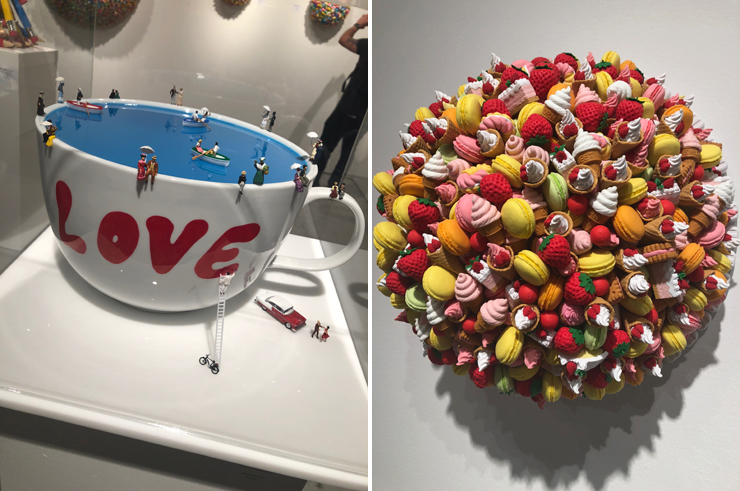 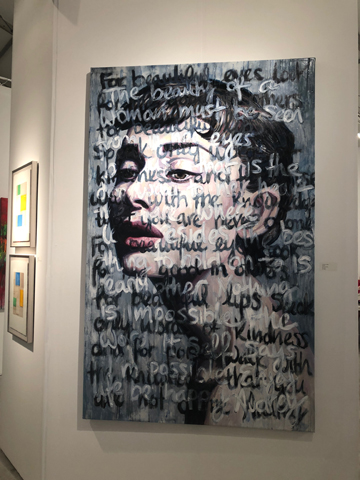 One canât go to a contemporary art fair without seeing a reproduction of a Hollywood icon like Audrey Hepburn as visible in Christina Majorâs oil on canvas titled Audrey. Itâs been done and done again, but Art Wynwood just wouldnât be the same without Warhol, Basquiat, Hepburn and other pop culture icons on display.

Overall Art Wynwood kept a sense of humor presenting some works that just made people smile and laugh among the more serious, impressive pieces from contemporary art masters. Yet all the while, the fair adhered to its promise of contributing to the community through a series of charitable enterprises. The VIP preview night benefited the Institute of Contemporary Art. And, most recently, they gifted 50 percent of their box office proceeds to the victims of the Marjory Stoneman Douglas high school shooting. We encourage you to donate to help provide relief and financial support to the victims and families of this horrific tragedy. DONATE NOW