But theater also has a responsibility to jolt us out of complacency and apathy by forcing us to confront the ârealâ world in all its ugliness and horror.

Fortunately, Jason Odell Williams knows this and proves it through his vital, urgent and compelling drama, "Church & State" now in a production by Main Street Players.

The award-nominated piece deals with an issue as pressing as any out there â gun violence. More specifically, the piece is among several works that playwrights have penned in response to school shootings.

Some of these plays explore the psychology of the gunmen and how affected individuals and communities react in the tragediesâ aftermath.

"Church & State" focuses on how a senator and his wife respond to a shooting at an elementary school which their young sons attend.

Certainly, the play contains many lines that should resonate with youÂ â if for no other reason than youâve been watching the news with horror. 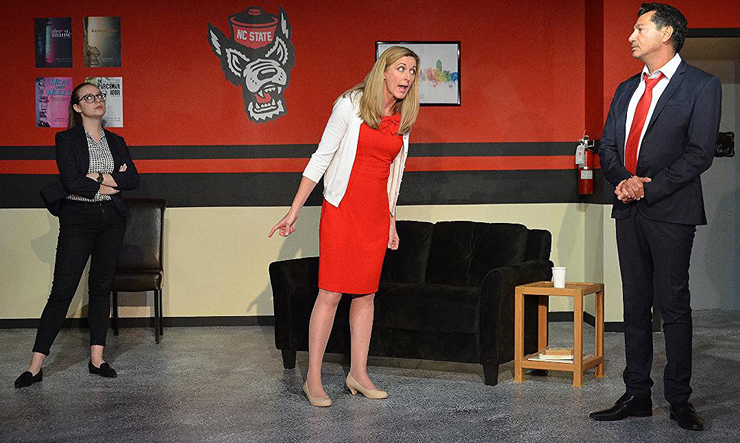 And the play should amount to required viewing for theater-goers and their representatives in Congress.

Clearly, Williams wasnât interested in penning a play thatâs too depressing to watch. For that matter, neither was this playwright content with writing a heavy, dry debate play.

Rather, the author shows us how the issues affects people. And the gifted Williams also presents both sides of the gun control issue without favoring one or the other. To his credit, the dramatist allows each character to fully and clearly articulate their viewpoint. Also, Williams demonstrates how religion, guns and politics intersect.

But perhaps most importantly, he leavens his sometimes heart-shattering play with copious amounts of humor. This makes the piece more palatable to watch.

Not only that, the play, which includes surprising twists, is also surprisingly enjoyable to watch. In fact, itâs enormously entertaining, despite the dark subject matter and the tragic incidents at the playâs center.

Audiences will likely cry, laugh, laugh while crying and perhaps re-examine their beliefs and take action to affect change.

The play opens on a Saturday evening, 20 minutes before incumbent conservative Republican Sen. Charles Whitmore, a gun rights advocate, is to address a crowd of supporters. The speech takes place three days before election day.

One of the tension-filled playâs delights is that it offers a close-up look of the behind-the-scenes workings of a campaign. And in the intimate Main Street Playersâ auditorium, we feel like a fly on the wall as we hear the jokes, bickering and strategic planning.

Anthony Linzalone imbues the senator with a charming, laid back and folksy manner. While these traits make Whitmore instantly likeable, itâs easy to also admire his fervor. Whitmore is a gifted speaker.

And to his credit, Linzalone, while delivering a speech, knows which words to stress. He also knows when to sound forceful and when to soften his tone.This performer, with his expressive eyebrows and voice, also credibly conveys his characterâs doubts and insecurity. Sometimes, this well-meaning politician needs a boost of confidence.

In a clear contrast from Linzaloneâs easy-going senator,Â BibliowiczÂ projects an uptight, urgent, no-nonsense demeanor as Alex. In fact, as Bibliowicz portrays her, the campaign manager is a fidgety bundle of nerves with a fierce determination to help her candidate win. But during more low-key scenes involving conversation, the actress finds her characterâs calmer, more pleasant side.Certainly, pleasant, loving, charming and goofy are apt adjectives to describe Antonioâs portrayal of Sara.

By contrast, through her wide eyes, she shoots accusatory glances at her husband and convincingly reprimands him for allegedly abandoning God. As far as Saraâs own belief in the Almighty, Antonio conveys this with sincerity without turning her character into a stereotype.

This taut play features just three main characters and a single setting. Itâs supposed to move with urgency. Fortunately, director Robert Coppel ensures that it does.

Under his guidance, the play proceeds at just the right pace. Moreover, the humor works. It does, thanks to the castâs deft comic timing and the sincerity with which performers imbue their characters. While they honor the playâs darkness and tragedy, they donât let it take over the production. That would make the play unbearable to watch. 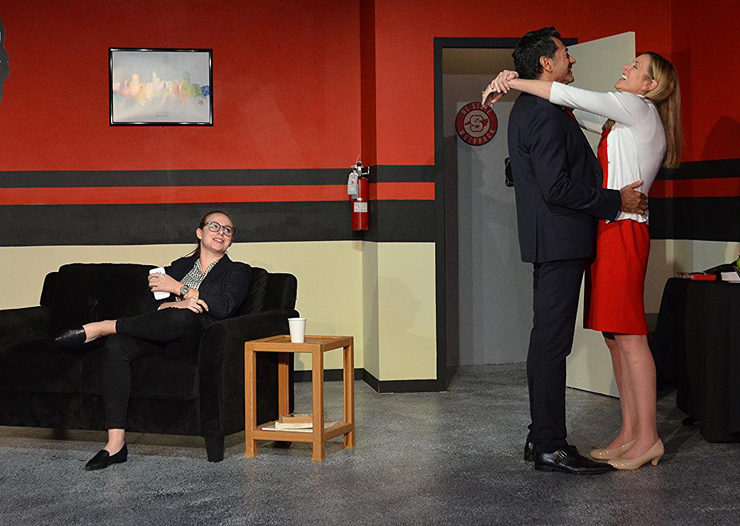 Whitmore represents a rare breed of politician; in addition to being torn and a bit naÃ¯ve, heâs honest. In fact, heâs honest to a fault. And so, one can view "Church & State" as a cautionary tale against too much honesty in politics.

Following the funeral of two boys killed during an elementary school massacre, a self proclaimed âreporter" asks Whitmore, âDid you turn to prayer in your time of need?â

But is the blogger referring to Whitmoreâs personal need, or his political need to merely offer âthoughts and prayersâ to victims, rather than blaming guns for the tragedy and upsetting his constituents?

Regardless, the senator's answers ignite confrontations with his devoutly Christian wife, Sara (a loving but reprimanding Christy Antonio) as well as his liberal Jewish campaign manager, Alex (a credibly uptight Melissa Bibliowicz).

As a result of the interview, a crisis erupts within the Whitmore campaign.

For instance, consider these words which Whitmore uses during a speech. âIâm a proud gun owner myself. So you should know Iâm not here to take away your rights. Iâm here to protect them. Protect the most valuable one of all: Life! For we are all endowed by our creator with certain unalienable rights.

âBut Liberty and the pursuit of happiness donât mean squat if youâre worried about taking a stray bullet to the head while youâre out shopping for a toaster. And while I firmly believe in our God-given right to protect ourselves, I donât think our Founding Fathers in their infinite wisdom could have foreseen firearms being sold at a mall right next to that toaster.â

The passage contains some of the playâs affecting words. In regards to the playâs comedy, some lines make us laugh more than others. Alexâs dry humor should result in hearty laughter. Also, Saraâs meddling in her husbandâs campaign and her silly remarks should cause laughs. In addition, Charlieâs conundrum might bring to mind a past president.

Did the senator actually say he doesnât believe in God?

Sara: Oh Lord. You did say it, didnât you.

Charlie: No â I did not say those words.

Alex: We are not here to debate the word âISâ with you, Bill Clinton.

On a more serious note, the playwright poses questions about the nature of God and belief. This helps break the ice between Sara and Alex. And it demonstrates how different peoples of faith have more in common than some might think.

Williamsâ partial focus on Sara and Alexâs relationship is one example of how this play isnât merely an issue-driven piece, but a relatable one about people.

Certainly, one particular moment in the play will move anybody. In the scene, the senator explains that his otherwise fearless 9-year-old son declined to celebrate his birthday at the movies; he was too afraid that a gunman would shoot up the theater. And the senator doesnât want his children to grow up in a world in which such fears are the norm.

While Williams doesnât demean his characters, he doesnât venerate them either. He's created imperfect humans with feelings. Moreoever, their hearts are in the right place. 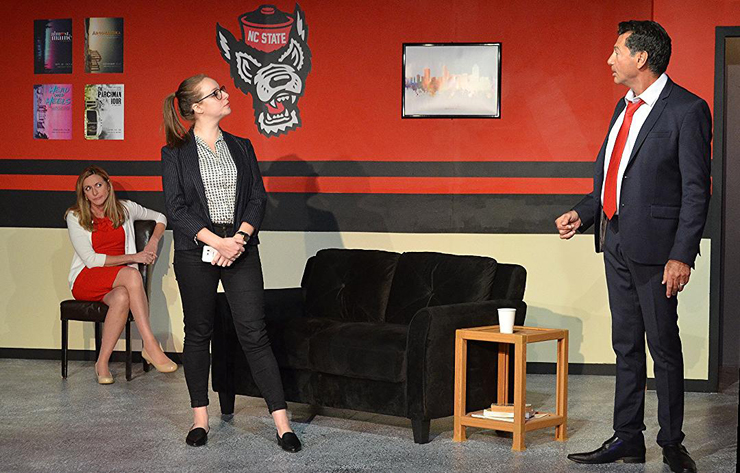 As a couple, Antonio and Linzalone make us believe the senator and his wife have passionately loved each other for many years. And director Coppel, through his deft staging and sensitive direction, has found ways to visually express this deep love.

Behind the scenes, Jade Mesa, with help from Dennis Lyzniak, has designed and constructed a roomy set that clearly places us on NC Stateâs campus. The set is detailed enough without calling too much attention to itself.

Meanwhile, Amanda Sparhawkâs lighting design lacks variety. Still, it places the necessary focus on the performers, who wear Chenjerai Weirâs character-appropriate costumes. The actors stand out not only because of their clothes and the lighting, but as a result of their multi-faceted, natural performances.

Credit must also go to Main Street Players for picking such a timely, moving play to open their season.