Jen (Lexi Langs) and Macy (Stephon Duncan) share an intimate moment as a married couple in "The Cake." Photo by Justin Namon

If only the key to a perfect world entailed giving everyone a piece of cake, wouldnât that be sweet?

And, surely it would be swell to simply follow a recipe's directions to a "T" in order to lead a conflict-free, Camelot-like life.

But alas, inner and outer conflicts arise. For instance, sometimes one of our values doesnât quite jibe with the nature of a customer's order. The two donât fit together as well as, say, butter and sugar in a perfectly baked cake.

Indeed, Della painfully realizes this in "The Cake," presented by City Theater at the Carnival Studio Theater inside the Adrienne Arsht Center. This taut, well-prepared, 90-minute play without intermission by Bekah Brunstetter contains most of the ingredients necessary for quality live theater. Namely, the pieceÂ is relatable, frequently touching, humorous and thought-inducing. One of its strengths is that the four characters harbor strong desires.

The playwright has added a dash of sultriness among some of these yearnings, yet not quite at the level of Tennessee Williams. Also, "The Cake" might not contain the kind of poetry for which Williams is so well respected. However, Brunstetterâs play features snappy, clever dialogue and equal parts pathos and humor.

Credit director Margaret M. Ledford for deft pacing. Also, she strikes the right balance between seriousness and sweetness, touching scenes and humorous ones.

The story takes place in present-day Winston-Salem, N.C., Brunstetterâs hometown. In particular, the playwright sets her scenes in a couple of bedrooms, in addition to a well-respected bakery owned by the ambitious and religious Della. Her conservative values put her at odds with a request from her late best friendâs daughter, Jen. 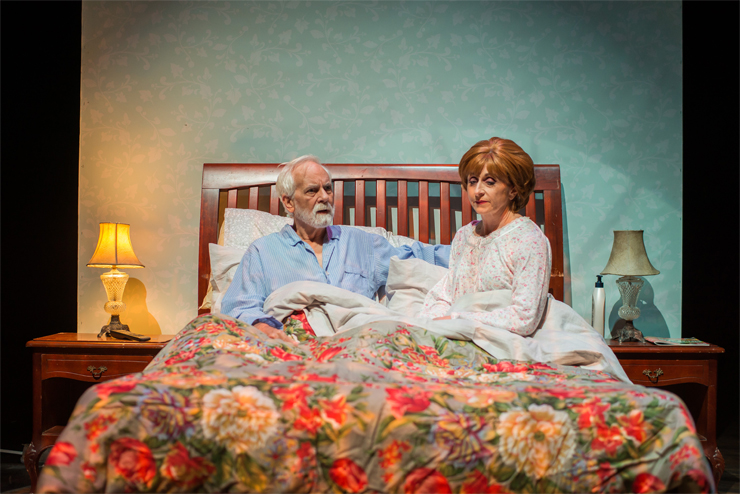 Ever since Jenâs mother died, the younger woman and Della have been practically like family. But nothing could have prepared Della for the request Jen springs on her. That is, the latter woman wants Della to bake a cake for Jen and her soon-to-be newlywedâs wedding. The only problem from Dellaâs perspective is that Jen is about to marry a woman.

Like Tevye in "Fiddler on the Roof," Della will have to figure out how far sheâs willing to bend from her firmly-held beliefs. Sheâll need to compromise somewhat in order to adapt to an ever-changing world. It is one in which gay marriage is not just legal, but quickly becoming a new normal. And for Della, itâs happening at a dizzying, rapid pace.

âI just I canât move so fast, I need a minute to sort it all out!,â Della says. âI-I am tryinâ I am open to change, I just I canât do it overnight, I got a brain and a heart at war.â

Such inner conflicts are what pull the audience into the play, allowing an opportunity to relate to the charactersâ struggles and desires.

Of course, Jen and her soon-to-be-bride, Macy, adore each other. More than anything, they wantÂ to spend the rest of their lives together.

Meanwhile, Dellaâs strong wish is for her equally conservative husband, Tim, to make love to her. Their tense relationship, in which Tim is mostly the boss, stands in stark contrast to the happy bond between Macy and Jen. With Tim dictating Della's actions, (âYou're not making that cake," he tells her), will she be able to make up her own mind?

Della also badly wants to win a baking contest titled The Big American Bake-Off. To some, this almost might seem like an unnecessary subplot. However, a contest announcer (we never see him on stage, butÂ hear his voice) almost serves as Dellaâs conscience. As things turn from bad to worse for Della, this man (the sarcastic voice of Daniel Llaca), torments Della. He practically serves to remind her and us of her close-minded ways. However, he overdoes it at times.

Voice: Are you a bigot?

Voice: Are you surrrrrrrreeee...Welcome to the show, bigot! Bake, you undesirable bitch. Of course, Della is anything but. And Irene Adjan, who plays the character, never turns us against Della. Quite the contrary, she charms us in the beginning as sheâs preparing a cake. With a southern, bright charm and a self-assured manner which never borders on arrogance, Adjan wins us over. To her credit, Adjan, a short woman with reddish hair, makes us feel as though weâre in the bakery with her as her guests. She adopts a conversational, convivial tone.

Naturally, the Susan Westfall Playwrights Stageâs intimacy enhances this friendly atmosphere. Under Ledfordâs sensitive, detailed direction, the conversation between the characters begins amiably. But as the production progresses, it grows more tense as the exchanges become more uncomfortable for all.

Adjan transitions seamlessly from a bubbly woman to a fidgety person and eventually, one who looks forlorn and torn. In fact, she searches for words to express how intensely her inner conflict hurts. She wants, desperately, to please her good friend, Jen, and her soon-to-be-wife. She justÂ canâtÂ at the moment, given her strong beliefs. As Adjan plays Della, she isnât a close-minded, Bible-thumping bigot. Rather, sheâs a well-meaning woman whose brain and heart are in conflict.

Cast member Lexi Langs credibly plays Jen, another character who feels torn. Specifically, she feels a push-and-pull between her allegiance to Della, a woman who practically raised her, and Macy, the love of her life.

With wide, expressive, sometimes teary eyes, Langs turns in a multi-faceted performance. At appropriate times, her Jen is dreamy, romantic, hyper, determined, vulnerable and exasperated. Langs conveys all of these qualities in service to a character who carries a wedding binder. Indeed, she has dreamed of her wedding day her whole life.

Contrastingly, Stephon Duncan convincingly plays Macy as a more composed, intellectual, yet impassioned and commanding woman. In fact, sometimes Macy demands answers from Della regarding the bakery ownerâs stance. And as Duncan plays her, Macy leaves no doubt that she firmly believes Della isÂ wrong.Â But credit Duncan for leaving room to convey Macyâs more-tender demeanor, particularly during intimate scenes with Jen.

Curiously, costume designer Ellis Tillman has created a more conservative outfit for Jen, and a more colorful one for Macy. It stands out more. Considering their personalities, however, the costumes donât match.

Michael Gioia, who appears appropriately costumed as Tim, lends the character toughness, tenderness and a sense of shame that he couldnât do more to please his wife.

While the characters are strong, theyâre willing to admit to their weaknesses and limitations. That is one of the playâs strengths.

Yes, these people are determined and mostly stick to their beliefs. Thereâs one exception toward the end. Without giving too much away, letâs just say it demonstrates growth from one of the characters.

Brunstetter has written a play that, without too much preachiness, personalizes a potentially controversial issue.

In fact, in 2012, seven years before "The Cake" played Off-Broadway, a real-life incident occurred, similar to the playâs plot. The case, involving a gay couple and a Christian baker refusing to bake their wedding cake, reached the United States Supreme Court. Â

This play isnât as original as, say, Dellaâs pink lemonade-flavored cake. But Brunstetterâs work, among other strengths, makes us examine our own values and prejudices.

Itâs one of the characteristics of a solid piece of theater; one without empty calories. By the way, City Theatre is the only theater company in the U.S. solely dedicated to developing and producing 10-minute plays year-round for all ages. Many know its plays as âshorts.â

However, with "The Cake," City Theatre is putting its efforts into staging a full-length play.

And just as Della, at the beginning, says that you shouldnât âskimpâ on key ingredients while making a cake, City Theatre skimps on little for this tasty, fulfilling production.

In fact, the company has partnered with several local bakeries to offer free sweets following performances.

Itâs yet another reason to indulge in City Theatre's latest offering.