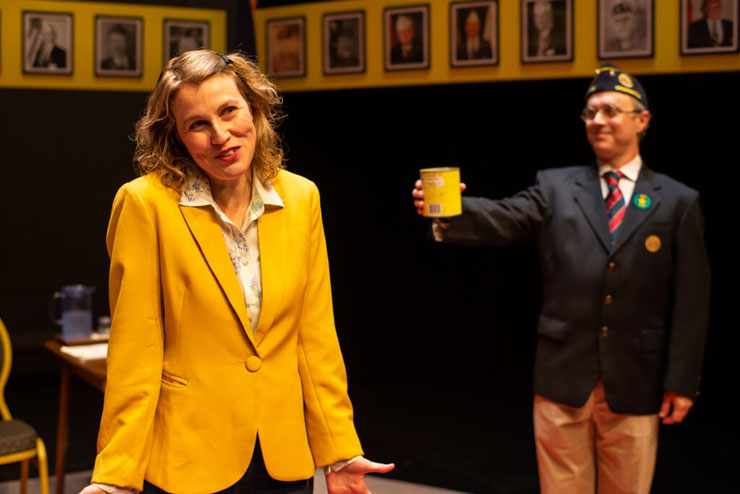 Heidi Schreck (Elizabeth Price) talks as the legionnaire (Seth Trucks) prepares to assist her in City Theatre's production of "What the Constitution Means to Me." (Photo by Justin Namon)

You do not have to be a constitutional scholar to walk away feeling moved by the deeply personal, yet universally relevant and affecting play, âWhat the Constitution Means to Me.â

Rather, you simply must care about the future of America and the document that defines the fundamental law of its government.

In Heidi Schreckâs engaging, moving, funny, and incisive play, she explains how the constitution is relevant to the life of an average American such as herself. Fortunately, Schreck does not present a dry history or civics lesson. Rather, she tells a relatable story in a clear, sincere, and entertaining manner.

Schreckâs 2017 play, a Pulitzer Prize finalist and Tony Award-nominated piece, is receiving an energetic and believable Southeastern premiere through Dec. 18 at Miamiâs City Theatre. The gripping production by the company renowned for its short play festivals is running in the intimate Carnival Studio Theater in the Adrienne Arsht Center for the Performing Arts.

Schreck, an actor, playwright, and screenwriter, grew up in Wenatchee, Washington (aka âThe Apple Capital of the World").

As a teenager, Schreck participated in debate competitions centering around the Constitution at American Legion halls across the country. She did so, in part, to vie for prize money to pay for college. But funds were hardly the only reason why the young Schreck participated in these contests. In fact, the U.S. Constitution was an obsession of hers â along with the Salem Witch Trials, live theater, and Patrick Swayze. 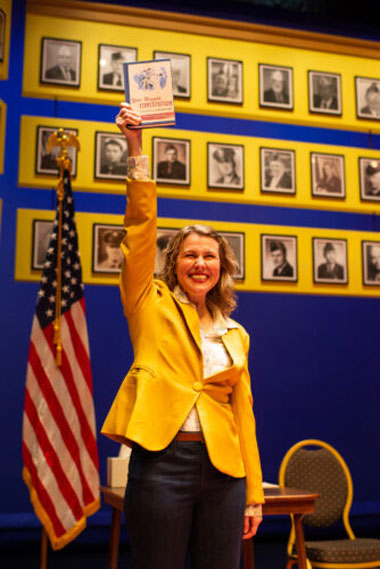 Elizabeth Price as Heidi Schreck in "What the Constitution Means to Me." (Photo by Justin Namon)

Schreck initially portrayed herself in her play. It enjoyed an extended, sold-out Broadway run in 2019. Afterwards, other performers portrayed Schreck in the piece, which experienced sold-out runs elsewhere, including Washington D.C. and Los Angeles.

In City Theatreâs production, local actor, director, and producer Elizabeth Price steps into Schreckâs shoes. The performer delivers a vibrant, believable performance that endears us to her character.

While Schreck is the main character in this inspiring autobiographical piece, it also features two other characters. Namely, they are an American Legion official (a humble Seth Trucks), as well as a young debater (a sincere Janine Raquel Johnson). She participates in a debate with Schreck during the second half of the less than two-hour, intermission-free production.

The playâs sole setting is an American Legion hall located in an unspecified city. Scenic and prop designer Jodi Dellaventura designed the set with appropriate detail. In fact, the playing space does not resemble a traditional stage, but an unconventional theater space. It is as though we are sitting not in a theater, but in an actual American Legion hall. The set rests on the same level as the audience seating area. This might symbolize the idea that we are all equal. No one person is better or âhigherâ than anyone else.

On Dellaventuraâs set, which lighting designer Eric Nelson illuminates with appropriate degrees of intensity, Schreck introduces herself to us. Also, she takes us back to her teen years. Those early years in Schreckâs life comprise the first half of the play. During it, we witness her participating in debates about the Constitution. She traces the effects that the Constitution had on four generations of women in her family, including herself.

In the second part of the play, Price, as herself, debates a young woman as to whether the U.S. should abolish the Constitution. The moderator encourages audience members to be vocal in their support or opposition to the stances. In the end, a chosen audience member decides who won the debate.

Throughout the play, Schreck shares her enthusiasm about the Constitution, but also her mixed feelings about the document. While she values it, Schreck feels that the Constitution, created by 18th-century rich, white, male landowners, has failed to protect groups of people, including women and other marginalized groups throughout history. 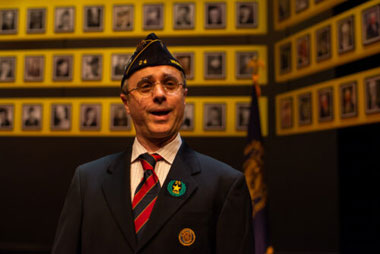 The legionnaire (Seth Trucks) explains the rules of the debate in City Theatre's production of "What the Constitution Means to Me." (Photo by Justin Namon)

While Schreck provides statistics and mentions headlines about violence against women, she also tells a true tale of physical abuse involving a close relative. In addition, Schreck talks about her own experience obtaining an abortion in an âabortion-free zoneâ in her native Washington state. Schreck underwent the procedure after getting pregnant while starring in a small theatrical production in Seattle. Schreckâs tale is all the more relevant today, with the Supreme Court having recently overturned Roe vs. Wade, the 1973 U.S. Supreme Court case that legalized abortion.

Speaking of the Supreme Court, it becomes clear during the play that Schreckâs opinion of some justices is less than favorable. For instance, Schreck cites a 2005 Supreme Court case, Town of Castle Rock v Gonzales. In the case, a woman named Jessica Gonzales requested a restraining order against her estranged husband. A state trial court issued the order, which prohibited the husband from seeing Gonzales or their three daughters, except during pre-arranged visits.

The case posed the question, âCan the holder of a restraining order bring a procedural due process claim against a local government for its failure to actively enforce the order and protect the holder from violence?â

In a 7-2 decision, the court ruled that Gonzales had no constitutionally-protected property interest in the enforcement of the restraining order. Therefore, she could not claim that the police had violated her right to due process. While Justice Antonin Scalia wrote the majority opinion, Justices John Paul Stevens and Ruth Bader Ginsburg dissented.

During the play, Schreck opines that the justices âspent very little timeâ talking about Gonzales as a person. Instead, she says, the at-times grunting justices (she mimicked how they grunted) spent a good deal of time debating the meaning of the word âshall.â

Obviously, Schreck is concerned about human rights and whether the Constitution and those who interpret it are upholding them for all citizens. In the play, Schreck differentiates ânegativeâ rights from âpositiveâ rights. A positive right requires others to provide benefits, while a negative right only obliges others to avoid interfering with someoneâs liberty.

According to Schreck, other countries have created positive rights-focused new constitutions. Why canât the U.S. do likewise? In fact, Thomas Jefferson thought that each generation should rewrite its own founding document. Then again, Abraham Lincoln said, âDonât interfere with anything in the Constitution. That must be maintained, for it is the only safeguard of our liberties.â

Speaking of improvements, it is hard to identify the need for any in City Theatreâs strong production. Margaret M. Ledford, City Theatreâs Artistic Director, directs it with care and an attention to detail.

A radiant Price, flashing a wide, bright smile that she practically wears on her face, and shining, brownish eyes, imbues Schreck with contagious, practically unbridled enthusiasm.

She gestures animatedly with her arms. At times, her body shakes with excitement. While seated, awaiting her turn in the American Legion hall to debate as a teenager, her leg bounces in anticipation. When she debates, one senses an urgency to speak about the Constitution. For instance, she leans into us. In addition, girlish excitement escapes her voice. It is as though Schreck were once again a teenager talking about a long-awaited first kiss with a sweetheart she has known since preschool. While most of Schreckâs acting choices are big, they all seem natural; nothing seems forced.

In her play, Schreck engages with the audience from the beginning. 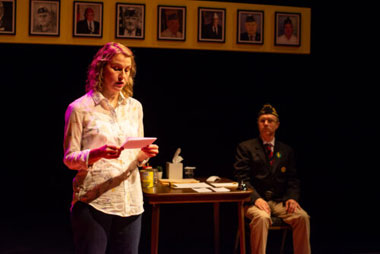 Elizabeth Price and Seth Trucks in "What the Constitution Means to Me." (Photo by Justin Namon)

âHi Suzi, itâs so nice to see you!â she exclaims at the beginning to an audience member, just after entering the stage. Also, if an audience member sneezes, Schreck says âGod bless you.â Also, while Price is portraying Schreck as a teenager, at times she steps aside and faces us, about to let us in on a secret.

Price has an easy rapport with the audience; she looks and sounds as comfortable as though she were talking to her best friend.

Price wears a yellow jacket and white shirt. For her character, they are appropriately bright colors that match her bright, radiant personality (Ellis Tillman designed the costumes).

Meanwhile, Trucks, clad in an American Legion uniform, lends the legionnaire an honorable and humble quality. Obviously, he feels devoted to helping Schreck, while remaining neutral during debate competitions. Schreck humanizes him and fleshes him out by giving the character a lengthy and touching monologue.

As he humbly addresses us, Trucks removes articles of clothing, such as his Legion uniform and hat. It is as though, by doing so, he is peeling away protective layers to expose his soul.

The beating heart and soul of âWhat the Constitution Means to Meâ is a woman who feels that the Constitution, devised by people quite different from generations of her family, has failed to protect their rights. By not only hearing but intently listening to her story, we may wonder whether the document, as written, is looking out for our own best interests. And if we feel it is not, we may feel moved to take action. Great theater can move us to take such steps.

City Theatreâs production of âWhat the Constitution Means to Meâ runs through Dec. 18. Performance times are 7:30 p.m. Thursday and Friday, 3 and 7:30 p.m. Saturday, as well as 3 p.m. Sunday. There will be an additional show at 7:30 p.m. on Wednesday, Dec. 7, but no matinee on Saturday, Dec. 10. After each Friday performance, moderator Deborah Magdalena will host half-hour conversations exploring the playâs themes with special guests. Tickets cost $55 and $60. The production takes place inside the Carnival Studio at the Adrienne Arsht Center for the Performing Arts, 1300 Biscayne Blvd. in downtown Miami. For tickets, and more information, call (305) 949- 6722, or visit www.arshtcenter.org.