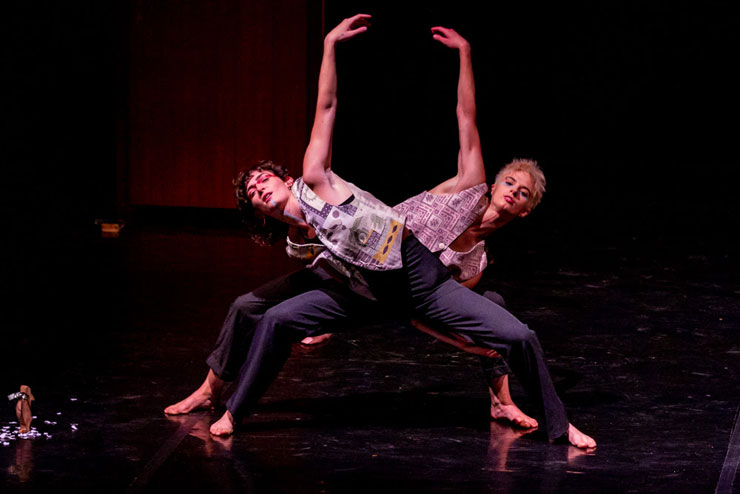 I always enjoy a visit to watch dance rehearsals in the studio. This time was no different. It was off to the Little Haiti Cultural Complex to watch Dance NOW! Miami in rehearsal for âClara,â a new reimagining and shortened version of the yearly holiday production of âThe Nutcracker.â

âClaraâ will have its world premiere on Saturday, Dec. 10 at the Miami Theater Center along with the much awaited U.S. debut from Compagnia Opus Ballet direct from Florence, Italy and Dr. Daniel Lewisâs revival of his 1974 work, âAnd First They Slaughtered the Angels.â

In watching rehearsal, one of the first things that was noticed about âClaraâ was the music. Long time DNM collaborator, composer Davidson Jaconello has drawn from the original Tchaikovsky music to create an inviting and current âjazz-esqueâ score flavored with computerized staccato rhythms, lyrical passages and mesmerizing transitions.

The music is at once recognizable and different. It flows seamlessly from one section to the next as smoothly as Claraâs journey unfolds. The multiple staccato sections provide an opportunity to see DNM dancers shine in succinctly timed motifs and vignettes as the company takes on various personas throughout the tale. 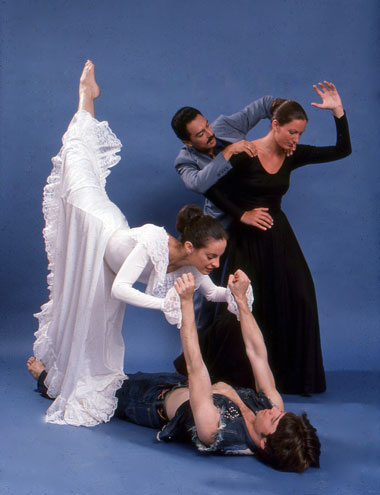 In this 50-minute version, the party/battle/snow sections move along. The storyline keeps the eye and brain engaged not to mention the moving scenery pieces that become a tree, a throne, a catwalk and chairs.

âClaraâ shows DNM in a new fashion: As much dancers as artists.

As the rehearsal continued, the latter part became "stop and start." There were kinks to work out, clarifications to be made and liaisons to be constructed. It was all part of the process and fascinating to watch.

Hannah Baumgarten and Diego Salterini, DNMâs Co-Artistic Directors, are the choreographers of âClara.â

They spoke about why DNM has chosen to do a holiday, "Nutcracker"-esque show.

âWe have thought of a 'Nutcracker' for years,â Baumgarten says. âModern companies, which we are, do not usually have a 'Nutcracker,' which pretty much all ballet companies have.â

Salterini says, âHopefully it is a recurring event that would be financially beneficial for the company, but artistically, I think we have a definite point of view, something to say that is unique to our company. It is also an opportunity to work with Davidson Jaconello who has this wonderful ability to manipulate and create music without losing the original. Itâs just really fun and interesting.â

Tandy Beal, whose work DNM includes in their rep, was a pioneer of the contemporary, inclusive "Nutcracker" in 1982. Beal has been enticing DNM with her "Nutcracker" (the name changes often) for numerous years. With financial challenges, as well as a myriad of other reasons, the Beal "Nutcracker" had never worked out. But the idea was always there.

Baumgarten and Salterini didnât want to do just another production of the traditional ballet, though. However, the thought of creating a hot and sexy "Nutcracker" "rang a bell" as Baumgarten says. 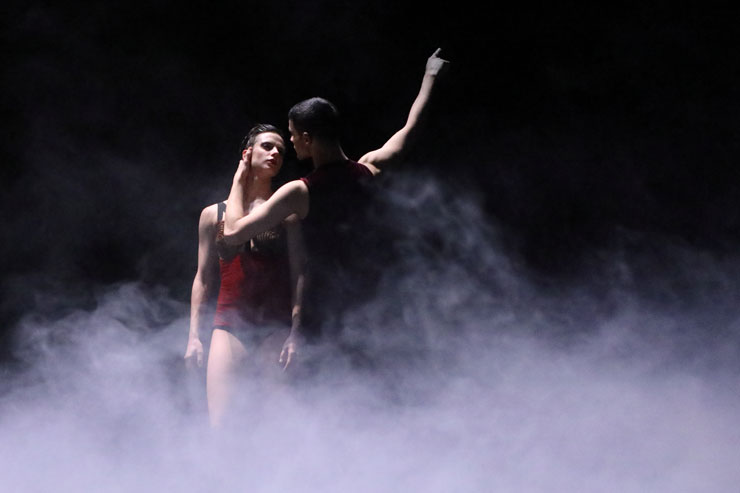 For a Holiday production the duo started doing their research. What is a hot and sexy "Nutcracker"? Is it just for adults? The E.T.A. Hoffman story, from which most "Nutcrackers" are based, provided many ideas.

âAt the party, there might be relationships, there is drinking, there is a lot going on that the children might not be privy to,â Baumgarten shares. âWe also didnât want Clara, after killing the Mouse King and saving the day, she is truly the one who saves the day . . .to spend the next hour as the perfect princess and walking back into that feminine heteronormative ideal waiting for her Prince Charming to come and take her away.â

Both Baumgarten and Salterini realized, in their "Nutcracker" story, they wanted to tell the tale of Clara and Claraâs discovery of the different levels of empowerment that people have: different sexualities, different approaches to life, and the different relationships and multiple interactions one has as a human being.

âClara goes from this rather black and white, colorless world - and then she meets Drosselmeyer and her world becomes colorful,â Baumgarten says, a twinkle in her eye. âAs the ballet goes on, and they both get sucked into relationships and experiences of this new world, there is a little twist and the tables turn a bit.â

âWe wanted to show a rebirth in a sense, of possibilities, of opportunities, a world where everything is possible, everything is new,â Salterini says.

Ultimately, they wanted to show that there is a space and a place for everyone in our world.

Baumgarten laughs as she coyly says, âYouâll have to come to the ballet to see what happens. It definitely plays into the current politico of whoâs allowed to be what.â

Especially in recent years, "Nutcrackers" have faced much scrutiny over the different stereotypes created in Act II, with sections titled Chinese, Spanish, Russian and Arabian. In the DNM version, the stereotypes do not exist.

âWe were very careful not to step on any toes,â Salterini says. âHopefully, Hannah and I have gotten rid of that aspect completely. The Arabian is a very sexy duet for two men and Spanish is a trio representing women empowerment.â

Only the Russian music makes a statement of sorts. Baumgarten and Salterini feel that they would have been remiss if they didnât address the current atmosphere. It carries even more impact as the music collaborator, Jaconello, is now living in Poland.

As a special addition to the DNM program, audiences will enjoy a revival of Daniel Lewisâs 1974 choreography, âAnd First They Slaughtered the Angels.â It has spoken word, poetry and dance. The piece was an often requested work for Lewisâs own dance company.

Working with imagery based on a variety of âangelsâ such as Hellâs Angels, good angels, dark angels, angels of mercy and angels of life, Lewis has choreographed a social satire using comedy and drama that is, at times, all too real. 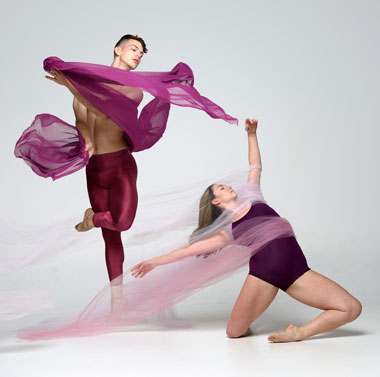 Continuing their international partnerships with dance companies from abroad, DNM is excited to finally be bringing Compagnia Opus Ballet to Miami. The visit was postponed after the DNM visit to Florence because of Covid.

Founded in 1999 by Rosanna Brocanello, Opus Ballet is a company that performs the works of multiple choreographers. The 12 dancers, most of whom have come from the Opus Ballet School, are trained to adapt and be true to the range of choreographic styles. They appear in various venues, whether itâs outdoors in a park or in a more traditional theatrical setting and are comfortable in intimate settings as well as in large-scale productions.

Speaking with Brocanello through Zoom and using Salterini, who was raised in Rome, as the translator for Italian, she explained more about the DNM partnership.

âWhile we have had liaisons in Italy, the partnership with DNM is the first that Opus Ballet has had with a U.S. company. When DNM visited Italy, it was very successful, and Opus Ballet is hoping for the same results in Miami. And our partnership will continue,â Brocanello says.

Salterini adds, âWhile the culture is different and the works are different, our companies both think and function along the same lines.â

Originally scheduled to perform excerpts from âThe Four Seasons,â in Miami, Opus Ballet has had to swiftly switch gears because one dancer broke his foot. The two years of Covid brought out many qualities in dance companies, one of which is to be resilient and ever adaptable.

They, instead, will be presenting an excerpt from "The Labyrinthâ based on the myth of Ariadne and the Minotaur choreographed by Arianna Benedetti. The work, set in a space which is entirely made up of mirrors, tells of oneâs mental and spiritual journey to find oneself. Confronting the beast, the maiden, torment, fear, love, irony, joy and melancholy, âThe Labyrinthâ is performed to the sweet and vibrant music of Massimo Buffetti.

The second piece performed by Opus will be âOtotemanâ choreographed and performed by company dancers, Sofia Galvan and Stefania Menestrina. In this work, their first choreographic creation, the duo were awarded the Dance Prospective Award, chosen out of over 800 submissions throughout Italy.

âOtoteman,â and viewing the process as choreographers rather than dancers, was a new discovery for Galvan and Menestrina. Born from their shared relationship experience, âOtotemanâ takes place in an imaginary room in a half ritual, half game atmosphere.

Galvan says, "In this space, we are sharing differences without covering them and finding solutions so two bodies and two minds can co-exist together and live in this space together.â

âThe choreography was a very natural journey,â Menestrina adds. âWe felt so lucky, we found a good relationship with each other and a way to create this piece that, for us, was not difficult.â

The ladies hope âOtotemanâ is like a meditation for the audience.

Menestrina says, âThe room is where you are free to be whatever you want to be. We invite the public to find this room inside themselves.â

Other than rehearsing, performing and seeing the sights of Miami and Florida (which include the Everglades, South Beach and Wynwood) the Opus Ballet will be teaching master classes and holding an audition on Saturday, Dec. 10 to offer placement and scholarships for its summer training program in Florence.

Salterini concludes by saying, âI always hope the audience is entertained and intrigued by what they see at DNM - and that theyâve moved a little bit with the dancers. And with this performance, I hope that everyone perhaps sees the world in a different way.â

Dance NOW! Miami performs âClaraâ at The Miami Theater Center, 9806 NE 2nd Ave, Miami Shores. Tickets are all open seating and are $40 in advance, and $45 day of the show, for the general public, and $25 for Miami Shores resident.

Advance tickets can be purchased only at www.dancenowmiami.org/events/program1.

Student tickets $5 in advance only at www.cultureshockmiami.com.

This performance includes some profanity, adult themes and content, and is not recommended for children under 13.

For more information about auditions and classes, visit www.dancenowmiami.org or contact Dance NOW! at (305) 975-8489.