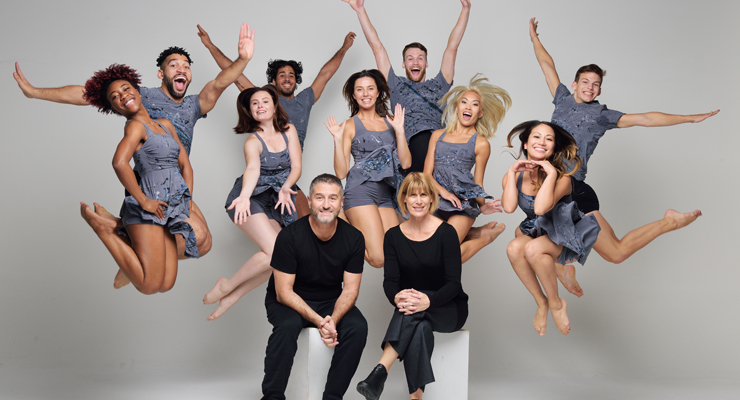 The coronavirus started to become very real to Dance Now Miami's Founding Artistic Directors Diego Salterini and Hannah Baumgarten when they were in the throes of planning to bring Italy's Compagnia Opus Ballet to perform with them in their Program II Contemporanea 2020 on March 21.

Salterini, originally from Rome, heard news that Italy was beginning to close parts of the country because of the virus.

"That's when we reached out to (Miami-Dade County Department of) Cultural Affairs and said that the company may not be coming here. I don't think anyone here had really quite processed it yet that it was going to spill over into our country," says Baumgarten.

With thoughts, like many of us then, the co-artistic directors announced that they would bring Italy's ballet company to the states for its May performance, the celebration of 20 Years of Now!, which would be at the Broward Center and the Colony Theatre. At the end of March, May seemed like it was plausible to have audiences sitting together in an auditorium enjoying a live performance.

In their hopeful announcement, Baumgarten's statement about canceling the March performance, included the news that the Italian company would join them when "we will have the opportunity to connect with our audiences in May."

"We were hopeful," says Baumgarten. But like so many other arts organizations, they saw that more and more, live performances were not in the cards any time soon.

They had begun a series of online videos, smartly tongue-in-cheek entitled "Dane Now! Miami Covid(eos) almost immediately after the stay at home orders.

(Check out the gallery of Covid(eos) here.)

"We just decided that we were going to leap in," says Salterini. When they began the online video presentations, Baumgarten explains the company still thought they were rehearsing for May shows. "So. Diego, who is a master at film and video editing, a skill he's had for decades and has contributed to the company for more than decade, put together these works of three girls dancing in their backyards, in their apartments and kitchens." But, at the time, the company still thought that restrictions would life and they would have their live performances in May, so some of the video gave a bit of a peek into that. 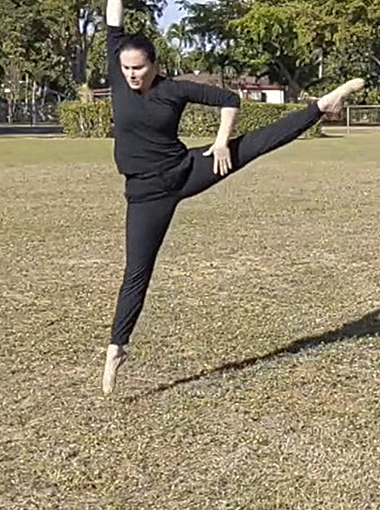 They had already made up their minds that, no matter what, they were going to keep producing. "It is only the two of us making the decisions. We were able to quickly adapt because of the size of our company. We don't have to call a million people to organize something," says Salterini.

"We decided we could afford to keep the dancers on to create content and, by paying them, honor them as well as artists," says Baumgarten.

The two participated in a non-profit seminar only a few days after the lockdown. "They gave the suggestion that (during this time) 'stop all activities, start immediately producing new activities and stabbing in the dark, as long as you continue to honor their mission,' " Baumgarten recalls.

The founding artistic directors had confirmation that what they had already begun doing was spot on.

As time grew on, it became more apparent that there would be no live performance in May and certainly the Italy's Opus Ballet would not be coming to the States.

The company is still going ahead with its Program III that was planned for May, but this will be done as a Virtual 20th Anniversary Season Finale.

The series of weekly short videos with the company, Covid(eos), also became an inspiration for the world premiere piece that will anchor the Virtual Finale from Dance NOW Miami! "Zoom, Zoom, Zoom: A Love Letter To Italy" and danced by all nine of the company's dancers.

"What we're not doing is imitating a theater performance. We're not just recording something and then showing it," Baumgarten says. 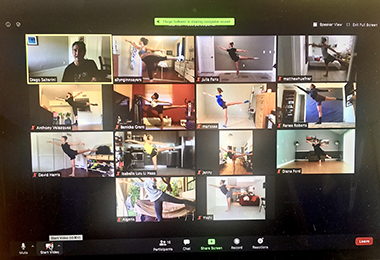 Salterini continues: "We created a completely new work. We had learned by looking at videos of other companies around the world that it is ok to indulge an artistic vision, but sometimes we want to do something that is entertaining. You can still have integrity and do something that has meaning and the technical and artistic challenge is still there, but you can do something with some levity."

"Zoom, Zoom, Zoom: A Love Letter to Italy" focuses on the virtual connections we've all had to develop during the COVID-19 pandemic. The score is made up of popular Italian music from the 1960s and 1970s and the piece's nostalgic sound honors the company's connection with Italy and how hard hit it was by the coronavirus when it became the first Western country to have the confirmed cases.

The love letter has four sections: "Zoom Life, Walls and Chairs," those speak for themselves. The third is "Pillow Will Do," which Baumgarten explains that in this quarantine era, the longing for others' touch. The final is "Let's Dance."

The evening of virtual dance will feature some conversations and video performance clips celebrating the company's 20-year history and then the debut of "Zoom, Zoom, Zoom."

I was privileged to get a preview of a bit of "Zoom, Zoom, Zoom" over Zoom, of course. It is wildly creative and not only speaks to dance and art in the time of coronavirus, but will live on as a statement to how an art form that relies so much on connection, that of the audience and of the dancers between each other, can never be replaced. But there are ways to connect with art, even in times of social distance.

"Part of the process of creating this piece is so vastly different. There's a group ethic that happens in dance, it's a communal activity that suddenly people have to do themselves," says Baumgarten.Â

The dancers are young and media savvy, Salterini says, but there were plenty of steps to be taken to choreograph and put together such an intricate piece using technology.

With the "immense" help of their rehearsal director, Alyn Ginns Ayers, who interpreted what the artistic directors wanted their dancers to do, she would give the dancers direction. Diego explains: "All the dancers would videotape themselves and I would tell them to do this part in landscape or from this angle or from another angle." There were many more steps that went into the process including Salterini's creative video producing and editing.

Baumgarten says when viewers see the piece, she hopes they are captivated from every angle.