The 'Invisible Man' Shows Up On Demand

(Two weeks ago, Universal announced "The Invisible Man" and other films, despite their openings in movie theaters only a few weeks before the coronavirus shutdown, are going on demand. The Invisible Man became available on Friday, March 20. The retail price is $19.99. A bit more than a movie ticket, but think of it as supporting the movie industry. You have 48 hours once you decided to pay for the flick to watch it.)

The stepladder stands ominously below the attic door, and Cecilia Kass hesitates. She knows her mind is not playing tricks on her, even if she can't convince anyone else, including those who are helping her during this tough period. But she's done playing the victim, and even though every fiber in her body is telling her that her life is in danger, confronting the monster hiding up there is preferable to the alternative: a life of constant torment. A new hell, uncannily similar to the one she was able to escape from. With a new wrinkle: This is a menace she can't see. Up she climbs.

A more run-of-the-mill thriller would have taken us immediately into the attic, the faster to inflict mayhem on its characters (and the viewer). But âThe Invisible Man,â writer-director Leigh Whannell's taut and spine-tingling reenvisioning of H.G. Wells' 1897 novel, adapted most famously by James Whale in the pre-Code 1930s, is not your typical genre reboot. Most filmmakers would be focusing on what lies beyond the attic door. But Whannell is just as interested in the ladder, to the point that it becomes a motif throughout the film. This is a story of transitions, of moving from a dark place into the light. A tale about someone discovering their inner strength, the very element that can make the difference between captivity and freedom.

At stake is Cecilia's sanity and well-being. The up-and-coming architect, played by the prolific and versatile Elisabeth Moss, must have thought she had it all when she embarked on a relationship with scientist Adrian Griffin, but as the movie opens, it becomes clear her soon to be ex-boyfriend's mastery of his field conceals a possessive streak that manifests itself through physical violence and, that old chestnut in abusive men's playbook, gaslighting. Cecilia has had enough, so she executes her getaway from Adrian's sleek, modern and remote abode.

But not before Whannell has a little fun quickening his audience's pulse. Get used to the button-pushing. Seeing this Universal Pictures release often feels like walking through a maze filled with booby traps. It asks for a sizable suspension of disbelief. To its credit, the movie's first half unfolds like a character study, with a generous dose of old-fashioned jolts thrown in. Cecilia knows she can't stay with her sister Emily (Harriet Dyer), because the tech-savvy Adrian knows her, so she seeks refuge from the outside world at the home of longtime friend James Lanier (âClemency'sâ Aldis Hodge) and his daughter Sydney (âA Wrinkle in Time'sâ Storm Reid).

This breathing space is a boon that Whannell uses to fill in the blanks on Cecilia. What's conspiciously scant is information about Adrian. He's an invisible man even before he becomes the Invisible Man. It's a void that's meant to convey a threat shrouded in mystery, but that decision has the adverse effect of rendering the extent of Cecilia's suffering somewhat vague. Was there sexual abuse as well? There's some hinting, but not concrete details. This is where Moss does a lot of the heavy lifting. The âHandmaid's Taleâ star is not afraid to show you the vulnerability beneath Cecilia's steely resolve. She doesn't hold back. In this, and quite a few other regards, the character is reminiscent of the cursed bank employee Alison Lohman played in Sam Raimi's âDrag Me to Hell.â 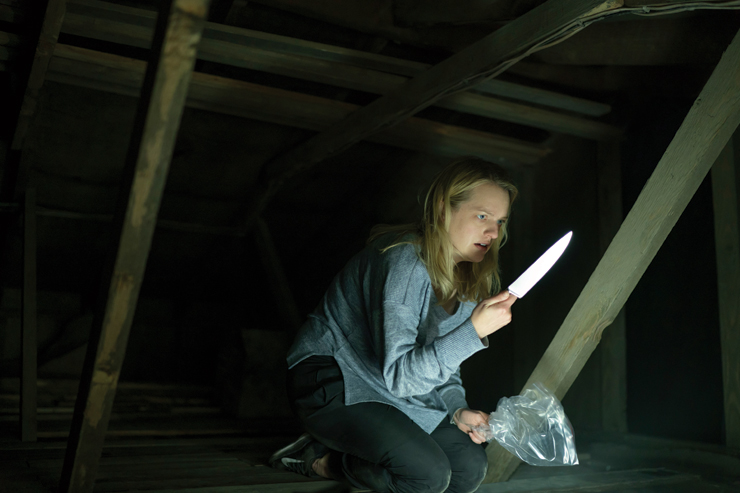 That rollicking and cheeky horror movie also comes to mind when Cecilia's fragile, hard-fought harmony begins to unravel, even after she's told by Adrian's brother Tom (Michael Dorman) that the manipulative bastard has offed himself. The source of her escalating distress? A sense that she's not alone when there's no one else in the house. A violation of privacy that, loved ones insist, is all in her head. And so, the titular entity taunts her like a cat toying with a mouse. At this point, one might raise a red flag. How does âThe Invisible Manâ reconcile the severity of its subject matter with its playful genre trappings? Here's where Whannell's command of the medium comes into play. Despite the dearth of specifics, he always takes Cecilia's pain seriously. He also takes the time to escalate the tension gradually, so the character's arc doesn't get lost in the meticulous mise en scene.

Cecilia's inability to make others believe what is happening, then, is never just a plot point, but a metaphor for the loss of identity and self-worth domestic abuse victims experience. Someone who's experienced mental health issues might also see their struggles personified in this intruding force. Whannell, best-known for his low-budget artificial intelligence thriller âUpgradeâ (think âRoboCopâ by way of âEx Machinaâ) deftly mixes camera placement, sharp cuts and layered sound design to play viewers like a piano. The Aussie helmer's brash confidence behind the camera is matched by technical chops, something made even more evident now that he's working with a studio budget. But he has made a thrill ride with a conscience, a pulse-pounding foray into mad scientist territory that shifts the focus from the patriarchal Dr. Jekyll/Mr. Hyde figure to his victim. No, no longer a victim. An avenging angel who faces seemingly insurmountable odds in order to climb that metaphorical stepladder. 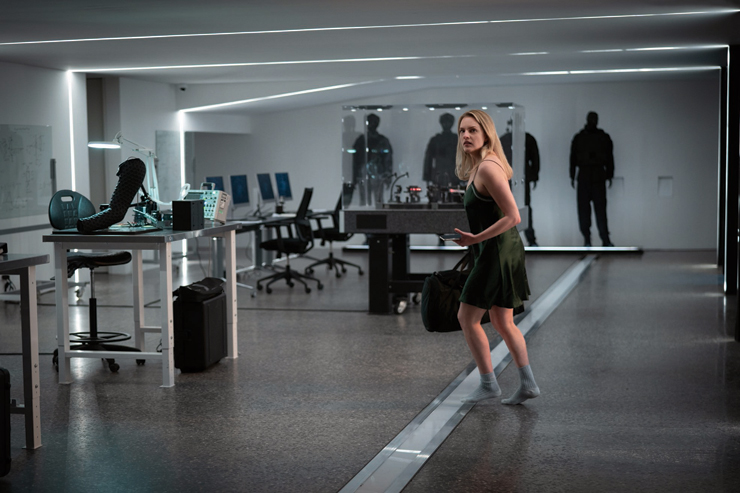 What holds âAn Invisible Manâ back from being an even more satisfying genre piece, besides an overbearing music score that slaps together Herrmannesque strings with booming chords that recall Hans Zimmer at his most phoned-in, is a third act that piles on the curveballs and false endings. Did we really come all this way for a resolution that feels like an R-rated episode of âScooby-Dooâ? It needed more of the nasty sting of, say, the films of Joseph Ruben, like âThe Stepfatherâ and âThe Good Son.â Actually, Whannell's film often plays like Ruben's own âSleeping with the Enemy,â that comparably disposable Julia Roberts thriller, with a sci-fi twist. It only occasionally recalls âHollow Man,â Paul Verhoeven's 2000 thriller, and that's for the best, since that film paired sensational visual effects with a silly and needlessly mean-spirited storyline. Whannell's film actually acts as a corrective to Verhoeven's ill-conceived depiction of sexual assault. 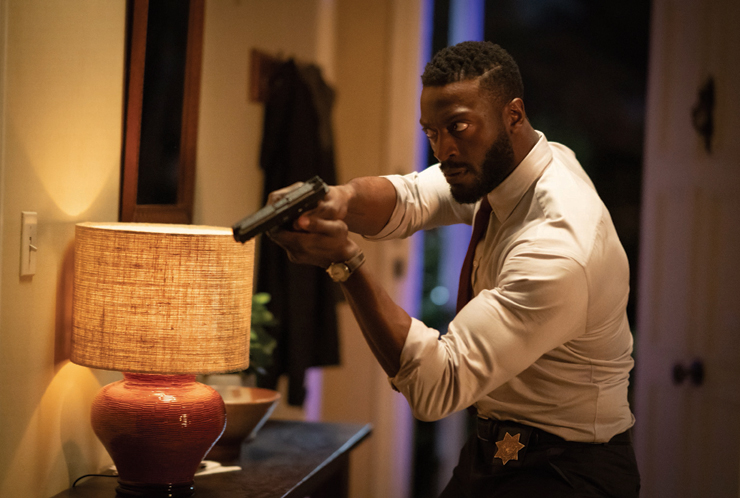 James Whale left some pretty big shoes to fill when he made his witty and surprisingly dark 1933 adaptation starring Claude Rains, one of Universal's better monster movies. Whannell's film isn't quite at that level, mostly because Whannell the screenwriter still has some catching up to do with Whannell the director. But his spiffy remake is mostly able to sustain that sweet spot between cheap thrills and sobering drama. (My gut tells me he's on the verge of making something really special.) He's made a chillingly effective experiment in audience manipulation that doesn't vanish into thin air.