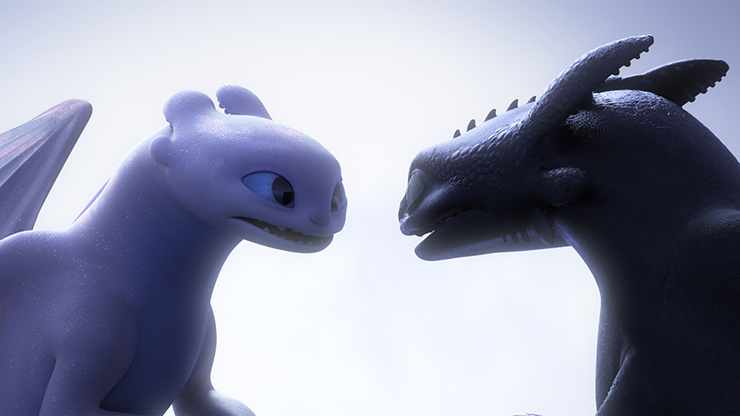 Seeing "How to Train Your Dragon: The Hidden World" is akin to running into an old friend. It doesn't take long to remember what made your bond so special, even as you acknowledge your best days together are behind you. For esteemed director Dean DeBlois, it's a well-earned, albeit rather tame, victory lap that closes out a pretty darn solid trilogy in handsomely rendered, richly moving fashion.

Part of what makes the "Dragon" films, loosely based on British author Cressida Cowell's series of fantasy books, so endearing is that they tap into the primal connection between children and animals, particularly those wild creatures we're told to keep our distance from. The fictional Viking village setting gives a distinctly Scandinavian yet pretty universal appeal to these stories that focus on rites of passage, tests of courage and selfless sacrifice. The movies give a fresh, computer animated spin to the gratifying, one-size-fits-all pleasures of, say, "Born Free," "Benji" and "The Black Stallion." At their core, they're a stimulating variation on the boy-and-his-dog template that stand out for their refreshingly mature approach to coming-of-age challenges, including losing a limb (Part 1) or a loved one (Part 2). They also never fail to give viewers all the feels. 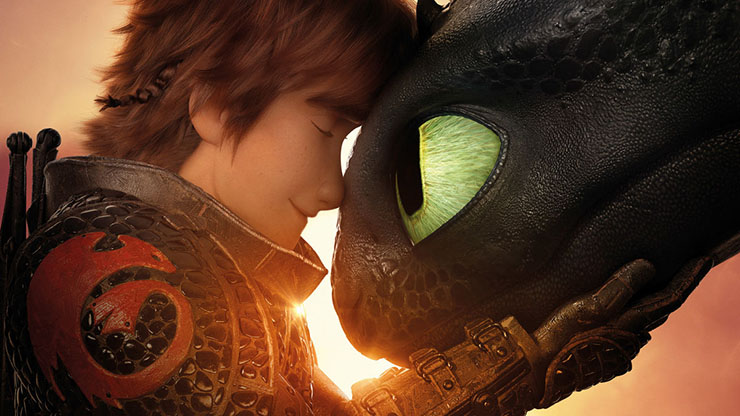 The third "Dragon" picks up about a year after the events in Part 2, to this reviewer, far and away the strongest chapter in the trilogy. DeBlois, who co-directed the first entry with his "Lilo & Stitch" collaborator Chris Sanders before going solo for 2 and 3, assumes viewers have seen the first two films. (If you haven't, what on earth is wrong with you? Also, you should stop reading further, because I'm about to go into a couple of spoilers.) Berk stands transformed from a dragon-fearing society to a vibrant yet overpopulated community where the fire breathers and humans co-exist in photogenic harmony.

At its helm is Hiccup (the voice of Jay Baruchel), the young chief who had this Herculean responsibility thrust upon him after his father, Stoick the Vast (Gerard Butler), died saving him near the end of Part 2. By his side is Toothless, an obsidian-colored dragon believed to be the last of the Night Fury species. True to the no-nonsense, tough-love nature of this franchise, the cute yet untamed (mythical) reptile was Hiccup's sworn enemy before the young lad's paradigm-shifting efforts. 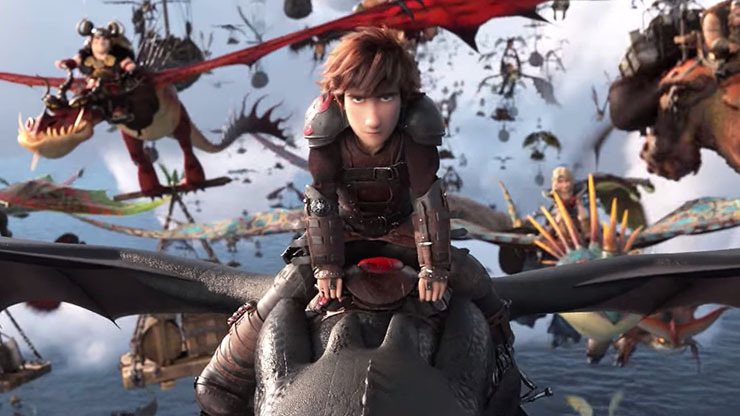 Jay Baruchel is the voice of Hiccup in "How To Train Your Dragon".

"The Hidden World" starts out with a swashbuckling flourish, as Hiccup and his friends pull off a brazen yet awkwardly executed nighttime rescue of several trapped dragons from a ship. "That was a little sloppy," quips Astrid (America Ferrera), Hiccup's kickass comrade-in-arms ... but don't you dare call her his girlfriend. She's got a point, about the quality of the extraction and the sequence itself, which has a nice "Order of the Phoenix" vibe yet feels scattershot and all over the place.

But any doubts as to whether DeBlois, who took nearly five years in between the past entry and this one, is rusty are soon allayed when we're introduced to the central theme this time around: what it means to lead. Hiccup's capabilities are constantly being pushed into the spotlight, but what's shrewd about DeBlois' screenplay is that his protagonist's self-doubt and Berkians' skepticism about him never feel like they're serving a formula. The burden of leadership, rather than the means to a narrative end, allows the character to grow and mature right before our eyes. He makes sound decisions, and he also makes mistakes, and his imperfections make him all the more compelling.

Next to this weighty thematic depth, Toothless' courtship of a white, translucent female Night Fury, dubbed a "Light Fury" by Astrid, feels like child's play. It becomes clear DeBlois has chosen to make "The Hidden World" more appealing to pint-sized viewers than usual (if you don't count the TV series "DreamWorks Dragons," which bridges Parts 1 and 2). As a result, the new film often feels a little too safe, its plot overly familiar and occasionally too tidy for its own good. There's nothing inherently wrong about this soft-pedaling, because DeBlois never sacrifices character development. I'm hard-pressed, for instance, to think of an American children's movie franchise with such a pragmatic view of romance as this one. The Astrid-Hiccup scenes are about as wise and unsentimental a depiction of a relationship as we're likely to get in this context. And yet, it's hard to shake the notion that "The Hidden World" is somewhat hobbled by its sense of complacency. DeBlois appears so intent in sending family audiences home with a smile on their faces that the strain shows. Ironically, Parts 1 and 2 are darker yet are also the more satisfying popcorn movies. If the first film, with its exhilarating flying sequences, is this franchise's "A New Hope," and its sensational, deeply affecting sequel is "The Empire Strikes Back," Part 3 definitely feels closer to "Return of the Jedi." Only replace the Ewoks with utterly adorbs scaly critters. 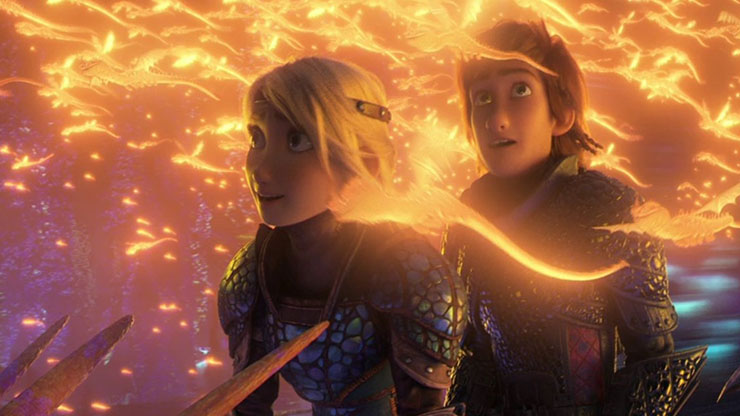 America Ferrera and Jay Baruchel have voiced characters since the first installment of "How To Train Your Dragon" was released in 2010.

And replace Darth Vader with the cunning Grimmel (F. Murray Abraham), a mercenary who relishes the thrill of the hunt when it comes to not just catching but controlling dragons. Abraham, who has a patent on these oily baddies, channels Ricardo Montalban and Frank Langella, even though his character has Rutger Hauer's platinum hair circa "Blade Runner." In other words, even though his motives veer too close to a run-of-the-mill villain, there's an invigorating zeal to his dastardly machinations. He's the stumbling block this movie sorely needs, even as the story skimps on the element of surprise.

Hiccup takes drastic action to prevent Berk's dragons to fall on Greimmel's hands, embarking on a quest to find the titular dragon utopia that Stoick also searched for, while also trying to make sure his tribespeople stay safe. (It helps that the derring-do is accompanied by yet another stirring John Powell score.) The mission doesn't go as expected, which allows the Quebec-bred DeBlois to explore the scourge of xenophobia within the confines of a children's narrative. Even several months removed from the extensive media coverage of immigrant children and teens separated from their families at the U.S.-Mexico border and placed in detainment facilities, it's difficult to look at "The Hidden World's" chained dragons in cages and not see the striking visual parallels. 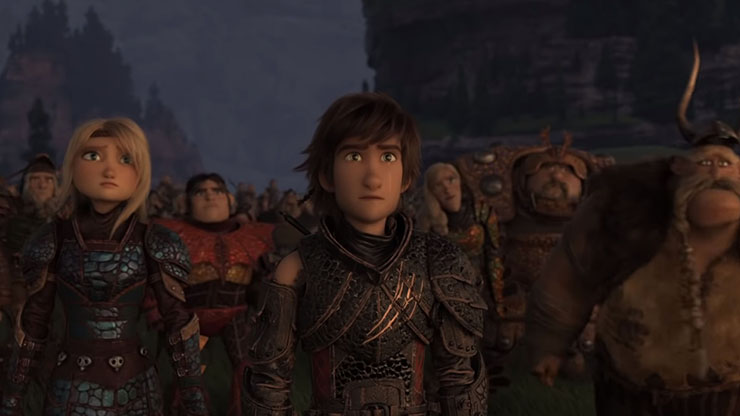 America Ferrera, Jay Baruchel, Craig Ferguson lend their voices to "How To Train Your Dragon."

And that potent imagery helps keep the film afloat even as DeBlois steers it to a virtually perordained conclusion. But beyond that, the filmmaker's affection for the characters is infectious, and it helps pull off a bittersweet resolution that targets the tear ducts without feeling too syrupy. You'd have to made of stone not to feel a lump in your throat. There's nothing groundbreaking here, and yes, the novelty of dragons gliding gracefully across the skies has long since worn off. And yet "The Hidden World," suffused with an elegiac finality, earns its tears and its tyke-friendly indulgences. So leave any animation hangups at the door and take the plunge. Become reacquainted and reminisce. Your heart will thank you.

DreamWorks Animation's "How to Train Your Dragon: The Hidden World" is now showing in wide release across the country following a successful head start overseas. The advance screening I attended was in 2-D, but I got a chance to see the trailer in 3-D, and its immersive quality is quite stunning. The tactile quality of the animation comes through regardless of the viewing format you select.